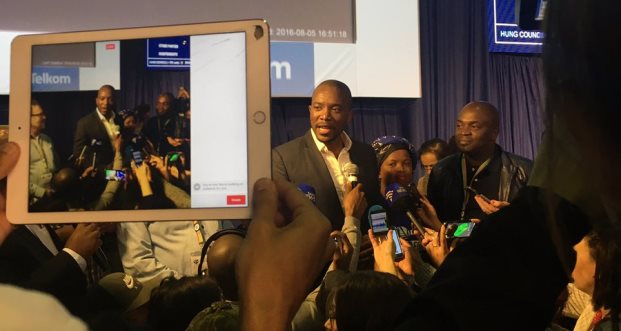 On Tuesday, at the EFF’s press conference in Alexandra, Julius Malema confirmed that one of the conditions that the EFF offered to the ANC and the DA was that Die Stem must be removed from national anthem.

He said that Maimane agreed that singing Die Stem was akin to Jews singing anthems about Hitler.

So at the DA’s presser in the swanky Radisson Blu Hotel in Sandton, The Daily Vox asked Maimane to clarify Malema’s comment.

This was Maimane’s response:

“There was a broad discussion in the negotiations about street renamings, symbolic things that come from apartheid. My response was standard – how you name Tshwane under goes public participation. Just like in anything around national symbols, etc. They have to undergo that, and many of them are guarded by the constitution.

First and foremost, I support the constitution. Secondly, I’m going to uphold my personal views about this issue. The further attribution was part of the negotiation. As a child I had to go through Die Stem as a poem as a child. So I can think carefully about that. I still hold the view that the ’94 consensus came to some agreement as to how you work through that.

I think, given South African’s consultation and negotiation, they have the freedom to discuss that. Emanating from that, let me be clear upfront that this position I’ve always had. The fight is never about the language. It has nothing to do with that. The issue for me is that if we can build a common consensus on the things that we agree on, including Afrikaans, because I am always at the forefront of building a negotiation and such for South Africans going forward.

That’s my position and that’s what I communicated.”