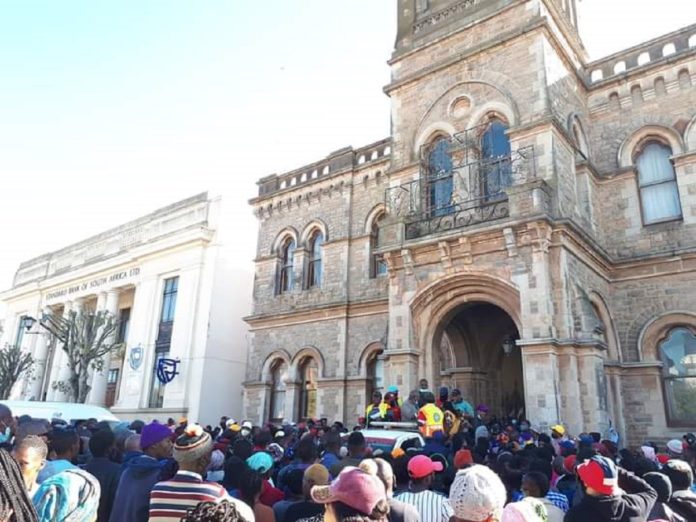 In Makhanda, between May and June, protestors shut down roads, and other access points. They were protesting jobs and decent services. In response to the protests, the Makana municipality obtained an interim interdict preventing the protesters from gathering.  These protests just form part of the much larger issue of a lack of service delivery in South Africa.

Recent statistics from the South African Police Service (SAPS) Incident Registration Information System (IRIS) show that a total of 909 protest actions took place between August 2020 and January 2021. Over 600 people were arrested during the protests. The Institute for Security Studies (ISS) found out that in July 2020, an average of eight protests occurred per day – the highest in a single month since 2013.

What happened in Makhanda specifically?

Makhanda which is part of the Makana municipality has long been plagued by many service delivery issues. The entire area faces a deterioration of public infrastructure and services. This has led to the protests which resulted in a larger shutdown of economic activity by residents and taxi drivers over several days.

Dr Hlengiwe Ndlovu, a postdoctoral fellow at the Centre for Women and Gender Studies at

Nelson Mandela University, spoke to The Daily Vox. Dr Ndlovu said what’s evident from the Makhanda protests is that even in a pandemic and with the current restrictions, people are tired. The issues in that particular community have been around since 2018. This is the story for many communities and municipalities in South Africa. During audits of municipalities across the country, many were found to be non?compliant with service delivery improvement efforts.

What are service delivery protests?

Service delivery is a phrase often used in South Africa to describe “the distribution of basic resources citizens depend on like water, electricity, sanitation infrastructure, land, and housing.”  However, due to the inability of the government to provide these resources to people living in the country, there are protests that take place to demand these services. A project by students from Columbia University showed how service delivery protests in South Africa have increased exponentially in the past 20-25 years.

When looking at the COVID-19 pandemic, one of the first directives given to people was to wash their hands regularly. However, this proved to be extremely difficult especially in places where water is a scarce or non-existent resource. Dr. Ndlovu said people will continue to contravene the restrictions because they are tired of services not being available.

Speaking to The Daily Vox, Alana Potter, a senior policy analyst at WaterAid, said service delivery is about being accountable and engaging meaningfully with the users of the services. Potter said it’s about fulfilling the promises made to people. When looking at the protests, it is not just about the failure in providing services. Just like with many other sectors in South Africa, it is about the lack of accountability.

Potter said municipalities do not address their failures. “The failure to do this and to hold themselves accountable to the people living in their jurisdiction, is key to the failure of services,” Potter said.

Do service delivery protests ever result in better services etc or rather is there an increase in suppression?

There has been an increase in the failure of services and by extension an increase in protests. But there has also been an increase in suppression by the government. Protestors are often served with interdicts to prevent protesting like in the Makhanda case. There is usually a heavy police presence at protests which is used against the protestors. All of this serves to increase the frustration of the communities.

Related: Ziyanda Stuurman asks: “Can we be safe?” and “how” in new book

“I think that the extent of social violence in our society in general, is exacerbated by poor service delivery, but mostly, by a lack of government accountability and responsiveness,” Potter said. Government is generally under a lot of pressure due to ineffective service delivery and the pandemic. Dr. Ndlovu said that is why the government is trying to suppress protestors but this is unlikely to deter people.

Service delivery protests and elections and the pandemic

During election years – whether it’s local or national – there is always an increase in protests. In 2019, there were the massive protests in the Alexandra informal settlement which led to a shutdown.

Related: “I’m Voting Even Though It’s Politicians That Let Us Down In Alex”

Related: #AlexShutDown: The ANC Did This

This year’s elections are likely to be no different especially when considering the current situation.

Dr Ndlovu said: “The South Africa majority are generally tired because of a lack of service delivery. [They are voting] over and over again yet there is no material change happening. I believe that if the elections happen, most people are not going to go out and vote.”

Dr Ndlovu said there might be decline for the ruling African National Congress but that won’t necessarily mean any increase for any of the other parties. But Ndlovu did say that there is a lot of room to push the government to do better – taking inspiration from the #FeesMustFall movement. “If South Africans could come together and impose maximum pressure on the government and economy, there will be change,” Ndlovu said.

What is the solution?

Beyond the pandemic and elections, the solution to service delivery seems simple. Government and municipal governments need to provide the services they promised to provide. When they fail to provide these services, Potter said they need to take responsibility and be accountable. Instead of spending resources on policing communities who are protesting, those resources should be used to provide the necessary services.

One of the ways this could be achieved is through the Open Government Partnership (OGP). Makhanda, through the Makana Municipality, is the first South African municipality to be a part of the OGP. This is an international model of governance that is reforming how citizens can contribute to decision making processes. This model could provide a way for local government to be responsive to the needs and demands of the people of the city.

“Makhanda’s participation in this process offers the city an opportunity to build on efforts to reorient and best configure local government to be responsive to the needs and demands of the people of the city.”