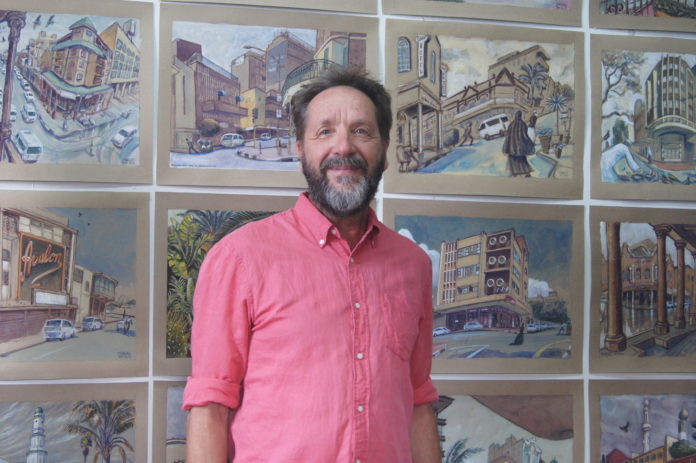 Fordsburg and its surrounding areas is a place that never rests. There is always a buzz and busyness to the area. From the restaurants to the shops, and more, the area is always full of life. It is within this environment that artist Alastair Findlay set up his studio and found the inspiration for his art and next exhibition.

From around December 2021, Findlay started posting paintings and drawings that he had been working on. The first one to appear on his social media was a sketch of the building wherein his studio was at the Lillian Road Studios. The studios are a working art gallery with rooms where different artists work. It was a simple sketch that captured a single moment with people walking across the street and cars and taxis passing by. From then on, Findlay put up the various sketches and paintings of Fordsburg, Mayfair, Newtown and the surrounding areas. They were all simple scenes of people and buildings.

Yet slowly, as Findlay continued to upload his work, there was an enthusiastic response to the work. There were, of course, the people who appreciated his art and art in general. Yet alongside those reactions, there were other reactions. It was people who had grown up in the area, who went to the schools in the area or prayed at the local mosques. While Findlay’s paintings and drawings are captures of the present moments, the medium on which they were created made them seem like moments captured from history.

That’s probably what makes the work so emotive for many. It is capturing ordinary people and street scenes but Findlay’s drawings seem to make magic out of the ordinary.

Speaking to Findlay in his studio, the sounds of the street filtered into the space from below. There is the woman from the restaurant below, singing as she prepared the onions for the dinner time rush. There are the cars and taxis speeding along Albertina Sisulu Road. In the mix, there was the squawking of the pigeons who are the standard feature of the area. Those scenes are captured in Findlay’s drawings which are all pasted on his wall – waiting for the exhibition he has planned.

The Sweet Taste Of Pakistan In Fordsburg

He said people have told him that they feel like he sees the magic in what other people would see as ordinary. Findlay said it comes from sitting in one spot and just observing what is happening around. “One sees things differently from if you were just driving by in a car and just rushing by on your way to somewhere. You get a sense of wonder. It’s nice to know that comes through in the work – a sense of what beauty is,” he said.

Findlay said he always loved drawing and art from a young age. He has also worked on different mediums and forms of art from painting, drawing, sculpting to even satirical cartoons. However, cartooning was a job and mostly a way to earn a living. He knew he had to return to fine art.

“I like to just draw the world and represent it how I see it instead of just as a job,” he said.

Call it fate or coincidence, Findlay moved to the studio in Fordsburg in December 2021. He had a studio in Craighall Park which he had to give up due to lockdown. A friend of his who also works from the studios told him that there was space available from him.

Even though he didn’t really know the area and was not used to the kind of urban environment, Findlay decided the best thing to do when he arrived was to go out and explore the environment.

It started with Findlay sitting on the street corners and just taking in the environment around him. “I cannot tell you what an incredible experience it has been like sitting on the streets,” he said. Over the past two months or so, he said he has met so many different people from unhoused people to people driving past who recognise his work. Over and above the street reactions, there has been the reaction from the people who have strong memories of the area.

Findlay said it has all been a wonderful affirmation for him that people appreciate his work. “It’s been a wonderful experience that suddenly I feel like I am part of a big community,” he said. He has even been invited for tea by the local imam – making him feel truly at home.

At the moment, Findlay has around 30 pictures completed. He wants to add around 20 more pictures to complete the collection. However, already he had quite a few favourites from the collection. One of the things he has had fun with is exploring and discovering the unique architectural gems.

He says there are some places of which he feels like he can do numerous paintings. “There are little surprises along the way – one doesn’t know what is going to work and what isn’t. But if one gets on with the work, every now and then, something exciting emerges for me,” he said.

That is what art means for Findlay: it is about looking around at the world and discovering new things. “Art is to have a sense of beauty and a sense of poetry and a way of revitalising one’s awareness of life and the world… It’s about reflecting and feeling one’s sense of humanity.”

All of Findlay’s work can be found here.