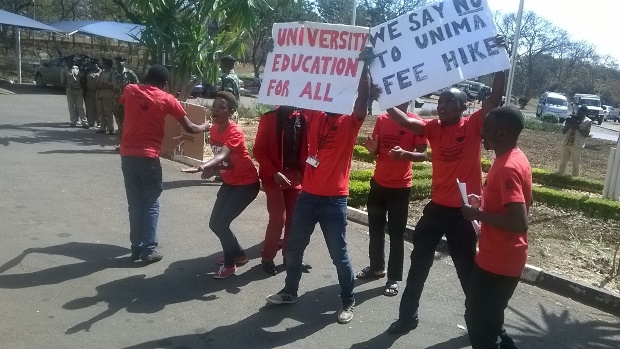 Malawian President Arthur Peter Mutharika has agreed to give an audience to University of Malawi Student Union (UMSU) leaders to help break the deadlock over the proposed tuition fee hike. BRIAN ITAI reports.

It’s a move viewed by many as the best possible intervention in resolving the disputes between students and the university council.

This follows a petition delivered to the president through the Office of the President and Cabinet (OPC) by leaders of the studentsâ€™ representatives from the constituent colleges of the University of Malawi (UNIMA), who requested for an audience with the president in his capacity as chancellor of UNIMA.

In a statement signed by the Presidential Secretary Mgeme Kalilani, it says the president has agreed to meet the student union leaders on the 4th of August at Kamuzu Palace in Lilongwe.

Since the announcement by the university council of its decision to revise upwards contribution fees paid at the public universities, students have demonstrated against the decision. Running battles with the police have ensued which has seen some arrested, public property destroyed and the indefinite closure of one of UNIMA colleges, Chancellor College in Zomba.

The students want to meet the president to try and discuss a reasonable increase with of fees, according to the president of UMSU, Tionge Sikwese.

On the other hand, the university council has stuck to its guns and they say they will go ahead to effect the new proposed fees.

Before the students’ union petitioned the president, the office of the president released a statement in which it expressed concerns with the developments that have followed the upward adjustment of fees in the public universities.

The statement said that as chancellor of the university, President Mutharika has engaged the university council to find the best way of attending to the concerns of the students, while at the same time seeking the right balance between provision of quality university education and ensuring access to tertiary education.

â€œThe President would like to assure students and parents that his government will do all it can to ensure that the Loans Board has enough resources so that all deserving students should access university education without fail,â€ reads the statement.

In a related development, the Civil Society Education Coalition (CSEC), an alliance of local and international organisations which advocate for the right to quality education in Malawi, together with the Human Rights Consultative Committee (HRCC) have issued a joint statement deploring the indefinite closure of the Chancellor College.

The two organisations say the closures of the college trigger a high degree of instability at the college and negatively affect the effectiveness of the institution.

â€œWhile the closure might appear plausible under the prevailing situation of destruction of property, such a measure ought to be temporary because if not, it might violate the right to education if it is unduly prolonged,â€ read the statement.

This announcement gave birth to disagreements which have rumbled on for three weeks, and it is hoped that the meeting between President Mutharika and leaders of the students’ union represents the best possible platform yet to bring these disagreements to an amicable end.