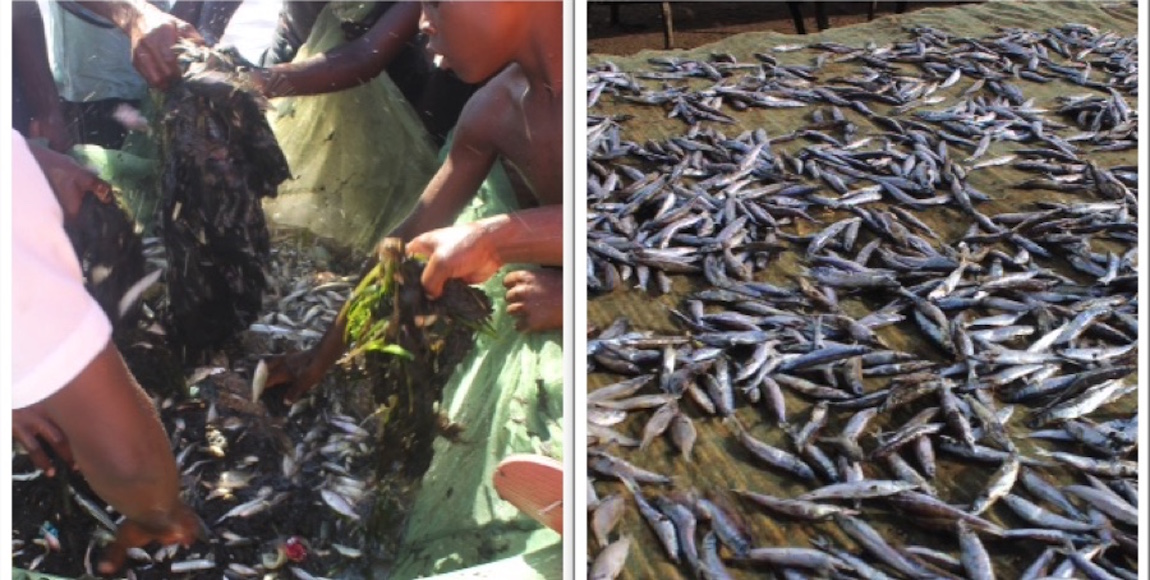 Malaria remains a leading killer disease in Southern Africa, with Malawi having one of the highest prevalence rates at 33%, according to the Malaria Indicator Survey. The government of Malawi has been distributing free mosquito nets to save the population from this deadly disease.

Interestingly, communities along lakeshore areas in Malawi have opted to use mosquito nets for fishing to maximise income in the face of declining levels of fish in the countryâ€™s lakes. Kenson Longwe, 38, is a fisherman by default. He grew up in a fishing family and he got accustomed to the fishing art from a tender age. He is now a member of Msaka village, which lies along the South East of Lake Malawi. Kenson is a father of six and has two wives.

â€œItâ€™s a question of weighing the benefits; sleeping in a mosquito net when you have no food and money is even more dangerous than malaria. Fortunately, we sleep without nets yet we hardly get malaria â€“ God has his ways of protecting us.â€ He explains this with much conviction.

As we enjoyed our conversation in the sands just less than two meters away from the waters â€“ which by the time was violent such that some drops sprung our way – Kenson was signalled by colleagues in a blue-painted boat. Apparently it was time to leave for the hunt.

Meanwhile, 20 metres away, there was a group of men and women pulling ashore a net full of fish of all sizes. I could spot happy faces, probably having been successful in a tour of duty. What caught my eye is the fishing gear – mosquito nets. This is against the Fisheries Act of 1997, which prohibits the use of such nets. Experts also condemn mosquito nets, arguing that they are dangerous because of the potential to sweep everything; baby fish, eggs, and the aquatic vegetation, which is necessary for the ecosystem. But why do they use mosquito nets? Davie Mkandawire is a fisher who has been in the business for the past 26 years. â€œYou see, fish [are] hard to find these days compared to the past, so we use every method to maximise our catch. We use recommended nets alongside mosquito nets so as to catch even the smallest fish which escapes the required nets which have big holes,â€ he reveals.

But itâ€™s against the law. Davie is quick to argue, â€œWe know.

â€œIf we follow the law how we will survive? Children have to go to school, we need to eat and everything,â€ he retorts.

The fishing sector in Malawi provides employment to over 500, 000 people and over about two million Malawians, especially those that live along lakes directly, depend on fish for their livelihood. The Annual Economic Report of 2016 indicates that the industry contributes 4% to the GDP and 70% of animal protein in the country. Last year alone, fish raked in about $162 million, which is quite a boost to the fragile economy in dire need of diversification.

Taking into consideration the enormous advantage of fish, a USAID-funded project, Fisheries Integration of Society and Habitants (FISH), is working to empower communities to take charge of sustainable management of the lake and its biodiversity. The $13.9 million project to run for five years from 2014, directly works with what are known as Beach Village Committees to sensitise communities on their role to protect the environment.

â€œWe believe in community empowerment. So, as FISH what we are doing is simply to provide awareness to the community which takes up the management role. This is sustainable because the lake and its resources belong to the community hence allowing them to take responsibility,â€ said Dr Dick Kachilonda, a fisheries expert working with FISH.

The community engagement philosophy is already bearing fruit. A few months ago, members of Beach Village Committees confiscated about 20, 000 mosquito nets around Lake Chirwa in the southern part of Malawi. This is one success story; elsewhere these committees have a serious challenge to contain some very determined commercial fishers who do everything possible to frustrate any counter-effort.

Tango Leonard is the chairperson of the Chimphamba Beach Village Committee in Mangochi district which has enacted by-laws to ensure that no one uses mosquito nets as well as protect fish breeding sites. Tango says: â€œWe use canoes, while these fishers use speed engine boats, which makes it difficult for us to effectively control overfishing and the use of illegal nets.â€

He also recalls: â€œA week ago during patrols, one of our members was [dunked] in the water as he tried to reason with the fishers. Luckily he was rescued. I wish we had better equipment such as motor boats and better weaponry like guns, we would be able to bring sanity in the lake.â€

According to the deputy director for Fisheries, Dr Steve Donda, limited staff and resources make it difficult for the department to effectively enforce the law and carry out their mandate. He however expressed optimism that with the newly adopted National Fisheries and Aquaculture Policy, things may change for the better. On the other hand, president of the Association of Environmental Journalists in Malawi, Mathews Malata, believes the media ought to provide more information on the importance of the lake and fish for community ownership, and at the same time lobby for more support towards management of fisheries.

Overfishing adding to the problem

Lake Malawi has over 800 species of fish, making it the most biodiverse lake in the world. It also accounts for 14% of global freshwater. However official statistics show that 100 species are endangered due to overfishing and bad fishing practices.

For example, the popular and high-fetching chambo fish has declined fourfold since the 1980s; currently catches for chambo stand at 4, 000 metric tonnes per annum – in contrast to 10, 000 tonnes between 1981 and 1990.

The National Fisheries and Aquaculture Policy (2016) provides more evidence on the decline of fish in the country. The policy puts the current per capita fish consumption at eight kilograms, dropping by more than 60% since the 1970s when it registered about 14 kilograms per person per year. The World Health Organisation recommends 13 kilograms to 15 kilograms of fish per person per year. But with fish becoming scarce â€“ the price has become exorbitant for most Malawians. Just one chambo fish fetches more than $2, when most of the citizenry live below a dollar daily.