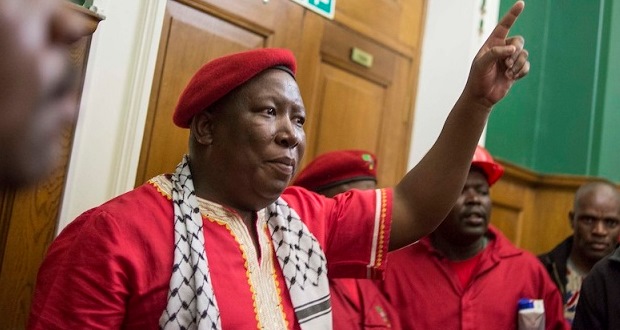 Charges of fraud and corruption against Julius Malema were dropped this week because the National Prosecuting Authority (NPA) wasn’t ready to go ahead with the case, and the judge said there had already been too many delays along the way. The NPA can reinstate the charges at a later date but Malema is claiming this as a victory. Durbanites shared their views on the verdict with ZILUNGILE MNISI. Nhlonipho Mthembu, 21, student, Marianhill
Malema was trying to divert attention by saying that there are people conspiring against him. He is an opinionated person and that is what keeps him relevant in South African politics, otherwise he wouldnâ€™t even have his own political party today. The charges may be dropped against him but I still think he was guilty of fraud, even though he was [saying] the law should take its course. I hope he celebrated too early because I would really like to see what happens if the National Prosecution Authority reinstates the charges against him. Delphine Jacobs, 35, lecturer, Durban
Iâ€™m not even sure whether he could have been guilty or not because Malema can play this game of politics. I was surprised that both charges against him were dropped; I was looking forward to the verdict. I am not a fan but he is an ambitious politician. Nothing can ever get Malema down, he always has a strategy up his sleeve. No one would have ever thought that he would make a political comeback after he was expelled from the ANC, but Juju bounced back as the leader of the third biggest political party in the country while he was already facing corruption charges. Only the brave can do such things. Sphiwe Mnqithi, 28, photographer, Durban
Malema is always drawing attention. I had even forgotten that he was facing trial because heâ€™s been pointing fingers at the president in parliament about the Nkandla money he supposedly has to pay back. I do think that his charges could have been a political conspiracy which was to somehow shut him up or keep him occupied with something that could taint his image as a politician. I also think that the opposition parties are somehow intimidated by him, because everyone has opinions about the president and his shenanigans but only Malema (especially in parliament) voices those opinions. Siphindile Nthali, 22, student, Mayville
The charges are definitely part of a political conspiracy to try and ruin his rising political career. Opposition parties see him as a threat. Malema is a visionary who has great plans to prosper and take this country to better heights. His work ethic speaks for itself. He is one of the very few leaders who were brave enough to leave the ruling party (ANC) and stand up for what he truly believes in. That’s in line with his values of being a selfless leader who believes in equal rights for all. I just wish people would understand him better because he is misunderstood due to howÂ he addresses issues and how he just does not care what people think of him. Belinda Mkhize, 24, call centre consultant, Pinetown
Malema has not matured enough to understand politics and how it works. A true political leader understands that things get messy at times. He just needs to own up to his wrongdoings, face the music and stop trying to drag everyone down with him. Malema’s ambition will be one of the reasons why his career will move from bad to worse. His approach is not right and the way he carries himself is not as a political leader. He needs to move on from thinking everyone is out to get him. I hope the charges are reinstated so that he could actually serve his time.


– Voxes have been edited for brevity and clarity.
– Featured image by Ihsaan Haffejee