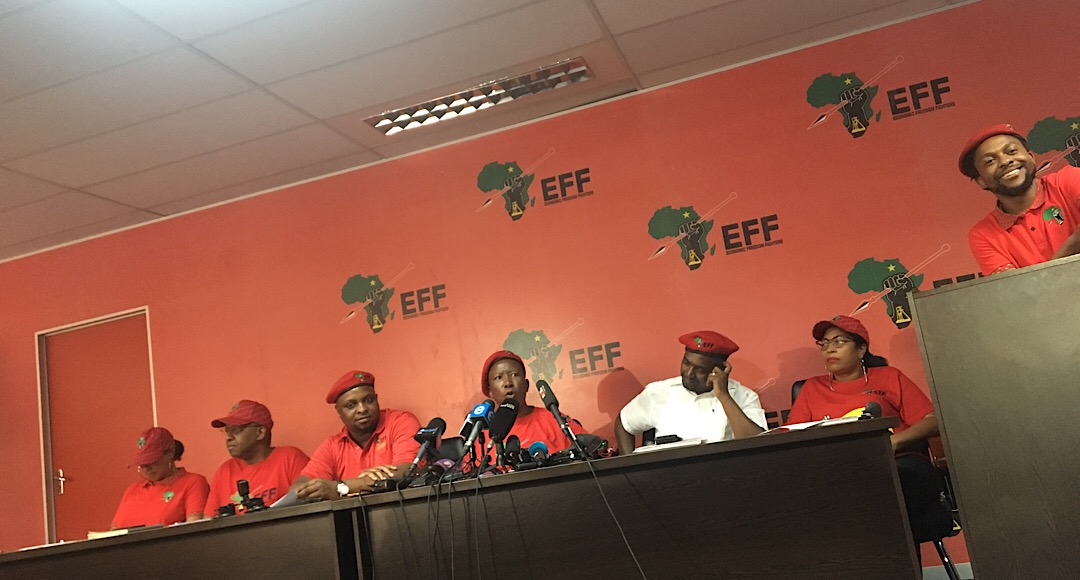 Less than a month before South Africa is due to go to the polls, the Economic Freedom Fighters (EFF) leader Julius Malema predicted the party would increase its governing base, and also said that President Cyril Ramaphosa would fail to finish a term as president of the country.

During this actual speech, Malema launched the official advert for the party’s election launch. It made reference to the Fees Must Fall and Outsourcing Must Fall campaigns. He laid out the current situation of the party’s campaign. He said the party has been on the ground from the leaders to the ground forces speaking to people and introducing them to the party.

“In the final 28 days if you are a fighter and a day passes and if you have not done a door-to-door know you have not contributed to the cause,” Malema said.

When asked about the elections, Malema said that Ramaphosa will not complete his term as president. He said a parliamentary cabinet is put together by the top 6 of a party and the conflict within the top 6 of the ANC will affect that.

“ANC is about to vomit someone,” he said. He believes that Ramaphosa’s position within the party is precarious.

The launch of Pieter-Louis Myburgh’s book on ANC SG Ace Magashule was disrupted by the ANCYL members on April 9. When asked about his views on the issue, Malema said it is anti-intellectual to burn books.

“It is anti-intellectualism to burn books. We won’t burn books about capitalism even though we don’t agree with them. You have to read books to understand what informed them,” he said.

Polls have predicted that the EFF is going to double their percentage in parliament. Malema says that the party does not put too much emphasis on the results. Instead, he said the party is working on the ground where they are seeing positive results.

Malema said they are aiming to get into the government in the provinces of Limpopo, North West, and Gauteng. He laid out the first things they will be doing when they get into government. Those include the land redistribution through the amendment of the constitution and creating a functioning of the health system. Additionally, Malema said they want to reopen the factories in the former Bantustans, therefore, creating jobs.

Malema revealed that he agrees with Pravin Gordhan’s manner of dealing with corruption without fear and favour. He just does not agree with Gordhan’s “targeting of black people.” He called out the double standard when corruption involves white people, Indian people, and even colored people

Zimbabwe and the land

Malema said Mnangagwa is a sellout for giving back the land. He also believes it is an unsustainable position and believes that the Zimbabwean President will not complete his term as president. “He is reversing the gains of the revolution,” he said.