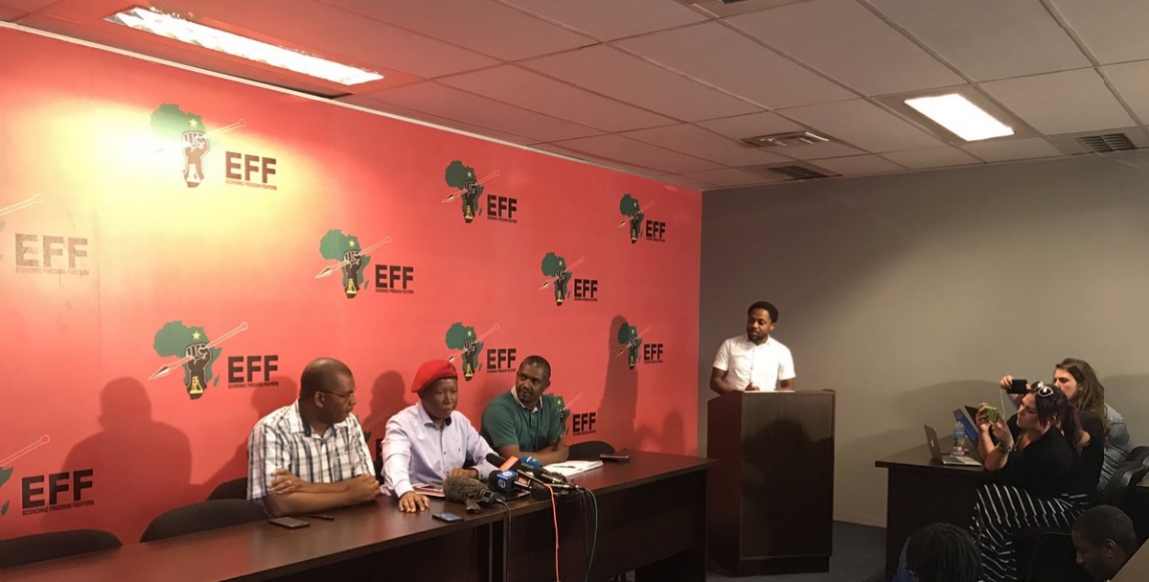 The Economic Freedom Fighters (EFF) said it is in the process of removing President Jacob Zuma from office before he is scheduled to give the State of the Nation Address (SONA) on Thursday.Â

Malema: why spend R4mil on a speech no one will listen to? We want to save taxpayers’ money. No normal person will listen to Zuma speak. People will watch Generations. #EFFPresser

â€œWe reiterate our call for the motion of no confidence to be heard before the state of the nation address. The people of South Africa do not want a criminal to deliver the SONA and the only way to remove him is through a motion of no confidence,â€ the commander-in-chief of the EFF Julius Malema said at a press conference at the party headquarters in Braamfontein on Monday.

Malema said the opposition party had not asked for a postponement of SONA, instead it had asked for a motion of no confidence to take place before the address. During the question and answer session, Malema also said the EFF is considering taking legal action to interdict Zuma against delivering SONA.
â€œThe man is prepared to defy the leadership of the ANC. He has done it before and he will do it again,â€ he said of President Zuma.

This came after the ANCâ€™s top six officials held a meeting with Zuma on Sunday night, reportedly asking him to step down as the head of state.

â€œZuma is not scared of impeachment,â€ Malema said. He also alleged that the president showed the top six the door after they asked him to step down. He said Zuma believes he has done nothing wrong, and will only be removed if he is fired.

On Monday, Business Day reported that Zuma had refused to step down after being given a â€˜step down or be recalledâ€™ ultimatum.

According to Zumaâ€™s analysis, if the ANC fires him it will lose the 2019 national election, Malema said. Pushing Zuma out will offend Zulu tribalists in KwaZulu Natal and Gauteng.

Malema also lambasted the public and the media for fawning over ANC president Cyril Ramaphosa. â€œLeave this white exaggeration of Cyril Ramaphosa, Ramaphosa is not from a lucky packet,â€ he said. He added that Ramaphosa had done nothing against corruption in the past and is a product of white monopoly capital. â€œWhen white capital praises something, you must be suspicious,â€ he said of Ramaphosa.

â€œWe shall attend to each and every clinic and hospital in our country to ensure that there are facilities, skilled staff, medicine, and a caring environment that treats our people with dignity,â€ Malema said. He added that the EFF resolves to establish a public healthcare office that will receive daily complaints, expose all public health institutions that are in a bad condition and nurses, doctors and all health practitioners who are involved in negligence, corruption, and humiliation of people.

EFF is one of the focused opposition parties, theyâ€™ve dedicated 2018 the year of healthcare, a rare practice to this other ONE

Other issues on the EFF agenda include anti-black racism, the reclamation of state-owned companies from the Guptas, the inclusion of Sifiso Dabengwa to Eskom board and the land.