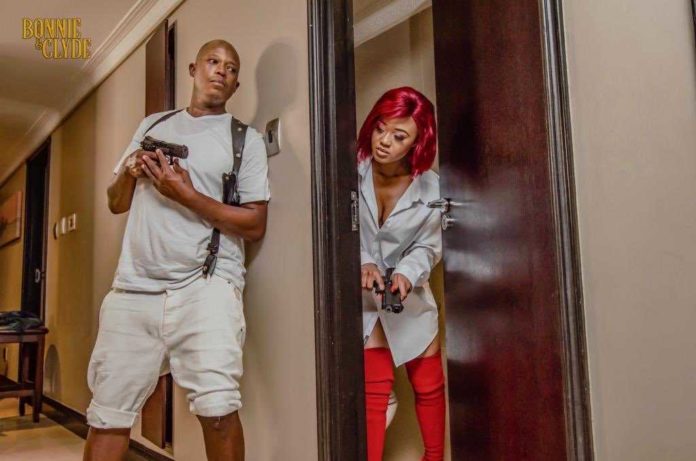 A disturbing photograph of a popular musicians Mandla ‘Mampintsha’ Maphumulo with his girlfriend and abuse victim Bongekile ‘Babes Wodumo’ Simelane holding guns while posing, has left a bitter taste for many on social media. The picture depicts a movie scenario where the lovers are holding guns and waiting for the target to show itself and let the bullet hit the flesh.

Following the back and forth court cases between the two lovers who were arrested and charged on various charges, following abuse incident by Mampintsha which was captured on live video earlier this year; the two have been seen cosy together on different  occasions including music gigs and court appearances.

On Tuesday Babes Wodumo posted a distatestful image of her and her lover holding guns in promotion of their upcoming ‘Bonnie and Clyde’ music tour.

Following a public outcry and support garnered for Babes Wodumo by many parties including activists and musicians after the abuse incident, the photograph by the gqom artist has been lashed at. It is not only disingenuous to see Babes promoting such an image considering all the cases of violence against women by their intimate partners; and for someone who has been a victim of physical abuse, it’s problematic of her to be portraying such.

Her behavior lately is questionable and problematic for many reasons as it reduces many people’s lived experiences of gender based violence to a mere hoax. As a public figure, it’s quite irresponsible and primitive of her to be promoting her work using depiction of violence.

What makes this whole situation problematic is the irony of it. As an abuse victim, one would expect her to know that there’s a probability of this imagery becoming reality. Also, the fact that we have women who were fatally shot and killed by their intimate partners, the whole image is triggering.

While analysing the whole tweet and the image, it is worth noticing that the photograph almost re-enacts the events of the night Reeva Steenkamp was killed by Oscar Pistorius; and it’s not a pretty sight at all.