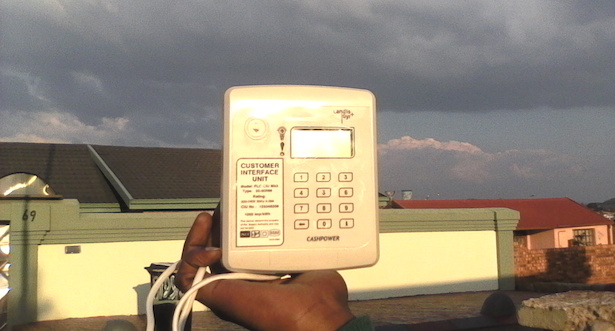 MANDLA NYAQELA went to OrlandoÂ last week to find out why residents were protesting violently against the installation of prepaid electricity meters by Eskom. This is what he found.

I am wandering the streets of Soweto in Orlando, Ward 39. Dissent and anger over the electricity meters still lingers in the air. I want to know why everyone is so upset about the pre-paid electricity meters installed by Eskom and the municipality. All hell has broken out here over these meters. but I want the people of Orlando to tell me why. Itâ€™s a late afternoon in Orlando, and I meet Xolani*, Bheki* and Dumisani*.

Xolani: We are scared, my brother, to tell you the truth, because these people jump over our walls while our gates are locked. They come into our yards â€“ trespassing â€“ just to attack us. They are the Mkhonto we Sizwe Veterans (MKV) members who are attacking us.

Me: Who got injured?

Bheki: People have been brutally beaten up and now are scared to speak up â€“ a couple of young people, about two or three.

Me: What does MKV have to do with this electricity issue?

Dumisani: During the protest, whenever you were found walking around carrying tyres, you would be spotted by the MKV guys and as a result become the victim. First, victimised by the police and arrested; then later attacked by the MKV members.

This doesnâ€™t makeÂ any sense. But okay.

Me: So why are you protesting?

Bheki: We are protesting because of these ridiculous prepaid electricity metersâ€¦ Our fridges are empty, there is no food in the house, and money goes into sustaining the electricity consumption.

Me: How much do you spend on electricity each month?

Bheki: Yoh, my brother! Surely we spend about two to three thousand rand a month.

Just as we getting to the meat of the matter, another community member entered the conversation. He wants to know where I am from. One of the brothers told him. He is an MK Veteran. I donâ€™t get his name but I estimate he is about 55 years old. I engage him.

Me: Does your electricity bill exceed R2,000 a month?

MKV brother: My brother, do you see those who have outside rooms? They are the ones who are paying about R1,000 to R1,200 a month.

Now that winter is approaching, we are going to be faced with a problem. We are going to be afraid to switch on the heaters, because of the rate which these meters run. We even take baths once a day, no more bathing twice. I want to be honest with you, my brother. You can go into all these houses to check and you will see that there is no food in their fridges due to the fact all the money is being used to buy electricity.

Hey, my brother, these meters are rubbish! In other areas it they do not run as fast as with us here.

I have a friend who stays at Protea Glen and has been using pre-paid electricity system for a long time. He has an electric fence, the geyser is always running, but he spends about R300 a month. So, I want to know why ours is charging us so ridiculously! I am telling you about my friend who does his childrenâ€™s laundry twice a week using a washing machine.

But this protest is about people not willing to pay bills, I think to myself. Me: How much you willing to pay per month?

They talk to each other.

MKV: Ok then, R500 will be better. But they should at least make it R400 for pensioners. R500 can be fair for people who are working.

Bheki: You know my brother; we have children who need lunch boxes when they are going to school and food at home. You see if you have R1,000, you can take the R400 towards electricity and use the rest for basics at home.

MKV: You see these people are liars, they claim that they have a debt of R4-billion, but in actual fact we are still paying that money.

Me: Why do you say that?

Okay, I donâ€™t know what he means. Maybe someone else can make sense of it.

Me: When did they install the meters?

MK: Now, not long, it has been about three to four months. I think it was in the second week of January. We are protesting instead of illegally bridging these meters.

Xolani: My opinion is that we should just burn themâ€¦

MKV: No we should not burn them, because if we do we will be destroying them; all we need do is grind them.

Ah, finally, some violence. Letâ€™s talk about the violence, the chaos thatâ€™s hit the streets.

Me: Soâ€¦ the people who were attacked by the MKV. Has anyone reported these cases?

Bheki: If they dare reportâ€¦ They would be killed.

MKV: Hey you know what â€“ when it comes to that allegation â€“ I donâ€™t know what it means and what is being spoken about. My outtie,Â I am a member of the MK; actually I am a veteranâ€¦

Me: Okay, so what is your take on the attacks?

MKV: I donâ€™t know what is happening. After hearing the allegations, I called the office and they said that they knew nothing about the attacks.Â There is nothing the MK can do in my territory without me knowing… It is not the MKVA responsible for these attacks. I know that because I am a member of the MKVA, a veteranâ€¦ I have a force number. You know me, I used to wear the uniform, but I do not wear it any more. And anything that will be done by the veterans in my territory, I would know about it.

Okay, he sounds a little defensive. I think it makes sense to go back to talking about the meters.

Me: Do you think it is because of the high unemployment rate that people canâ€™t pay for electricity?

MKV: Part of itâ€¦ this is an old kasi. Most of these houses are owned by senior citizens; their grandchildren are not working. In some of the houses you may find that there are only about one or two people who are working, bringing home about R2,000 a month. What can anyone do with R2,000 a month?

Me: So how do we solve this problem?

MKV: Let them take it back to flat rates: at a maximum of R600 per month, surely out of that amount they will be able to raise their R4-billion. One cannot pay R1,000 worth of electricity per month. One of the main concerns is that they lied to the community, claiming they are going to wipe off their past debts when they installed these meters. They have also lied and betrayed us from 1994 with the campaign of free electricity.

Community members are already threatening to join Mmusi Mamimaneâ€™s DA or Julius Malemaâ€™s EFFâ€¦ Can you see that these people are going to kill the ANC at its core, politically.

Me: But what about the businesses here? Have the protests affected tourism in ward 39?

I look at the other guys around me.

Me: Why did people protest, was there no other way to bring up the issue?

Xolani: We have always raised concerns with our ward councillor, but he always came back to us with inaccurate and unaccountable stories.

Bheki: This protest was meant to draw attention to Eskom and our councillor. Knowing that our area is a tourist attraction spot, because of that, they will be quick to respond.

Dumisani: Our councillor grew to be an irritating element because of his lies. He will always come to general meetings and address us in English, lying to us about coming back to us with feedback, meeting after meeting.

Again, another man enters the conversation. This man, Sâ€™bu, says he is 33, and that he was arrested for protesting.

Sâ€™bu: The police approached from the Hector Pieterson museum direction after the protest on the actual day. I was advised by the community members to take off the coat and gloves I was wearing because they had already started arresting community members and young people. The problem with this this is that a reporter from The Citizen published lies about us and as a result we do not like or trust the media.

I instantly ran home and washed my hands to get rid of the dirt from tyres and took off the coat. I went out of the house to go to the next street and that is when I was arrested. They checked my hands for residue and found that they were clean, but I still got arrested. One of the Johannesburg police officers recognised me from the previous meetings and called me by my name. As they were driving around with us on board, they came across a young lady and she was also arrested after being harassed. All in all there were 13 of us inside the Quantum: 12 guys and one lady. People were cuffed in pairs and I did not have a partner to be cuffed with, as a result I was released.

Sâ€™bu: I donâ€™t knowâ€¦ Not sure why they did but the police officer who had earlier recognised me told them to let me go.

Dumisani: You are lyingâ€¦ you paid a bribe for them to let you go!

I think itâ€™s time for me to leave. I go home with more questions than answers, but have gained some insight into the complex factors behind the electricity protests in Orlando, Soweto.

*Names have been changed.
– Featured image: by Mandla Nyaqela; illustration: By Nathi Ngubane.Â