Home The Agenda For many young South Africans, just looking for a job is a...
WhatsApp
Facebook
Twitter
Email
Print 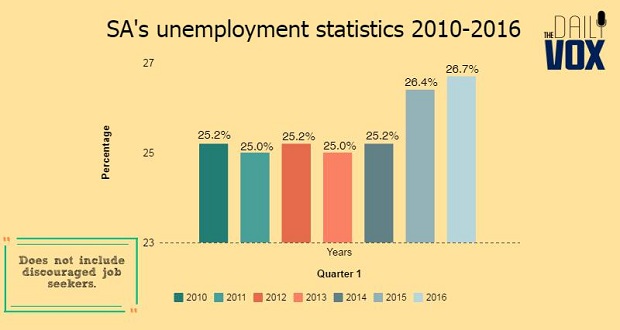 Thabiso Dlamini (@Thabiso_Dlamini) is the founder of the Twitter discussion #JobSeekersWednesday. â€œWe all know someone that is not employed and we know that unemployment is an issue in our country. So for someone who is always on Twitter, I came across many young people and graduates specifically complaining about unemployment,â€ he says. [dropcap]â€œ[/dropcap]I would not blame anyone for my situation because I dropped out of school by myself; I did not see the importance of education. Growing up in a township is hard because you get a lot of bad influence and peer pressure and most of us fall for that trap. I come to town to look for piece jobs – sometimes I get them for that short period but sometimes I donâ€™t. Without education you are nothing in this country. I read newspapers and look for advertised jobs but most of them need people with a qualification and experience, so itâ€™s useless for me.â€

â€œI thought, most young people are on Twitter, let me create an environment on Twitter where we discuss jobs. Every time I open a newspaper, thereâ€™s a job advert. So I decided to take them to Twitter – instead of people complaining about unemployment, they can do something about it,â€ Dlamini says about his inspiration for #JobSeekersWednesday. [dropcap]â€œ[/dropcap]I finished my matric then I had to stay at home because my parents could not afford money to take me to college or varsity. I think as black people we should stop the mindset that if you have matric you are educated, we should start measuring education by the university qualifications one has. It is very difficult these days to get a job with just matric because most people have matric certificates. I look for bursaries in newspapers and jobs at the same time. The only time I see job adverts with matric only requirements is on Facebook and those are usually scams or if you apply you never get a reply.â€ [dropcap]â€œ[/dropcap]I come to Durban from the Eastern Cape and I came here to look for a job. I thought it was going to be easy, but with matric only I have been struggling to get it. We usually go to the cleaning companies in Springfield to look for a job and luck has not been on my side because people have been getting jobs there, but not me. Right now, I can do anything to sustain myself and I will continue searching. I canâ€™t give up now because I have to eat and I have a child to look after.â€

Where are the jobs though?

Dlamini says he finds job postings in national and regional newspapers, and then amplifies them on Twitter.

â€œSo most of the adverts I post comes from Sunday newspapers – The Sunday Times and City Press have a section on careers with adverts of jobs. So I take these adverts and post them on Twitter, I used to do this on a Monday. I noticed that The Star newspaper also have a section for careers, â€˜The Workplaceâ€™ – this comes out in the newspaper every Wednesday. So instead of posting it on Monday, let me put everything together on Wednesday. Then I started posting #JobSeekersWednesday and that’s how it became this hashtag,â€ he says. [dropcap]â€œ[/dropcap]There are not enough job opportunities for all of us; if you want a job you must stand out or have a qualification. Even those job opportunities that arise, sometimes we are not hired because thereâ€™s a lot of nepotism in the workplace. Even when the mall was built, we thought it was going to solve many peopleâ€™s unemployment problems, but instead they hired people we have never seen before. I read newspapers every day because of staying at home, but those job opportunities are for people with degrees and sometimes require an absurd [amount of] experience so I donâ€™t even bother applying.â€ [dropcap]â€œ[/dropcap]It is very hard out here but we are trying. We are still depending on our families, and when you are unemployed, even the children donâ€™t respect you at all. I have a tourism qualification but it has proved useless to me. I read newspapers looking for jobs and I see all kinds of jobs, but only tourism-related jobs are not there. Once I did get an advert of tourism job but the problem was the experience – they were looking for someone with five yearsâ€™ experience in the field. Now I just look for any job that can pay my bills.â€

Dlamini says the #JobSeekersWednesday initiative is not yet as successful as heâ€™d like yet.

â€œHow I judge the success of the hashtag depends on a variety of things,â€ he says. â€œEven when one person says that they have applied for a job that they saw on #JobSeekersWednesday and they have been called for an interview. This, to me, is a success.â€ [dropcap]â€œ[/dropcap]The reason Iâ€™m unemployed is because there are no jobs in this country. I have applied so many times but with no luck of finding a job. I studied electrical engineering at college but then I dropped out because of money, but I am hoping to finish it off once I get a job and save money. Late last year, I applied for a job as a waitress online. I got an SMS stating that I have been accepted and I should call the given number. I called the number and they told me that the job is mine but I must first pay R2, 500 for registration and I just knew from then that it was a scam. I read newspapers but I hardly see job adverts.â€ [dropcap]â€œ[/dropcap]I think the reason I donâ€™t have a job is because I only have matric and nothing to back it up with. I do look for a job because I also want to further my studies and become a nurse. Sometimes I help my mother where she works as a domestic worker and get paid that small amount. I gave up on applying for jobs because it seems like by the time they tell us to apply, they already know who they are going to take. I only watch TV, I canâ€™t even afford to buy newspapers [for job vacancies] every day.â€

Itâ€™s the experiences of people like Menzi that spur Dlamini to expand what he does with #JobSeekersWednesday to more than just job postings.

â€œI do not only post job adverts, I go online and get advice from recruiters websites on how to write a CV and cover letters, then I post those things,â€ he says.

Do you have any questions about how you should structure your CV as a graduate or any other related questions? Ask using #JobSeekersQnA

“I hope many people will also start posting adverts to help the unemployed youth. We see many adverts every day so letâ€™s share it and make it easier for the youth to apply for jobs. Letâ€™s use social media for social change and I hope many businesses actually notice this hashtag,” says Dlamini.

Our recruitment specialist will be here until 15h00 to take your questions, keep them coming using #JobSeekersQnA [dropcap]â€œ[/dropcap]I have been looking for a job for over a year now but I cannot get anything stable. I used to work at a salon but it closed down. You never see a job advert looking for a hairdresser on a newspaper now have you? Truly speaking, I donâ€™t even read newspapers. I believe that if I want a job I have to approach the owner personally because this thing of applying – you get ignored for no reason. I last applied last year then I got tired of all the documents they need. Sometimes you get that you are missing two or three of those documents they need as requirements.â€

â€œI have heard quite a few people that got employed, last week I heard a guy who said he is starting a new job from a post he saw on #JobSeekers Wednesday,â€ he said.