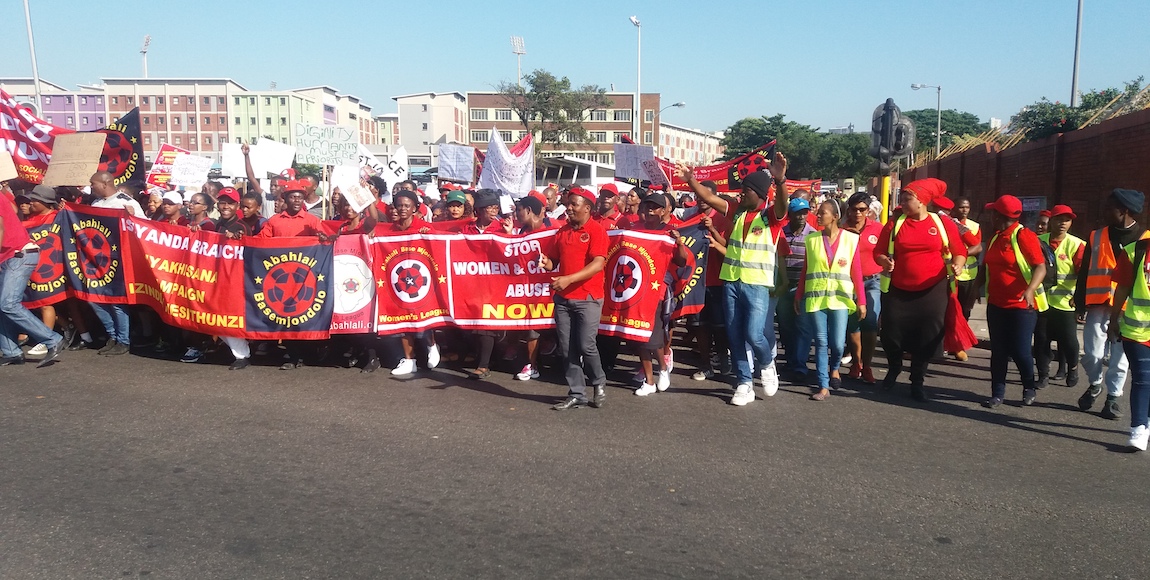 Thousands of people marched to the Durban City Hall on Monday against alleged violent evictions of shack dwellers in different informal settlements around Durban. The protestors, marching in solidarity with the shack-dwellersâ€™ movement Abahlali baseMjondolo (AbM) were joined byÂ the Right2Know campaign. The Daily Vox asked some of the marchers why they were there. Sphiwe Skhakhane, 31, unemployed, Cato Manor
I will not be bullied by the municipality or anyone else. I won’t let anyone evict me from my own land. The municipality does not own any land, nor does the government. This land belongs to our forefathers and that makes it ours and the future generationsâ€™. Some of us are unemployed and have families to shelter and feed, yet the police and municipal security guards keep on victimising us. We are tired and the mayor must be held accountable for our suffering; she promised us houses.

According to an AbM press statement released on June 14, there have been violent evictions in communities including Marianridge, Cato Manor andÂ eMansenseni this year. Residents have been injured, and a two-week-old baby died after clashes with police earlier this month. Mlungisi Mokoena, 18, unemployed, Cato Manor
People are being evicted without being given houses. We have tried and found our place to dwell but we have police coming in at night to victimise us. We are here to raise our grievances but it’s sad that the mayor won’t even show herself to us. It’s bothersome that when she needed votes she came to our shacks but now she can’t even come to receive our memorandum. We want the municipality to fulfill its promises to us. We also want the police to stop their brutality tactics against us.

The protestors intended to hand over a memorandum to city mayor Zandile Gumede and MEC of Cooperative Governance and Traditional Affairs but they were told both were unavailable. “Both the mayor and the MEC are not here and that shows how they regard us and the lack of dignity they have for our people,â€ said AbM spokesperson Thapelo Mohapi. Gugu Nene, 31, unemployed, Cato Manor
Police are torturing us; they beat us up and shoot at us. People are dying and we hold the mayor and the whole municipality accountable. Most people have lost their belongings and some endured injuries when evictions occurred on June 3. If the municipality won’t give us proper houses, they should at least give us jobs. We are young and unemployed, how are we to build proper houses if we have no jobs? The mayor needs to answer to us or people will continue dying. Phumlani Tshekele, 29, general worker, Cato Manor
My shack was burnt down with all my belongings and as a result; I have no identity document. Everything that I had was destroyed, including all my certificates. We are being evicted but we have nowhere else to go. We are not being defiant; if the municipality wants us to leave that place they must build us houses. We will not let them bully us without delivering everything we were promised. As shack dwellers we deserve some dignity. Zodwa Sigili, 31, unemployed, Cato Manor
During the June 3 evictions, I was shot three times with rubber bullets. I had to run away with my children and sleep in the forest. Our situation is dire, we have kids who go to school but nobody considers that. If we are being evicted like this, what will happen to our kids? We are being abused by municipal guards who don’t even negotiate with us. They just forcefully enter into our houses, beat us up and open fire right in front of our kids. There’s no civilisation among them and the municipality; they treat us like animals.