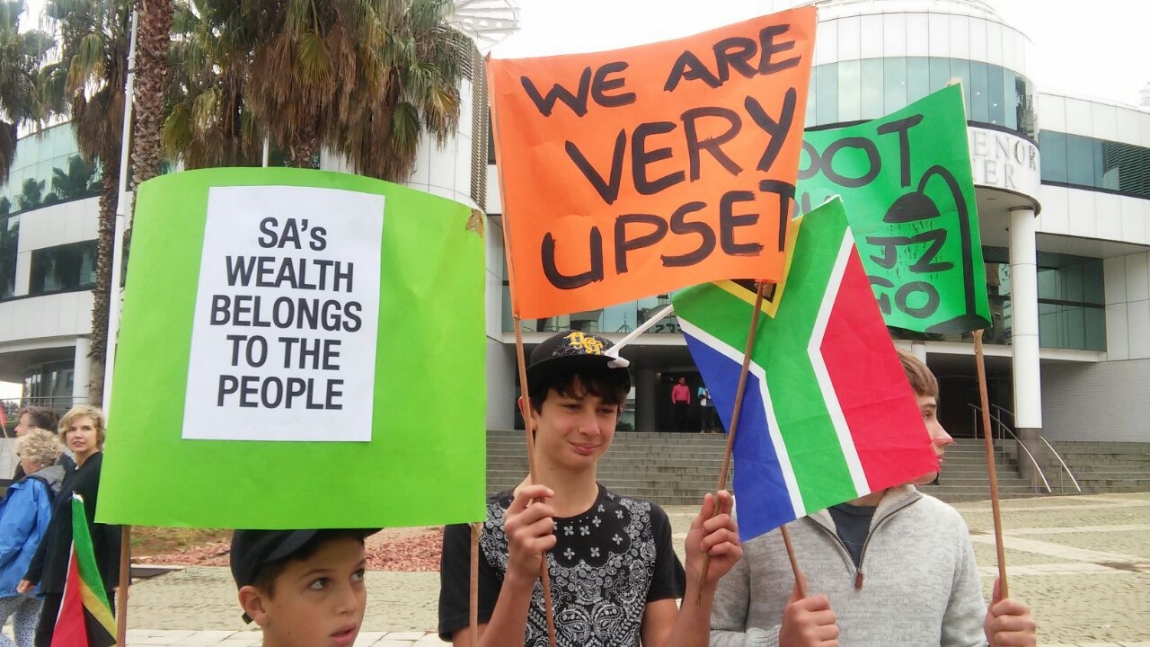 Mass action is expected ahead of plans to bring the country to a standstill on Friday 7 April. This comes after President Zumaâ€™s highly contentious cabinet reshuffle last week where he fired five ministers – including finance minister Pravin Gordhan – and switched a few more. Since then, South Africans have been seething and different groupings have planned action to force Zuma to step down.

Tensions are running high and the marches could turn violent after reports that 600 Umkhonto we Sizwe (MK) members have flown up from Durban vowing to defend ANC headquarters, Luthuli House from â€œenemy forcesâ€. Provincial chairperson of the MK, Themba Mavundla, had not confirmed whether the members would be armed, and said they would lay down their lives to protect the ANC and its president.

There are four protests planned in Gauteng today, two of which are expected to draw major crowds.

Save South Africa and Outa have organised a march in Pretoria, called the â€˜Peopleâ€™s Marchâ€™. The group is expected to march from Church Square to the Union Buildings.The march is scheduled to begin at 12pm.

There was some contention around the â€˜Peopleâ€™s Marchâ€™, as it initially did not receive permission to march from the Tshwane Metro Police. But on Thursday night, Pretoriaâ€™s chief magistrate overturned the original decision to disallow the march. The South African Communist Party (SACP) and the Workers and Socialist Party (WASP) are also joining the march.

The SACP have confirmed that some of its party officials and members will join Save SA in their march on the Union Buildings. The SACP was supposed to march on Treasury, and then join the Peopleâ€™s March later but the city and Treasury hadnâ€™t granted them permission to march on its offices and hand over a memorandum.

WASP is marching for the independent working class organisation, under the banners of #OutsourcingMustFall and #FeesMustFall.

Mayor of Tshwane, the Democratic Alliance’s (DA) Solly Msimanga also took to Twitter to clarify that the city had not disallowed the march and that â€˜someoneâ€™ was â€˜playing politicsâ€™.

We haven't denied permission for tomorrow's march. Someone who's ill-disciplined is busy playing politics using their admin position.

In Johannesburg, the DA has organised a March that is expected to depart from Westgate Transport Hub and head to the Mary Fitzgerald Square at 10am.

"We welcome all who wish to join us & we will not intimidate any South African who is unable to join us." – @MmusiMaimane #MarchforChange pic.twitter.com/6lNtR4vhf0

Tomorrow SAns will take to the streets to raise their voices against the ANC, Zuma & their mismanagement of the country. @jsteenhuisen pic.twitter.com/xO73B9o4hu

There is also another march in Edenvale organised by Edenvale Save our Country South Africa, from Horwoods Farm starting at 9am.

Members of the public have organised a meditation and walk in Saxonwold. The protests are expected to gather at the EQ Centre, at 4 Ashwold Road from 12pm to 14pm.