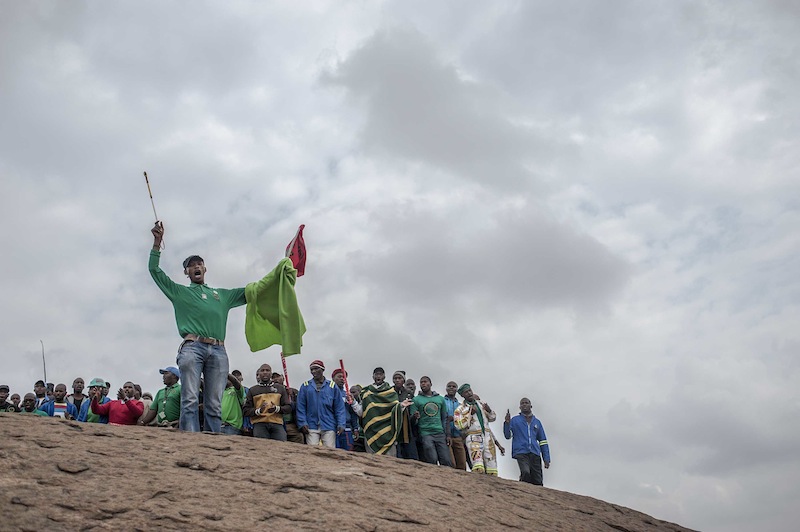 On Saturday, thousands of people gathered at the koppie in Marikana where, on 16 August 2012, South African police opened fire on a group of striking platinum miners, injuring over a hundred miners and killing 34.

Most of those present at the commemoration were miners from the mining union AMCU, which was at the forefront of the strike that culminated in the shooting. Miners sayÂ they are still poorly paid and continue to work in dangerous conditions, and thatÂ they intend to continue the fight for a living wage and for improved living conditions.Â They place the blame for the Marikana massacre squarely at the feet of the ANC. For the second year running, there were no representatives from the ruling ANC or any of its allies. Thousands gather at the koppie for the second anniversary commemoration of the Marikana massacre. They came to remember their fallen comrades, friends, brothers, husbands and sons. Mine workers climbed to the top of the koppieÂ and sang songs mocking the police and the mining company for their roles in the killing of their colleagues. Many feel the miners’ sacrifice has been forgotten. Mine workers lift their hands in a salute when the leader of the mining union AMCU arrives. A man holds a green blanket aloft in recognition of strike leader Mgcineni â€œMambushâ€ Noki, who became knownÂ as “the man in the green blanket“, one of the first miners to die in the massacre. Widows of the Marikana minersÂ hold candles during the commemoration. A woman sheds tears asÂ the names of the dead miners is read out. SheÂ mourns her husband, killed by the South African police during the shooting. A woman says a prayer for the deceased. Families of the deceased still haveÂ unanswered questions about what happened two years ago.