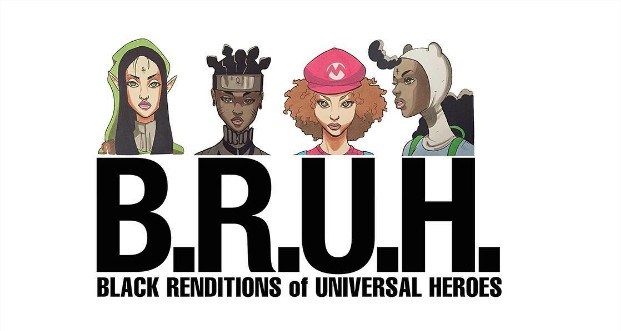 If youâ€™re an avid reader of comics then youâ€™ll know that they arenâ€™t always the most diverse in their character representations. While this has changed over the years – as we are seeing more characters of different races, genders and sexuality – most characters are still white males. But one artist, Markus Prime, is trying to bring in more diversity through his reimaginingâ€™s of superheroes. DANA DA SILVA rounds up.

Artist Markus Prime rose to Instagram fameÂ for his gender- and race-swapping creations of pop culture and superhero characters. These quirky and sassy characters range from The Powerpuff Girls and Dragon Ball Z to Ash Ketchum and Superman. His sketchbook, named B.R.U.H (Black Renditions of Universal Heroes) is a collection of these works, which he self-published.

The most important part of his book and projects is to communicate the importance of representation. For kids to be able to see characters that they have grown up idolising who they can also identify with. Prime has been drawing these characters for the past year, over time the demand for them grew and grew. Especially for his character Froku, a black female version of Dragon Ball Zâ€™s Goku.

â€œI really took a liking to her and people began to really appreciate my version of her. It wasn’t just about her being black, it was more about the idea that she could’ve been a real [character],â€he said in an interview with The Fader. This is what led him to immortalise his creations in a sketchbook.

He wanted to get across to kids that itâ€™s okay to draw characters who look like them. â€œI want children of colour throughout the world to be inspired by this book and start creating things that they can identify with,â€ he said to The Huffington Post.

We know that comic fans are incredibly diverse in their age, gender, race and sexuality (to name a few). So it’s about time this is reflected in the comics they love. And maybe it’s time for movie production houses to sit up and take notice too.