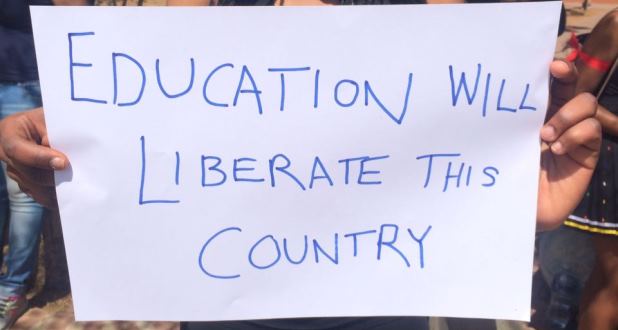 Wits postgraduate student, Masutane Modjadji says that, as much as we acknowledge that South Africa is a very unequalÂ country, we are unwilling to try and make the sacrifices to try to even out society. There is potential for this kind of work to start at universities.

As the voices of those displeased with the Fees Must Fall movement grow louder, a study I read about salary disparities in South Africa keeps coming to mind. In fact, theÂ findings by earnings analytic consultancy Analytico come to mind each time I read an analysis that supposedly sums up why the students who are calling for free education just â€œdon’t get itâ€. What bothers me is that those who do “get it” appear to fit into the brackets of better-salaried citizens, giving further credence to the belief that poor people’s cries are worthless. This is a principle that must be rejected.

As I write this piece, another equally disheartening study is pending, this time by Finscope South Africa, which aims to show the comparative spending on education by South Africans from different backgrounds. Already, the company has indicated that on average black South Africans spend more of their income on education that any other race in the country (7% vs an average of 4.3% for other groups).

Students are well aware of how workplace wage politics affects their lives, threatens their education and changes their paths in life. Those who are not on bursary schemes rely on the already stretched financial resources of their family members to fund and maintain their tertiary education. Your tertiary institution hopes and dreams are damned if you are one of those who comes from a household where not a single member is employed.

Once accepted at university, most students who are not eligible for bursaries will tell you that the task of maintaining your place at university grows more difficult each year, until you complete your studies.

Despite institutions giving verbal commitments to transformation, they still struggle to shed the elitist culture that leaves students from poor and working class at a disadvantage.

Observers who are too far removed from the students to hear their issues for themselves, have been quick to label the anti-fee protesters as entitled brats who don’t know what they are fighting for. Others have gone as far as to suggest that if fees are dropped, the condition has to be a mandatory 75% pass mark. My condition would be to make sure that students coming into our institutions all get the same quality education and access to educational tools.

All the anti-Fees Must Fall noise has left me to conclude that as much as we are quick to acknowledge that South Africa is a very unequal country, we are not willing to make sacrifices that would try to even out schools, playgrounds, workplaces and tertiary institutions. Hard as it is, there is potential for this kind of work to start at universities.

Blade Nzimande’s offer does not inspire confidence because, apart from it being 22 years too late, government has not taken students into their confidence and laid out any plans of how we could work our way towards free education.

If there is a lesson to be learned from the Fees Must Fall movement, it is that things will not get better with the next generations of students if fees continue to increase while nothing else changes. Government and corporate South Africa must not ignore the Finscope South Africa study when it is released in early November.

The Fees Must Fall movement shows that the pressure that used to be carried by parents solely is now spilling over onto students, causing frustrations over any prospects of breaking out of the cycle of financial struggles.

Parents and specifically black women, who the Analytico study shows earn the least among all South Africans, carry the greatest burden. Education should not have to be a privilege reserved for those who can afford it. But right now it is, and this is not working for students.

Masutane Modjadji is currently a postgraduate student in the Journalism Department and visiting researcher at Wits University in Braamfontein. This opinion was written in her personal capacity and also appears on her blog.