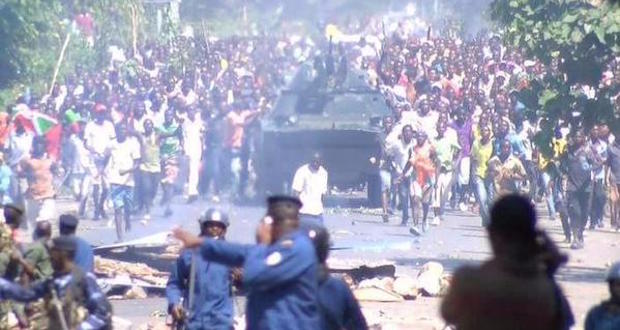 Reports that a private radio station and independent television station have been attacked in Bujumbura, Burundi, haveÂ led toÂ fears that an all-out war might break out in the East African country.

Supporters of Burundian President Pierre Nkurunziza launched the attacks on Thursday, less than 24 hours after the army led an attempted coup in the capital.

Witnesses say that the African Public Radio (RPA) station was hit by a rocket, which set the building ablaze. In the two weeks of protests that have rocked the country following the presidentâ€™s plans to stand for a third term, RPA was put out of service, only to recommence broadcast after the coup was launched.

Burundiâ€™s army led the coup, with Major General Godefroid Niyombareh taking charge. Nkurunziza was out of the country when the attempted coup took place on Wednesday, attending an East African Community meeting in Dar es Salaam. In Nkurunzizaâ€™s absence, the army announced on radio that the coup had been a success.

â€œThe masses have decided to take into their own hands the destiny of the nation to remedy this unconstitutional environment into which Burundi has been plunged,â€ Niyombareh said in a statement. â€œPresident Pierre Nkurunziza has been relieved of his duties. The government is overthrown.â€

The president is currently hidden away in Tanzania, while his loyalists have been attacking broadcast channels in the capital. Innocent Muhozi, who owns an independent TV station in Burundi, told media that pro-Nkurunziza forces and the ruling youth party are responsible for the attacks.

The East African Community will be wondering how the AU is going to react to the crisis. The stalemate is a political one, involving political parties and actors,Â but there are still major ethnic fault lines in Burundi, which hasÂ significant Hutu and Tutsi ethnic divisions. If the crisis is not resolved amicably and soon, Burundi’s crisis couldÂ becom a larger issue for the region.

Heavy gunfire and explosions are still to be heardÂ through the capital as the army and Nkurunzizaâ€™s supporters continue the fighting. In the midst of it all, itâ€™s still unclear who exactly is leading the country.