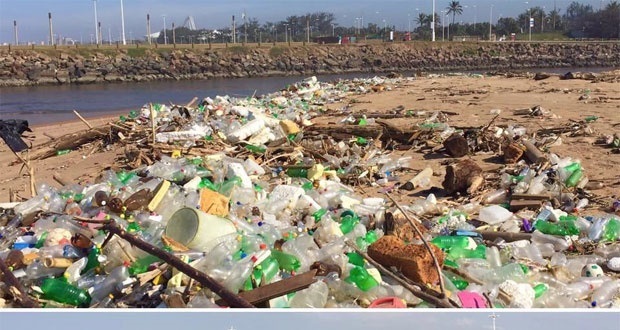 LUC QUEVAUVILLIERS and DALE JOHNSON have taken it upon themselves to keep Durban’s Blue Lagoon beach clean. They, with the help of a growing number of friends, have volunteered to clean the beach, for free, at least once a month since March 2016. They are happy with their progress so far, but are always seeking more help from others. They have formed a Facebook group called #CleanBlueLagoon and they are overwhelmed with its growth. Qiniso Mbili spoke to them about their initiative. We started cleaning up this beach because no one was doing it and we knew it had to be done. People, including us, had been complaining about the waste on the beach until we realised that complaining was not going to help with anything; we could either complain or just clean it ourselves.

On our first cleanup we had only ten people and then people started getting interested and they joined us. On our last cleanup there were up to 80 people. Peopleâ€™s reception of this initiative has been great; they tell us itâ€™s amazing. This is why we have managed to grow into such a big group; we never expected such momentum.

This is not only about keeping the beach clean but it is also about making awareness. The more people we can get on our team, the more they get to really see how serious this is and they can inform others. This is also about the sea life; it is terrible to see a bird with a piece of plastic tied up on its neck. We are always amazed to see people rush to fish at such an untidy place, they donâ€™t realise that if they could help us clean then there would be more fish for them to catch later on.

This also helps give awareness about a much bigger problem in South Africa, which is housing. Most of the waste that ends up on the beach comes from the river. It is in this river that people from the informal settlements, up the river, dump their waste and they have no choice as they do not have proper waste collection systems.

When the medical waste washed up on some of the Durban beaches two weeks ago, we saw it as a blessing in disguise because only then the municipality started getting involved in cleaning the beaches. The beach that we clean is relatively harder to access and we think that is why the municipality fails to go and clean there.

We donâ€™t plan on formalising what we do; we want to keep things simple. We want people to join us easily without complications.

We are very proud of what we do and it feels great to be able to make a difference. This is just one of a few things that one can actually have control over. We plan to do this as long as necessary. We have created a Facebook group to reach out to all others that are interested in helping. Our aim is to expand so that we can clean a wider span of the beach than we do right now.

One last thing – we hate polystyrene!