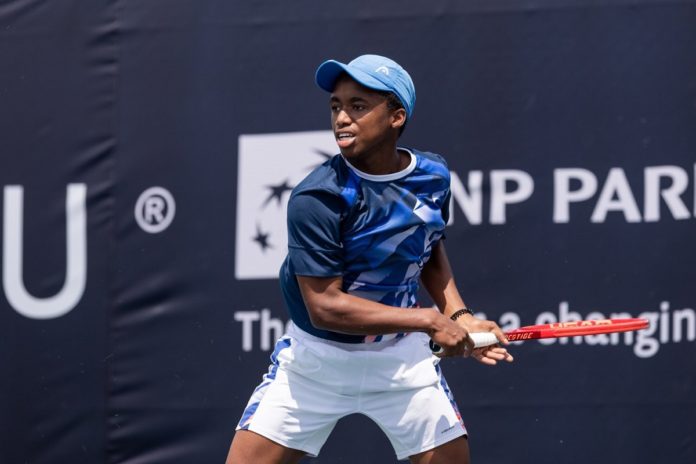 At 17, Kholowam “Kholo” Montsi is a rising star in the tennis world. He won his first match at the French Open Junior this weekend and has a busy schedule of matches ahead of him. Montsi is  proving himself as one of the best young tennis players in the world. Here’s what you need to know about him as he takes on the world in Paris.

UPDATE: Montsi unfortunately was knocked out of both his singles and doubles matches. But we’re sure he is going to come back even stronger.

He’s not the only tennis player in his family

While Montsi has played with some of the best players in the world, he counts his older brother, Siphosothando as his main inspiration. Watching the elder Montsi play inspired him to pick up a raquet. Montsi told The Guardian that both he and his brother disregarded the label of “development” players: “We’re here for a reason and we’re doing what we’re doing for a reason. We’re also representing other black players and we’re not alone. So playing with the support of black people is actually a really special thing.”

When Montsi stepped onto the court on October 4 to play his first game at the French Open Junior, he was making history. He became the first black South African junior player at the tournament in 20 years. Peter-Jon Nomdo, now his coach, last played in the tournament in 2000. Montshi wasn’t even born at the time but he’s already suffered the stigma of the words “quota player” and “development player”.

He’s been playing since he was a kid

Starting from the age of seven, he played tennis at primary school. At first he played it as an extramural activity as he enjoyed playing rugby as well. However, because he looked up to his brother, he decided to quit rugby and karate to focus on tennis. Speaking to iol, he said: “I would see my brother playing tennis and when he started going to other countries to play I figured if I wanted to be close to him I would have to play tennis as well. It generally started because I wanted to go to Asia with my brother and so I quit karate and joined him.”

Montsi went into the French Open Junior as the highest ranking South African and African junior player. In March, he won the African Junior Championship and rose to number 12 in the International Tennis Federation junior rankings. Regardless of what happens in the rest of the tournament, his star is only going to rise. “I would love to win the French Open, I’m a big fan of clay courts, you get more time to play. It is better for me at my height,” he said.

He wants to inspire others

Being the “first” in anything comes with a lot of pressure but Montsi revels in it. He wants to inspire other young, black South Africans to take up tennis as a sport. Montsi told Forbes Africa: “I want to lift up tennis as a black boy. We do not see tennis as a big sport in South Africa, barely any black kids play. I don’t want to put pressure on myself, but I do feel a responsibility to help black tennis players get opportunities.

He and Eliakim Coulibaly are making African tennis history

While his brother might no longer be playing, Montsi has a new friend. Eliakim Coulibaly is an 18-year-old Ivorian tennis player. The pair are close friends and rivals. In 2020, they became the first African players in history to be in the junior top 20 rankings simultaneously. Four years ago, the pair dreamed of playing doubles together at grand slam tournaments.

“Now we look and we’re like: ‘Dude, do you realise we’re top 20? […] Back then, we weren’t even top 200. I always told him that we should just believe. It’s one of the biggest things that we have,” said Montsi.

The pair have achieved part of their dream as they’ll be taking to the court as doubles partners at the French Junior Open. Now all they need to do is win.