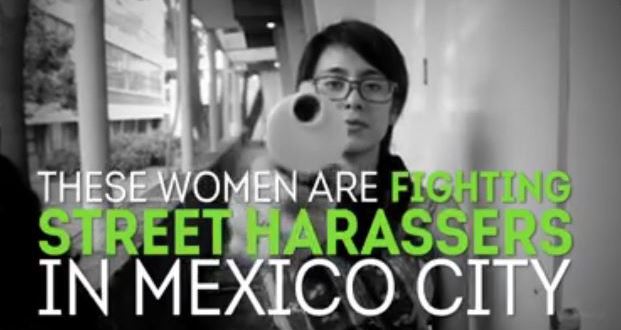 A group of Mexican women have found a novel, creative way to deal with street harassment – they shoot offenders with colourful confetti and blast punk music in their ears. AAISHA DADI PATEL rounds up.

The ladies of Las Hijas de Violencia (‘The daughters of violence’) are dealing with harassment as soon as it happens as a means of therapy. “We recommend that you have fun with it so that you’re not left feeling violated from what happened, and you’re able to move on and still have a great day,” say the trio.

“When someone harasses us in any way, we run after this person, grab our confetti guns, shoot once, turn on the speakers and sing Sexista Punk [a punk rock song].”

Technologically connected women are less tolerant of harassment than their mothers, said Fabian Sanabria, an anthropologist at the National University of Colombia, told Costa Rican publication The Tico Times. â€œCatcalls are a typically sexist and Latin American form of flirting,â€ said Sanabria.