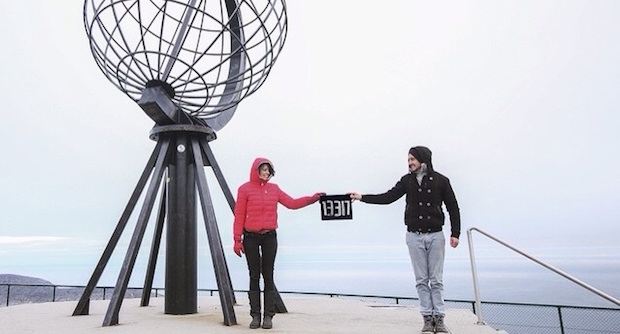 Inspired by a Design IndabaÂ talk, aÂ young South African couple decided to quit their jobs, sold their belongings, and set off for a grand adventure across the globeÂ and thanks to social media they’re taking everyone along for the ride. AAISHA DADI PATEL caught up Chanel Cartell, one half of the blogging/Instagramming team How Far From Home to find out how they managed to do it.

Armed with a camera, a blackboard and some chalk, Chanel and her boyfriendÂ Steve Dirnberger document the stops along their journey with envy-inducing shots of the gorgeous locales they’ve travelled to.Â AÂ chalkboard held up in each picture, showing how many kilometres away from Johannesburg they are, adds a twist to the usual travel snaps.

It all began in Johannesburg – 0km away from home:

0km // Johannesburg // South Africa Hello @Instagram. Over the next year, we (@ChanelCartell & @StevoDirnberger) will be travelling #rtw in search of inspiration to fuel our creativity. Our goal? To venture as far away from home as we can. Weâ€™re looking at a journey that allows us to live outside of the shuddering comfort zone. Follow our story >> link to blog in profile. #HFFH_home

“We left Johannesburg on 2 March 2015 – in 2014, we watched a talk by Stefan Sagmeister about the power of taking time off and were inspired to say ‘Yes!’ to our own dream of traveling around the world whilst creating artwork along the way. So one year after the talk, that’s what we did,” Chanel told The Daily Vox.

Packing up all of their things and quitting their day jobs wasn’t the easiest thing to just do, but through planning and each other’s support, it became bearable, she said.

“It took about six months of planning (itineraries, flights, selling of belongings), and a full year of rigorous saving. As we both really loved our jobs, resigning was really difficult, but we knew it was just something we had to do,” says Chanel.

Here they are, cycling around Austria, a mere 8,339km away from home:

8339km // Seekirchen am Wallersee // Austria Cycling around the Lake, is just one of the many things to do outside of #Salzburg. Drinking local Austrian beer is also up there. Follow our story >> link to blog in profile. #HFFH_travels

But how on earth have they been ableÂ to fund this crazy adventure, particularly given the appalling state of the rand?

Chanel says that Stefan’s Design IndabaÂ talk inspired her to become an “expert saver”, and that Steve had alsoÂ been saving for about five years before they set off on their trip.

“We became very strict with our disposable income, always keeping the end goal in mind. Selling our belongings also brought in some extra spending money, so we were lucky. During our travels we’re on a very strict budget, and stay with family and friends when we can,” she says.

Certain apps and websites have also made life so much easier for the couple. They use WorkawayÂ – a system where you volunteer in exchange for food and accommodation – to save on expenses, and Airbnb, Hotels.com and Hostelworld to findÂ good deals on paidÂ accommodation.

Here they are jumping around Berlin, 10,025km from home:

The payoff has been a host of travel adventures and memories to treasure for life. ChanelÂ narrows her top moments down to these:

This is them, in the largest tunnel in the world, in Norway,Â 15,868km from home:

15 868km // LÃ¦rdal // Norway This is what the longest road-tunnel in the world looks like when you get to the halfway point. At a whopping 24.5km long, the LÃ¦rdal Tunnel had us, quite literally, stopping in our tracks. Follow our story >> link to blog in profile. #HFFH_travels #DITakeOver #HFFH_takesover

For now, they still have a lot of adventuring that they want to do. (You can even check out their ‘Wanderlist‘ to see what they have in mind.)Â But in the next few weeks, the pair plan on visiting Halstatt in Austria, sailing the Greek isles and learning to make gelato in Italy.

“What we’ve learned so far this year, is that it’s sometimes better not to have a plan and leave some things unknown,” says Chanel.

Chanel says that for now, it looks like their budget will take them through until the end of the year. “After that, only time will tell!” she says.

Keep up with Chanel and Steve’s adventures throughÂ their blogÂ or their Instagram page.