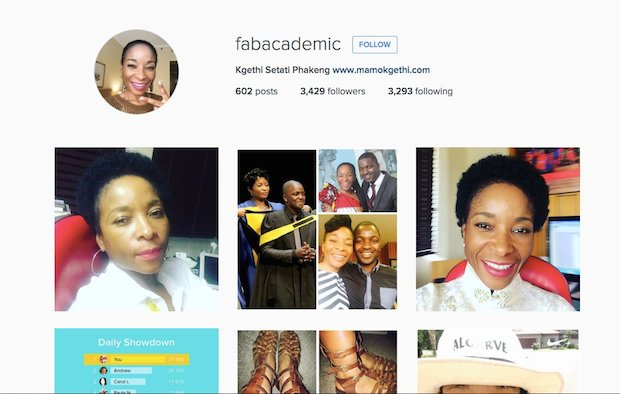 Professor Mamogkethi Setati Phakeng, aka @FabAcademic on Instagram is the latest addition to UCTâ€™s executive. AAISHA DADI PATEL rounds up a bit more about the woman who proves that you donâ€™t have to be a man in a grey suit to be an academic.

Outgoing Vice-Principal of Research and Admission at UNISA, Prof Phakeng is a busybody. She has a doctorate degree in Mathematics Education from Wits, and in 2013 was made an honorary professor. She is the current President of Convocation of Wits University in her capacity as an alumna, so she’s present for every graduation ceremony â€“ and is trustee of the FirstRand Foundation. Sheâ€™s always got a lot to do â€“ all while keeping her lipstick to match and her selfie game on point.

On Thursday she announced via Instagram that on 1 July 2016, she will officially take up her post as the new Deputy Vice Chancellor: Research and Internationalisation at the University of Cape Town.

Today is my first day at work in 2016. This, is indeed a year of change and new beginnings. While I cannot foretell what the year will bring, I know for sure that three things will happen: 1. On 30th June I will say a good bye to Unisa. I started here on 2nd January 2008 after an amazing 11 years of phenomenal growth as an academic at Wits University (my home). I have had an interesting time at Unisa â€“ I learned much, served many and made lots of good friends. I will always cherish the time I had at Unisa. In the few months I still have here I will have special moments to say goodbye to friends and colleagues. I will occasionally also share my beautiful Unisa journey on this timeline as my #TBT. 2. On 1st July I will say hello to UCT and begin another journey, this time in a different province with the mountain and the sea. I look forward to joining the executive team of UCT as Deputy Vice Chancellor: Research and Internationalisation and experience the challenges and opportunities that come with that territory. I am very aware that one of the things I am going to have to deal with is being different. I have a feeling that I am little too loud, perhaps too colourful and passionate for the seemingly calm UCT environment. Well, perhaps that is the effect that the amazing Table Mountain and the very cold Atlantic Ocean have on people. Dealing with difference or with being different is one of the most complex things in human relations. I look forward to another opportunity for me to learn and grow. 3. On 1st November I will proudly turn half a century. I have no idea how it will feel like because at this point in time I don’t feel like a grownup. When I look in the mirror I see a gorgeous mature woman with stunning biceps and cheekbones. Some people treat me like an adult and I am expected to act like an adult and make reasonable decisions and most of the time I do. But the truth is that a piece of that insecure, very shy teenager I used to be is still very alive inside me. I don’t know when I will feel like I am really a grownup. Perhaps never, and that’s okay. At the moment I am enjoying being 49. Life has consistently brought me surprises – so far so good.

Prof Phakeng may have a lot of responsibilities â€“ but she swears by sticking it out in the gym to help her keep everything in check, and is a huge fitness junkie.

She loves travel, and her line of work takes her to conferences all around the world. She doesnâ€™t let work get in the way of her exploring and experiencing the best of wherever she is though â€“ here she is in Haiti, and in freezing cold Finland.

A beautiful Caribbean picture. Yes today we went to the beach – Haiti is an island after all. #Blessed #Grateful #RevengeOfABoringChick

Freezing in Finland. I will be very prepared for our not so cold winter when I get back home ?

And while making sure she always looks her best, she also makes sure that she supports local talent â€“ and encourages others to do the same.

Today I went to Centurion mall to do some errands. In the process I popped to the MAC counter at Edgars to exchange my six empties for a free lipstick. I was wearing these shoes which my brother Jeff made for me in 1995, yes 23 years ago, before gladiator shoes were in fashion. He was ahead of time, always is! The women at the MAC counter were so excited about the shoes asking where I got them blah blah. So I told them that, “Ko gae ra di etsa” ? Hahahaha cheeky, I know! So I realised that I haven’t told you about this brother of mine who does amazing leather works. Handbags, shoes, belts, upholstery, etc. He is brilliant. One day I will show you another pair of gladiator shoes that he also did for me that many years ago. In the meantime you can get hold of him at +27 (73) 6766894. Let’s support black South African creative talent. #buyblack #buyafrican

Today am wearing these earrings given to me by one of the Wits students at the ZCC student corporate dinner a few weeks ago. I cannot remember her name and I hope one of the students will tell me who she is because she makes these earrings herself. I need to tell everyone about them because these earrings are not only colorfully beautiful but they are also very light and so kind to your ears. And yes they scream ‘AFRICA’ from afar! They give character to an outfit. Thank you girl! I love the earrings and will come for other colors before end of the year. Let’s support our young creative people! #IAmAnAfrican #BuyLocal #SupportAfricanDesigners

She loves to keep it real with young people, and always posts motivational messages alongside selfies with some of them â€“ she was even one of the academics who gave Mcebo Dlamini a big embrace on stage at his graduation last year.

We love when we come across people who shatter stereotypes â€“ and the passionate Prof Phakeng, who seems to exude excellence in all that she does, excites us with her colourful approach to life. To put things into mathematical terms: she is proof that being fabulous and being an academic are not mutually exclusive.