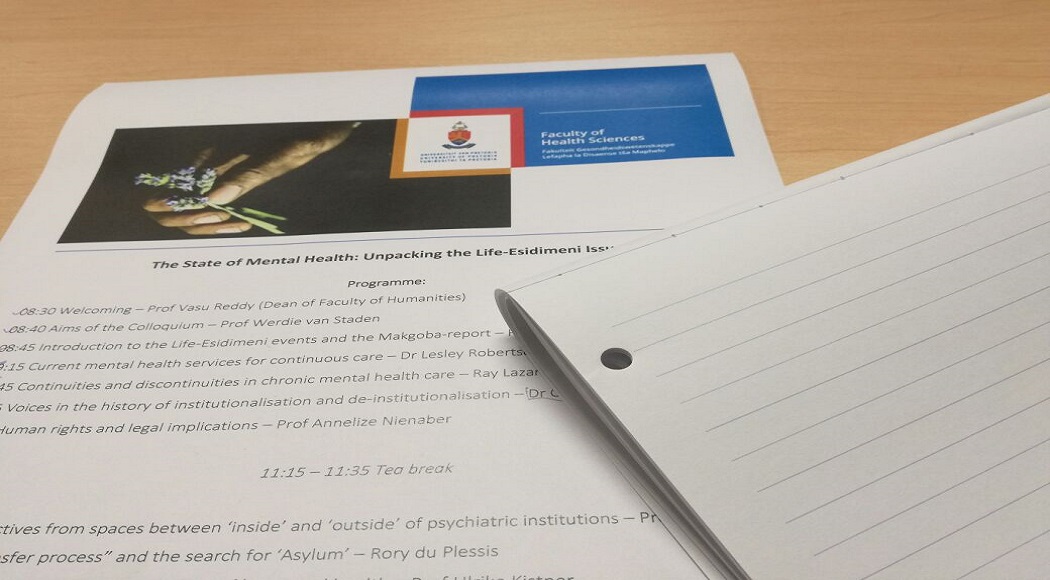 We’re at UP for the State of #MentalHealth Colloquium unpacking issues from the #LifeEsidimeni tragedy.

The colloquium follows the horror of the Life Esidimeni tragedy which exposed that mental healthcare in the country is in tatters. A hundred and counting of the 2 000-odd people who had been receiving chronic psychiatric care died from neglect when they were transferred from Life Esidimeni mental health facilities to their families, NGOs and psychiatric hospitals.

Now-former MEC for Health in Gauteng, Qedani Mahlangu, terminated the contract between the Department of Health and the Life Esidimeni mental health facilities.

Several academics presented reports on aspects surrounding mental healthcare.
Besides theÂ Makgoba report, the presentations discussed the state of the current mental healthcare system, the history of Life Esidimeni, private mental healthcare, the process of transference and the lack of dignity afforded to the most vulnerable in society.

Prof Vasu Reddy: the events leading up to the deaths tell a story, we will look at history of #LifeEsidimeni, the current context & future.

The purpose of the colloquium was constructive. It was not an opportunity to lament the failings of government, but to allow for critical thinking, new information and creative insight into the tragedy and to gain solutions.

The tragedy also highlights the shocking discrepancies between policies and praxis, Reddy said.

Prof Vasu Reddy: there is a perception that #MentalHealth patients don’t have rights. Perhaps that’s why they had been abandoned.

The colloquium highlighted the need for local solutions to local problems. Academics are concerned that the policies currently in place are not tailored for the South African context and are imported from other countries.

Some of the key findings in the reports revealed that there has been little improvement in mental healthcare generally.

Dr Ngcube: Historically, SA #MentalHealth has never been one of steady and linear progress.

Another report revealed how race played an important role in the type of care afforded to patients. Rory du Plessis, a lecturer from the visual art department at UP, said black mental healthcare patients have had a history of receiving worse care. Du Plessis said black patients worldwide are more likely to be imprisoned than admitted to mental healthcare facilities when they display signs of ill mental health.

In South Africa, historically, black patients were more likely to be transferred between institutions – which is often dangerous and is ill-advised – and given poor care.

The numbers tell a story of neglect, and of the lesser dignity afforded to the voiceless. From government mental healthcare facilities costing close to R2000 per patient, per day, the money allocated to Esidimeni patients fell to R320 to cut costs. However, the health department had only budgeted only R112 per patient, per day for patients in NGOs, noted Professor Ulrike Kistner of the UP Philosophy department.

Prof Kistner: There is less value (monetary and societal) in the lives of the vulnerable. #LifeEsidimeni

More issues were raised than solutions posed, and the colloquium ended on an optimistic note, with calls for scholars to continue the conversation about the tragedy and to continue to look for solutions using the academic network.

Concluding remarks: How can we ensure that the voices of the voiceless can be heard? #LifeEsidimeni