Home As Told to This young writer has written a book of IsiZulu poetry but he’s...
WhatsApp
Facebook
Twitter
Email
Print 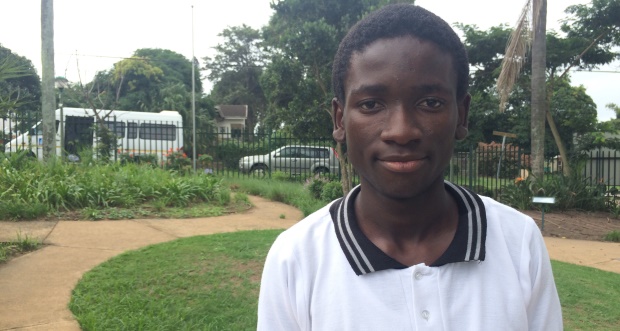 Grade 11 pupil, MENZI MTHETHWA has written a book of IsiZulu poetry, but he’s struggling to realise his dream of being published.

It’s unfortunate that I didn’t have the privilege of growing up under my parents’ care. My mother died when I was a year old and well, you know the story about disappearing black fathers. Years later, I met him just before he passed away. My grandmother looks after me and I’m grateful.

Gcina Mhlope’s books have given me life. There’s one book where she writes about changes and challenges in her life and her journey on how she become a storyteller. That book saved me; it encouraged me and made me believe that I can also overcome hardships and challenges. Even though she’s a woman, I could still relate.

I have a gift of writing. I started writing songs for a music group I was singing with in my hometown. The other musicians in the group told me my writing was too powerful for songs and encouraged me to write poems. That’s when I began to write poems and after some time, I got into writing scripts for radio drama and songs for other people.

I’m crazy about poetry, hence the nickname Crazy Poet. I always have a pen and paper with me, jotting down a line of a new poem or working on an old one. My friends and other people in the neighbourhood constantly tell me that these poems will drive me crazy. But it’s that “craziness” that resulted in me completing my first book; a compilation of IsiZulu poetry that I’ve written. It’s ready to be published but I’m struggling to make sure that happens.

I gave my book to a well-known author at a gathering in Pietermaritzburg last year and he promised to help me get published. I haven’t heard anything from him since that day. I’m not exactly sure what happened, maybe the copy I gave him got lost or he couldn’t help me.

The door to my dream of being published seems distant and closed because everywhere I go, I’m referred to another people who will refer me to the next. I don’t have the resources to continue following up with these references. That is probably one of the reasons I might not live to see my work published. I’ve spoken to tons of people, and right now, there’s a teacher that’s trying to help me out. He’s managed to connect me to someone who wants to publish a few of my poems and not the whole book.

My wish is for my poetry to be published worldwide. Maybe I’m pushing it by saying worldwide. I want my poems to be published and spread all over South Africa. It would really make me happy to see the creative arts uplifted in my community because we’re all so gifted and talented; we just need support and direction. He said he would update me on any progress and how my poems will be used in his book. His putting together a collection of Zulu poems from different writers.

Our problem as black people is that we don’t like to read. We always want things to come to us and we hardly make attempts to reach for the things that we want. Our habit of not seeking information is a challenge. If you ask many of my classmates who Chief Albert Luthuli is, they wouldn’t be able to tell you. It’s important that black people read and know about our history. It’s also important that young writers write, especially for the next generation.

I hope one day, I and many other young aspiring writers will see their works all over, and most importantly, that the poems and stories we write will be read by the next generation of writers.