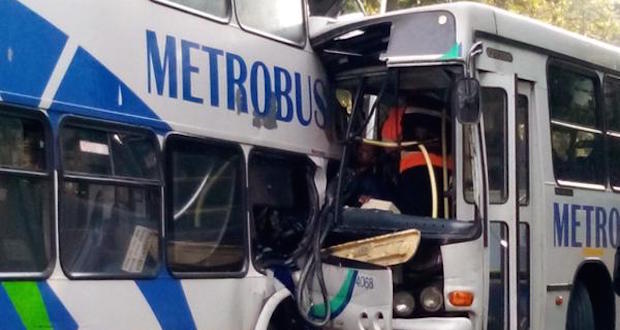 Questions about the safety record of Johannesburgâ€™s Metrobus service have been raised again following a a head-on collision between two buses on Jan Smuts Avenue in Saxonwold early on Friday morning.

Video footage from the scene shows a single-deck bus partially embedded in a double-decker bus on the opposite side of the road.

Eyewitnesses described the scene as â€œhorrifyingâ€.

â€œWhen I got here there were screams, people crying all over. Some paramedics are still trying to administer help to other people in the bus. Others are being escorted out and I can see just a couple of bodies. It is not look good at all,â€ caller Mopha told Radio 702â€™s John Robbie.

Ward councillor Tim de Jager told Robbie that it appeared the bus travelling south might have been speeding and hit the barrier before hitting the double-decker bus.

Firemen and EMS vehicles are on the scene. At least 65 people are believed to have been injured. One of the drivers died on the scene and, according to the Citizen, the woman De Jager referred to, who was six months pregnant, died after being taken to hospital.

In recent months, questions have been asked about driver competency and the maintenance of trucks and buses on SA roads.Â The Road Traffic Management Corporation has reported that aboutÂ half a million heavy-duty truck and bus drivers operate on SAÂ roads with invalidÂ driving permits and thatÂ almost half of all employed bus and truck drivers do not having the correct training or certification.