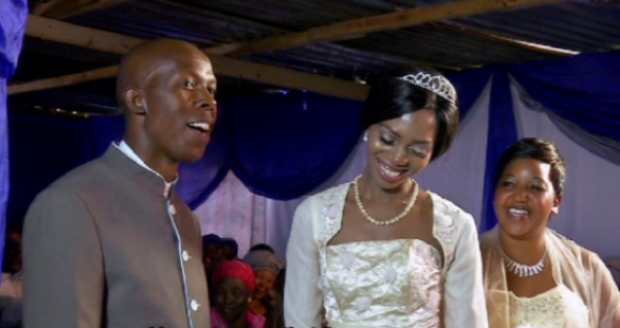 Sunday’s episode of Our Perfect WeddingÂ showcasedÂ a relationship that began as statutory rape, showing not onlyÂ how normalised rape culture is in South Africa, but also how middle-classness gets in the way of talking about real life issues. PONTSHO PILANE explains why.

Just two minutes into Sundayâ€™s episode of Our Perfect Wedding, I tweeted â€œAnother statutory rape wedding,â€ because the groom, Fanie, was 28 years old whenÂ he first pursued a relationship with his now-wife, Bavelile – who was then just 14 years old.

Mzansi Magic has defended the episode and said in aÂ statement that â€œthe premise of the show is to celebrate the love and the journey that the couples take leading up to their wedding dayâ€. I watched and live-tweeted through the episode and like many others I was floored and angered by the outright showcase of rape culture.

I must confess, I love watching Mzansi Magicâ€™s Our Perfect Wedding (OPW). For months, I’ve been scribbling ideas for an article onÂ how refreshing the content on Mzansi Magic is, from OPW to Hot Plate, a reality show that showcases talented chefs from the township. But I have also had to confront the snobbery withÂ which I watch these shows.

For me, there is something deeply problematic with black peopleâ€™s preoccupation with the cultural import that is a white wedding and the desire ofÂ many to see themselves partake in what is considered by many to be theÂ quintessential symbol of aÂ union withÂ someone they love deeply and vow to spend the rest of their lives with.

Also problematic is the divide between how middle class and working class South Africans view the programme.

As columnist Milisuthando BongelaÂ writes, â€œUnfortunately, for many middle class people, watching Our Perfect Wedding is not about celebrating black people in love, but gauging how good the couple is, or [how good] working class black people are at mimicking the ideal white wedding or the white wedding ideal.â€

I completely agree with Bongela on this, but having watched the show with my own family, I have also come to realise that how the Twittersphere watches the show is not the same as how my mother, and the people who take part and aspire to be part of the show, watch it.

For me, in myÂ middle-classness, thereÂ is aÂ preoccupation with seeing how far from a Top Billing wedding (read: how far from whiteness) the OPW weddings are. And I believe the producers of the show know exactly what they are doingÂ -Â benefitting from what the black middle class has been complicit in creating â€“making a joke of other black people, as Majola Majola puts it.

But for many who also identify as black middle class, OPWÂ is not a big joke. There are those whoÂ watch the show for a sense of belonging, something I only became aware of when I began to watch the show with my family.

Contrary to what the Twitterverse would have you think, OPW is not just a show people watch to make fun of other black people. People tune in week after week to see people just like themselves and their realities.

Sundayâ€™s episode has been heavily criticised for promoting rape culture and sexual violence, and rightfully so.Â But this isn’t the first time OPW has come under criticism concerning the sometimes disturbing relationships it portrays.

The episode before this featured a couple with a 24-year age gap, whoÂ started dating when Letta, the bride, was 17. Legally speaking, Howard, the groom who was 41 years old at the beginning of their relationship, is in the clear because according to Sexual Offences Act, the age of consent in SAÂ is 16. But this does not make his behaviour any less predatory.

Howard used to go to Lettaâ€™s parentsâ€™ house to watch television and then he â€œfell in loveâ€ with her. Letta was little more than a child when she wentÂ into that relationship, and questions must be asked about the power dynamics involved in a relationship with such huge age differences, and the issue of informed consent. Did she really fall for Howard, or had she simply been groomed for exploitation right under her parents’ watchful eye?

Earlier in the season, the OPWÂ also featured Thembi and Vusi, who started their relationship when Thembi was in Grade 11 and Vusi was a married man. She was also a teen when their relationship started, which brings to question the same issues of power, and questions about why a grown man would want to embark on a relationship with a child. What could they possibly have in common?

I am glad that people are outraged at the show, however, I cannot help but think about how far removed the outrage is from the couples that were featured, particularlyÂ Bavelile and Fanie. Their participation on the show shows that neither of them seen anythingÂ wrong with how and when their relationship started. This is because statutory rape, and rape culture in its entirety, is so normalised in our society.

I grew up knowing that taxi drivers, especially the ones with top of the range sound systems installed, are always preying on schoolgirls. This is why my parents made sure I usedÂ skofo (private transport) until my matric year.

I grew up in a community where older men were always on the prowl for young girls, where schoolgirls would date men who work in the mines and at the factories, so that these men could give them pocket money to buy â€œnice thingsâ€ or, in many instances, basic necessities â€“ much like in the case of Bavelile and Fanie. We don’t think twice about shaking our heads at these girls, and euphemistically labelling the men involved as sugar daddies. But in many cases these are not successful men wooing younger women, they’re sexual predators intent on grooming schoolchildren.

Looking back, I realise how I could have easily been the girl dating an older man and not seeing anything wrong with it. The only difference between me and Bavelile is the cushion provided by my middle class childhood. Because of extra-mural activities activities and going to a Model C school, I was not in close contact with the local taxi drivers in my area.

For Mzansi Magic not to find anything wrong with Sunday’sÂ episode and how they condoned rape culture by referring to the bride as “Sarafina”, a term used to describe the girls who older men prey on, shows how normalised rape culture is our society.

But much like how we as the middle class watch the show from a completely different angle, we must take into consideration how for many, Bavelile and Fanieâ€™s relationship is romantic. We are outraged at this perverse and unapologetic parade of rape, and rightfully so, but I can’t help but stop and wonder if this outrage is not a product of our privilege.

Does Bavelile know and understand why some South Africans were infuriated by her wedding, whichÂ she probably watched with pride? Does she consider herself a victim of rape? Does she see it like we do? Are we talking about this in a way that is accessible and understandable to her? Or are we simply taking her reality and talking at her, instead of withÂ her?

These were some of the questions I asked myself after watching the episode. I sat there, realising the safety that comes with my privilege and how my middle classness is a buffer for so much â€“ including not finding myself in her predicament. As I attempt to unravel all of this I am brainstorming ways in which we can talk about rape culture – which is so normalised that it is seen as just anotherÂ part of a typical South African love story – in a way that does not alienate those on whose behalf we are outraged.