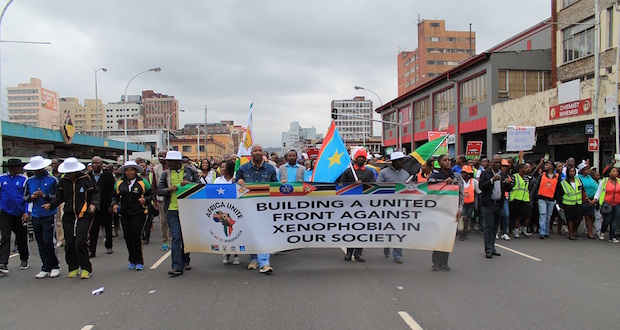 They may not pick up stones and throw petrol bombs, but the South African middle class is as guilty of committing xenophobia as any of the people who caused havoc on the streets of Isipingo and Jeppestown this month, writes PONTSHO PILANE.

The last few weeks has seen solidarity marches in the capital and beyond, with middle-class South Africans joining hands to say no to xenophobia on the streets and at their desktops. But can we recognise, for a moment, that the tendency exploit or speak ill of foreign nationals is not something reserved for the person throwing bricks in Jeppestown.

There seems to be this notion that xenophobia is something particular to post-apartheid South Africa, that it was born out of poverty and a struggle for resources in the past decade. But letâ€™s dispense with that. In his book, South Africa and Its People, Godfrey Makwikagile talks about how words like â€œmagrigambaâ€, which refers to African immigrants, was used in South Africa even before apartheid ended.

â€œEven though these words seem new to some people, I have been hearing them as far back as I can remember. My grandparents also say that these words have been in use for as long as they can remember,â€ writes Makwikagile.

Perhaps the reason why outright contempt towards African immigrants only started showing in post-apartheid South Africa is because before then, South Africans had a bigger common enemy â€“ disbanding the apartheid regime.

For people in townships and rural areas, resentment towards African immigrants is often fuelled by the lack of resources in their communities. The idea of having to share the little that is there with â€œoutsidersâ€ makes people resentful. People can be moved to use violence as a way to express their dissatisfaction because they have nothing to lose. But this disdain for foreigners goes back a long, long way and it pervades South African society â€“ not merely the unemployed and poverty-stricken.

The middle class is not as explicit in showing its xenophobia but it is there, nonetheless.Â Many employers will say they prefer non-South African domestic workers because â€œthey work hardâ€, but conveniently leave out the fact that they work hard for far less than money their South African counterparts would. They are vulnerable, because in many cases they are undocumented and desperate for some kind of income.

In lecture halls of many South African universities, it is the young and (fairly) educated who have contempt towards lecturers from other parts of Africa. I tutor first-year students and they are constantly complaining about a Nigerian lecturer, claiming that they cannot hear him.

A lecturer once told me that he had been advised by his head of department to â€œspeak slowerâ€ after students complained about his â€œthickâ€ accent. This criticism is not experienced by their European counterparts. In fact many students revel in the accents and pronunciation of their European lecturers.

The self-entitlement black South African men have over black women is also often xenophobic. I have dated a Nigerian and there have been murmurs about him â€œstealing meâ€ (as if I belonged to some South African man) and comments implying that I am drug mule or prostitute.

They may not pick up stones and throw petrol bombs, but the South African middle class is as guilty of committing xenophobia as any of the people who caused havoc on the streets of Isipingo and Jeppestown this month.