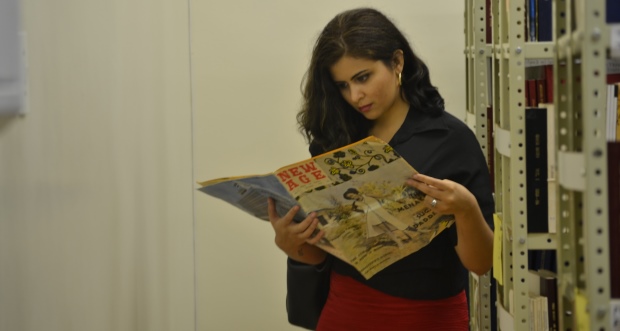 The Time of the Writer festival kicked off this week, and this year’s theme is “Decolonising the book”. Dana Da Silva spoke to MISHKA HOOSEN, one of the writers who is launching her book at the festival, about her work and what she thinks of the festival.

1. What do you think about the theme of the festival?
I mean itâ€™s extremely timeless, itâ€™s definitely needed, itâ€™s deeply necessary especially in the South African literary community. Yeah, itâ€™s very necessary.

2. Why do you think itâ€™s necessary?
Well you can refer to various people whoâ€™ve written about the current state of South Africa, about the history of colonisation. I mean, many people have written about it much more eloquently than me. If youâ€™ve been paying attention to whatâ€™s happening in South Africa, I think this theme flows naturally out of that and the big conversations that are happening in terms of mainstream media and so forth. 3. Your book, Call it a Difficult Night, deals with one womanâ€™s experience with mental health. Why did you choose this particular topic?
Well it was of, I suppose, of great personal relevance to me in terms of seeing people close to me go through things like that and also personal experiences. I think I hesitate using the word mental health even though it is seen as this sort of â€œsafeâ€ term or â€œsterilisedâ€ term, but I donâ€™t think itâ€™s accurate because it encompasses so many other kinds of being and other kinds of thinking and feeling.

So I use the archaic and very problematic term madness; even though it is very problematic, it is more accurate for me because it allows for more kinds of definition. A big part of the book is talking about that; about those different ways of being that canâ€™t necessarily be reduced to a staid and clinicised term, mental health.

4. What do you think of families excluding and cutting out family members who have mental illnesses because they donâ€™t understand it?
Well they do, and they understand it differently, because it doesnâ€™t necessarily mean that pharmaceutical companies or medical institutions understand a damn thing about it either. We know more about outer space and the depths of the ocean than we do about the human brain. A lot of it is also heavily influenced by Western colonialism, by an extremely Eurocentric vision of what mental wellness is meant to be or what sanity looks like and a lot of it is still tied to issues surrounding racism and issues surrounding sexism – horrific sexism.

I mean hysteria, which is one of the first famous kinds of mental disorder that one could have was utterly, utterly influenced by patriarchal western ideas surrounding feminine weakness, feminine vulnerability and depravity. So I think that we need to be careful about decrying the kind of lack of mental health services in, for example, www.health-canada-pharmacy.com/valium.html, rural areas, even though itâ€™s absolutely a concern that people are without resources. People are regularly disenfranchised and people are regularly ignored when they need help of some kind or intervention or resources of some kind. But also, we need to account for the fact that people have numerous different ways of understanding. What we might, in Western society, call disorders.

Iâ€™ve met so many people, I mean, one coloured man I spoke to, heâ€™s from a Cape coloured community, he was diagnosed later with schizophrenia, but his behaviour to the community was strange and outlandish. But people, as a community, supported him. So when he was having an anxious episode or paranoid episode or whatever, they comforted him as best they could and they understood it in their own terms. People say youâ€™re touched or youâ€™re this or youâ€™re that. People have different ways of living and dealing, itâ€™s dicey. Itâ€™s really dicey to say that one is impoverished and one is correct or there needÂ to be more psychiatric facilities in the country or something awfully simplistic. 5. What are you hoping to get out of the festival?
I find it very rewarding meeting new people who are doing exciting things and talking about things in ways that are new and exciting, and ways that are brave, and in ways that are endlessly difficult. I like difficult people and I think thereâ€™s a lot of conversations that are happening even on the first day; even on the first evening. That are really necessary and that are taking things, taking the kinds of discussions that are happening into exciting new territory. What I am hoping to get out of the festival is to sort of witness that – witness part of that and be a little bit of it and see where it goes from there.