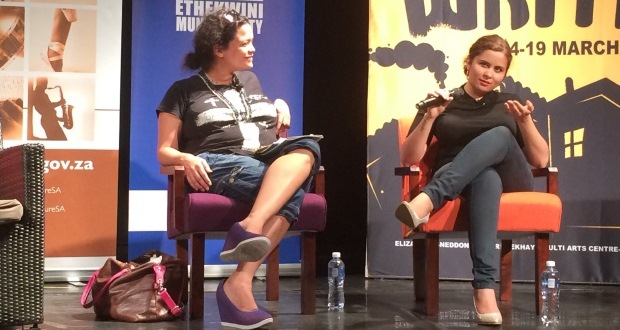 This year’s Time of the Writer festival has already served up fascinating conversations about what exactly knowledge is, and how we relate to books. But it’s also introduced us to exciting new literary talents like MISHKA HOOSEN whose debut novel “Call it a Difficult Night” was launched on Tuesday evening. Her speech at the opening ceremony of the festival was a searing critique of the ways in which black writers must navigate the obstructions of history, their own, and then also, the towering history of systematic oppression.

In considering the theme of this year’s festival I was torn between two understandings. The first, that this discussion, decolonising the book, is utterly necessary and timeous, and the second, that I cannot presume to speak on anyone’s behalf but my own. I know how much I hate it at these kinds of things when some vaguely brown woman stands up and makes a speech that is meant to represent my entire identity and lived experience, and so with your permission, I’ll speak from personal experience, trying to say one thing as well as I’m able.

I’m a woman, I’m queer, racially, I’m defined as coloured, though because of my accent, the product of Anglocentric and German and American schooling, I am sometimes simply regarded as “foreign,” even in my own country.

In discussions surrounding decolonisation at the moment, I’m encouraged to speak of myself in these terms, to speak AS a queer woman of colour. But that’s not what I am. That’s not to say that I have not been affected by these identities and categorisations, that I haven’t benefitted by numerous forms of privilege and been harmed by numerous forms of oppression, but it is not all I am, nor are they even the parameters by which I define myself.

A survivor of the Shoah, or Holocaust, Tadeusz Rozewisz, wrote a poem called “In the Midst of Life”. In it, language bears the scars of attempted annihilation, and is used to make the simplest and most fundamental statements: this is a table, this is bread, people eat to live. The man who picks that apple is my father.

Out of annihilation, out of the horror of history in its grand and banal cruelties, the world is rebuilt slowly, brokenly, with the simple and imperfect tools of words, simple saying of the physical acts of life. Bread for the hungry one. Sleep for the tired.

I am a coloured girl who was raped by a white man in my early adolescence. I know that it wounded me, that it stays with me to this day. I also know it’s history. The archetype of the colonial encounter. I also know it wasn’t just that. The man was a fascist. He was also a husband to a wife. Father to children. And I was a coloured girl from Newclare who won scholarships to rich, white schools where I could learn to write. I loved cherry lipgloss, and had a crush on Enrique Iglesias (please don’t judge me), I was a little girl whose laugh scared the birds.

As writers, our business is the saying of things, the watching and listening, or trying to. In the current discussions surrounding decolonisation, I fear, among us, writers of colour, a polarisation and demarcation of loyalties, a reduction of ourselves to archetypes that threatens to dehumanise us even as we seek our own liberation. The use of grand slogans to erase the everyday stories of people living, of people finding new ways to speak, new ways of power, of wounding, of healing. Because it’s there, it’s always been.

When protests reached a tipping point at Rhodes, where I was studying, I was doing fieldwork in the Karoo, in a small town where the lines drawn between races are physically tangible, where racism is viscerally felt everywhere, where I attended church services with people raised to look down on people like me, and sat with women in the coloured township while we peeled onions and talked about love, peeled potatoes while women washed children’s faces. And words came slowly and simply there. Through the Bible verses stitched with cheap wool on cotton or the songs on the radio. Even through vicious racism, and poverty, and so many kinds of violence, There were still couples kissing under quince trees, and there was still singing, and meals shared, and children’s hair being braided. And I thought, this, here, is where the revolution begins.

I found myself wanting to write myself into a new way of being, of imagining the world. Not defined by the grand sweep of history, saying I was a girl child of colour raped because of whiteness and privilege and toxic masculinity, not reducing myself to a figure, a bit part in a grand cause. I wanted to be the little girl who used to wear cherry lipgloss and sing to the radio. I wanted to listen to those simple stories of living, living in the face of supposed destruction. We must undo the colonisation of our thoughts, our vocabularies, that define us always in relation to the deaths that are acted upon us, the ways of divvying up and reducing and claiming. We must imagine a new way of saying, loyal to nothing and no one but life itself and the truth as we live it, captured by no cause, no faction. Our stories must never be tamed. Must always undo and reimagine. We are not the always dying, the forever-wounded. We must unmake the master’s tools.

Because when the history books count up the dead and the wounded, and name the great leaders, and all the grand ways in which to die, I want someone, someone everywhere to say, but this is how we all lived.