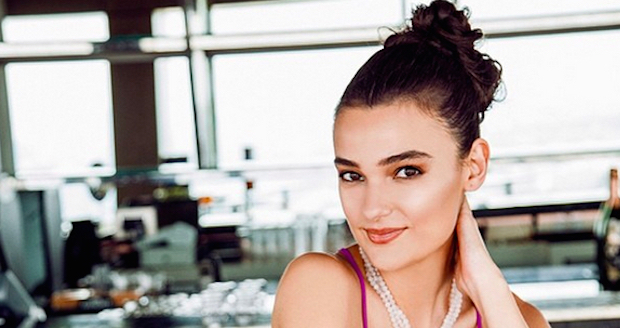 A former Miss Turkey, Merve BÃ¼yÃ¼ksaraÃ§, could soon be trading her designer threads and high heels for a jumpsuit in an unflattering shade of orange after she allegedly insulted her countryâ€™s president on Instagram. AAISHA DADI PATEL reports.

BÃ¼yÃ¼ksaraÃ§, who now works as an industrial designer and writer, posted a satirical poem on her Instagram page some time in mid-2014. The post, which has since been removed, subverted verses from the Turkish national anthem to criticise Turkish President Recep Tayyip ErdoÄŸan. But the former beauty queen denies that she did anything wrong. â€œI shared it because it was funny to me,â€ she told a prosecutor at an Istanbul courthouse, according to Turkish newspaper Todayâ€™s Zaman. â€œI did not intend to insult [the president].â€

The prosecutor demanded that BÃ¼yÃ¼ksaraÃ§Â be put under supervision as â€œthe remarks shared by the suspect could not be considered within the terms of freedom of expressionâ€, but this petition was rejected and the 2006 Miss Turkey was released pending trial.

BÃ¼yÃ¼ksaraÃ§ could face up to two years in jail if she is convicted. While her case has attracted international attention, due to her high profile, it is far from unusual.

SinceÂ ErdoÄŸan assumed the presidency in August last year after an 11-year stint as prime minister, more than 60 people in Turkey have been charged under the insult laws.

BÃ¼yÃ¼ksaraÃ§ is not the first to find out that fans and critics alike prefer their beauty queens to be seen and not heard. In January, Miss Lebanon becameÂ mired in controversy whenÂ she posted a selfie â€“ also on Instagram â€“ with Miss Israel in the picture.