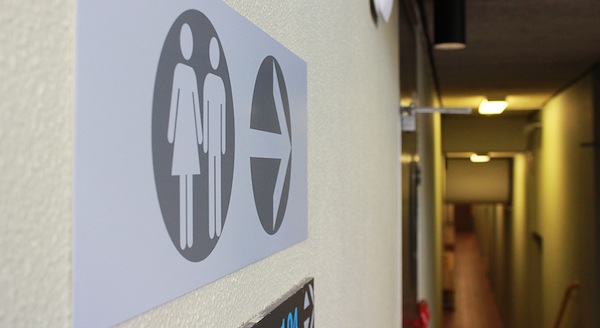 Last week the University of Cape Town (UCT) introduced gender-neutral bathrooms for students who identify as transgender or who abstain from defining their gender.

Nthabiseng Mokoena, a gender non-comforist andÂ the advocacy coordinator for Transgender and Intersex Africa, told Talk Radio 702’s Redi Tlhabi that gender neutral bathrooms are a safe and accessible space for students who do not feel safe in traditional bathrooms. Mokoena said people who do not conform to genderÂ binaries “don’t fit the norms of what society thinks is a man or a woman” and therefore need spacesÂ where they feel safe.Â

The bathroom, situated in UCTâ€™s popular Leslie Social Sciences Building, has sparked controversy. It contains two urinals and two cubicles. RAâ€™EESA PATHER found out what student thought of the changes.Â Maqhawe Madonsele, 19, student, Rosebank
I donâ€™t understand why the whole thing came about. I understand the being inclusive thing, but itâ€™s a bathroom, you know? I read somewhere itâ€™s because some people donâ€™t relate to one specific gender, but I donâ€™t see the logic. They arenâ€™t building new bathrooms, theyâ€™re taking the bathrooms that are here already and changing the sign. A woman shouldnâ€™t have to walk into a bathroom which is filled with urinals. It doesnâ€™t make me uncomfortable, I saw the sign the other day and if I need to go to the bathroom, Iâ€™m still going to go to the bathroom.Â Malaika Evans, 19, student, Cape Town
There shouldnâ€™t be labels on bathrooms anyway because labels create a lot of problems. I suppose itâ€™s very limiting but freeing at the same time, because people want to know â€œwhere do I goâ€, but weâ€™re all just humans and itâ€™s a bathroom. If you need to use the services of a bathroom you should be able to go through any door. I wouldnâ€™t be uncomfortable going to a bathroom with guys. Itâ€™s a bodily function, periods and going to the toilet, thereâ€™s nothing to be embarrassed about. I wonâ€™t feel embarrassed for what I have as a woman. If you feel embarrassed, thatâ€™s on you. Kumbirai Makanza, 21, student, Observatory
I think itâ€™s progressive, but itâ€™s going to take a while to get used to it. Coming from a traditional background, Iâ€™m just not used to it. Itâ€™s progressive in that itâ€™s pushing the boundaries, itâ€™s changing the way people think, so itâ€™s pretty cool. The toilet is a private space so maybe if you want to do something private or embarrassing, then someoneâ€™s going to overhear that. Sele Komana, 21, student, Observatory
Iâ€™m very indifferent about it. If people want it then hey, give it to them. I stay in a mixed res [campus residence] so I donâ€™t mind this whole mixed gender thing and sharing. I basically use mixed gender bathrooms every day because thereâ€™s guys in my res. It doesnâ€™t make me uncomfortable, because thatâ€™s my everyday life. Chadley Kemp, 19, student, Ottery
I donâ€™t really care. If I had to see a girl in the bathroom it wouldnâ€™t make much of a difference, I mean they have stalls for privacyâ€¦ If I have to see one of those tampon bins where girls put their stuff in, that would gross me out a little bit. I donâ€™t think it really matters though. Itâ€™s a bathroom, we all go there to do the same thing â€¦. I donâ€™t think itâ€™s a good way to address gender inequality or the way we relate to each other when we all go there to do the same thing. Carrie Timlin, 26, student and tutor, CBD
I think they make sense. I think it can make a difference to people who identify as transgender and transsexual. If thereâ€™s a man dressed as woman he doesnâ€™t have to feel like he has to make a choice every time heâ€™s faced with two different bathrooms â€¦

I can see how some people might be uncomfortable with the idea of men and women using the same bathroom and, I can see how â€“ with the crime risk and that sort of thing â€“ I can see how a lot of women might feel uncomfortable having men in their space. But at the same time, that stuff happens anyway, regardless if thereâ€™s a little man or a little woman on the door.