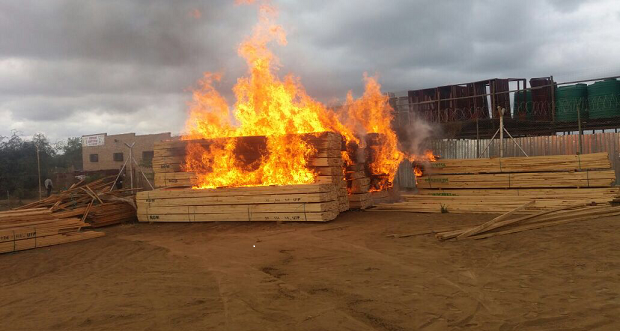 The situation in Giyani, a town in the north-east of Limpopo, remains tense as mobs of people continued to organise against businesses owned by South African Indians and foreign nationals in the CBD on Friday. More than 200 people are said to have been displaced by violent attacks against Indians and foreigners in the town this week, which also saw a mosque being burnt down.

The attacks are in apparent reprisal for an attack on three Zimbabweans on Tuesday, which left one man dead, while a second man died in hospital on Thursday afternoon. The attacks have led to several Indian-owned stores being targeted in arson attacksÂ and looting.

â€œAt an Indian-owned store, there were three guys who tried to commit fraud,â€ Â a concerned community member, who identified himself as Asif Talati, told The Daily Vox.

Giyani police spokesperson, warrant officer Thomas Makhubela, speaking to Jacaranda FM, said, â€œApparently the [arrested] suspects noticed that the receipt to collect goods was fake, they grabbed the victims and beat them. When police arrived one of them was already late.â€

â€œThere was a fight between the owner and the guys, one of victims died and the other one died in hospital,â€ Talati said.

According to the police, five people have been arrested in connection with the murder of the two Zimbabweans.

The reprisal attacks began on Wednesday with a hardware store being set alight. The looting in Giyani has affected a number of businesses and residents. The shops have been closed and street vendors at the market have also closed their stalls. This is a significant loss to the community as the townâ€™s CBD is the only place where people from the surrounding villages purchase their food and clothing.

Mohammed Osman, a spokesperson for the Indian Business Owners Association in the area, told Jacaranda FM that his organisation was concerned that “all Indians will be painted with [the same brush as] businessmen who break the law”.

He said shopowners were afraid to open their shops because of the ongoing looting. According to officers at the Giyani police station, all police officers were deployed to the CBD on Friday morning to stem the violence.

Talati, however, believes that this is just a group of thugs and not the community of Giyani who is responsible for the looting.

â€œIt seems like the community of Giyani is willing to work with Indians, Somalis and Pakistanis. They actually don’t want us to leave but it’s just a group of thugs that are taking advantage of this,” he said. Talati and other members of the community have taken the initiative to patrol the streets in an attempt to safeguard their businesses.Â â€œWe did have a group of people patrolling, to make sure the shops and houses are safe [and] to make sure other shops in the area do not get burnt down but this morning, as soon as we left, they burnt another shop,â€ he said.

Some Muslim family’s women and children are dropped to the safety zone and their men have gone back to #Giyani to help protect the Masjid.

I’m at #GiyaniCommunityHall Discussing the matter. all we want is Peace #GiyaniUnRest #Giyani

Images and video from Giyani residents and Asif Talati