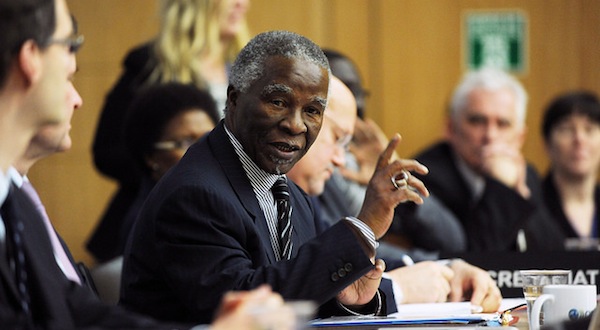 Former President Thabo Mbeki has said recalling ambassadors from South Africa and Israel would not solve the issues underpinning the Gaza conflict. Instead he has called for a mass mobilisation to boycott against Israeli goods. Mbeki made the commentsÂ during the orientation of a new intake of students at the ThaboÂ Mbeki African Leadership Institute (TMALI) at the University of South Africa on Monday.

During the event, a student asked Mbeki whether he thought South Africa was being “too diplomatic” with Israel and whether governmentÂ should cut diplomatic ties with the country over the attacks on Gaza.

Mbeki disagreed saying that in order to find a lasting peace, the South African governmentÂ -Â which has already been in talks with the Palestinian Authority as well as the Palestinian political parties Fatah and Hamas – now needed toÂ engage the Israeli government.

However, he said it is up to the South African people to heed calls to boycott Israeli goods and divest from Israeli companies.

“I think that call is correct,” he said, adding “We need to mobilise so that indeed Israel does pay a price for the position that it is taking.”.

You can read theÂ full transcript of his responseÂ below.