Home Sexism A manâ€™s place in feminism is behind the women â€“ and other...
WhatsApp
Facebook
Twitter
Email
Print 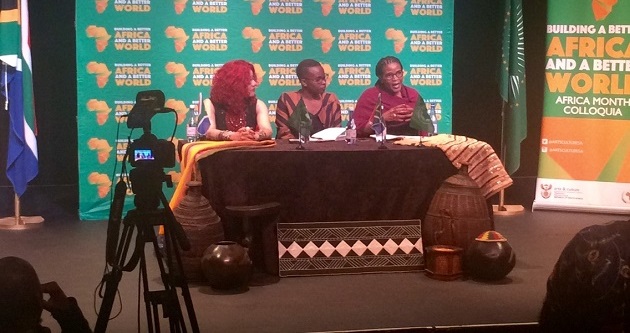 1. Do not trust anybody to tell your story
â€œDo not trust us to speak for you. Donâ€™t give your voice to us,â€ said Gasa. The panellists shared similar sentiments in that women donâ€™t need other peopleâ€™s voices to speak for them, and that there are feminist voices that defend patriarchy.

â€œI do not speak for the voiceless. Everyone has their voice but when you donâ€™t hear that voice, ask yourself why that is. Itâ€™s either theyâ€™ve been marganalised or denied a platform,â€ Eltahawy said. Those that find themselves in privileged protected spaces when they tell their stories, should fight 10 times harder for other voices to be heard.

2. Silence will not protect us
Eltahawy encouraged everyone to speak out against any form of oppression and fascism, including those found in religious groups. She encouraged women to call out and fight against misogyny and patriarchy in the spaces they find themselves in. Chigumadzi echoed the sentiment and gave an account of her personal struggle in speaking about and against oppression. â€œThere are contradictions within feminism and revolutions. The contradiction for me right now is between talking about being sexually repressed as a black woman and the ways Iâ€™m oppressed by whiteness,â€ said Chigumadzi.

â€œIntersectionality has been something that came out from black feminists and black queer women because they recognised the ways movements donâ€™t serve them. Removing the binary between working and thinking is a work in progress,â€ she added.

3. Black women march for everyone, but are never marched for
Chigumadzi shared that she cried after listening to BeyoncÃ©â€™s Lemonade album because she recognised her pain as a black woman, even though black women are discouraged from connecting to their pain because theyâ€™re told to be strong. â€œBlack women march for others but are never marched for. Our brothers that weâ€™re with during protests against racism and oppression in institutions will not show up for us when we march against rape. They watch from the sides,â€ said Chigumadzi.

Gender must be spoken about within the movements. It is tiring to be crying at racism and sexism, but no one will raise funds when black women cry. Itâ€™s important to affirm the men and women who stand up for women, especially when they cannot.

4. Women do not need saving from men
During a brief Q&A session, a young man from the audience asked where a manâ€™s place is in feminism and how men should contribute to dismantle the systems, to which Eltahawy replied, â€œA man’s position in feminism is behind me. I will not be liberated by the same people that hold the systems that oppress meâ€.

Men do not dictate the struggle women face and shouldnâ€™t dictate how women should deal with or express their pain or oppression. It was concluded that men have a voice in dismantling patriarchy, which begins with recognising each otherâ€™s pains before solidarity happens. â€œWe deal with oppression differently. We love black men but that doesnâ€™t mean weâ€™re not recognising the way they oppress us,â€ Chigumadzi said.

5. Feminism is not new, it just takes different forms
From the acts of Ruth Mompati standing up for herself against a man body-shaming her to everyday acts by women in older generations, feminism has always been here. “Weâ€™re not special. Feminism is not a new thing, itâ€™s always been there and it takes on different forms,â€ said Gasa, who also acknowledged women everywhere doing little acts of resistance and fighting patriarchy. The writers did, however, warn against perpetuating or replicating patriarchy while dismantling it.

â€œI was a feminist before I knew what it meant. I found the word on library shelves and that led me to finding out about other women from the same ethnic [group] as myself who were feminists,â€ said Mona.

Although the panel was cut short because of time, Gasa said she hoped present organisations noted down the issues raised to explore them further. The panel is part of the department of artsâ€™ Africa month celebrations.