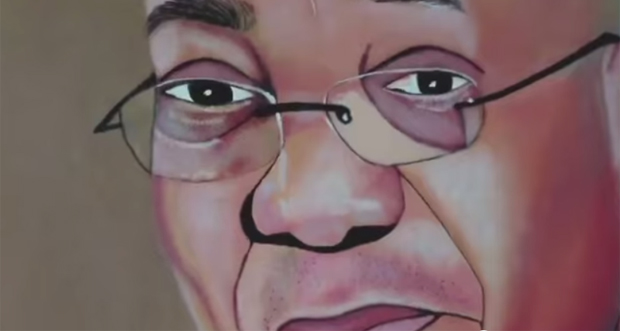 How should we respond to the Nkandla security video shown in Parliament? We could get angry; we could laugh (so we donâ€™t cry); or, we could listen to Sizwe Mpofu Walshâ€™s 2014 track, Mr President. Actually, weâ€™ve been doing just that since yesterdayâ€™s farce, and we strongly recommend you do too.Â

So, President Jacob Zuma is not going to pay back the money, after police minister Nathi Nhleko said he didnâ€™t have to. No surprises there.

But never underestimate our governmentâ€™s ability to reach new lows. What did come as a surprise yesterday was the demonstration video on Nkandla, firepools, chicken runs and â€œvital security featuresâ€ that Nhleko showed in parliament.

Keystone Cops set to O Sole Mio just about sums it up. But we have another, more appropriate soundtrack in mind: Mr PresidentÂ by Sizwe-Mpofu Walsh, aka Vice V.

Mpofu-Walsh originally released Mr President, a remix of a track by Tunisian rapper El GÃ©nÃ©ral, in April last year in the run-up to the general elections.

South Africans are waiting with baited breath for Public Protector Thuli Madonselaâ€™s response to the police report on Nkandla, which contradicts the findings of her own report, issued in March last year, that stated the president should pay back a â€œreasonableâ€ portion of the money used to upgrade his private home in Nkandla.

Heâ€™s right there, but unfortunately the public protector lacks the supporting political will for her findings to be enforced.

Which leaves us with a final question posed by Mr President: â€œWhere do you run when the presidentâ€™s a thief? Where do you go when the criminalâ€™s police?”

Let us know if you have an answer to that one, because weâ€™re stumped.

– Featured image: Screenshot of the video.