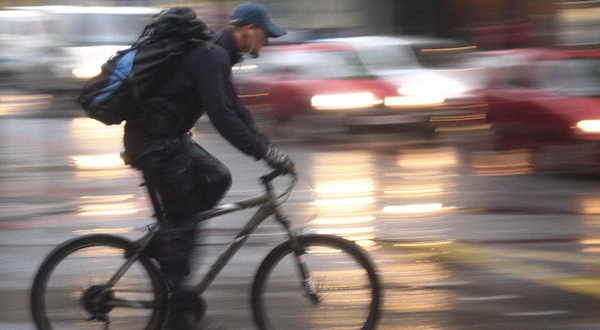 Two months ago, a GoPro video of a South African cyclist being mugged at gunpoint went viral on Youtube.Â Â In March this year, South Africans were outraged when footage of a group of cyclists assaulting a taxi driver was uploaded it to Facebook.Â Â The two videos are examples of a battle cyclists face every day: crime and road rage. As worries over safety mount, RAâ€™EESA PATHER asked cyclists how safe they feel out on the road. Â Mark Long, 49, Anglican priest, Newlands
I donâ€™t usually feel safe. I think cars are not usually aware of cyclists and they tend to pass too close by. Some years ago I had an experience in Pretoria with somebody who was actually trying to knock us off [the road]. I didnâ€™t realise at the time, but then I looked up and there was somebody [the motorist] had actually hit and the cyclist was doing cartwheels. I stopped cycling for about three years after that. I donâ€™t think cyclists are treated equally by car drivers, and I think we should be in terms of safety.Â Gary Fischer, 48, director of companies, Rondebosch
Iâ€™m strictly an off-road cyclist, itâ€™s just getting to the off-road thatâ€™s my problem. I understand the general hazards of being on the road with big, heavy metal things. The only other thing to worry about is being mugged. Thatâ€™s our biggest issue. Guys that want to take your bike off you for money. My mates have had experiences and we know plenty of stories. I sort of take my chances, but I think a lot of people wouldnâ€™t. Iâ€™m a little involved with this through my work; weâ€™re trying to get bike tourism going. Gavin Klerk, 42, director of companies, Rondebosch
Motorists are just busy. Theyâ€™re trying to get from A to B quickly and they see bicycles as getting in their way. Itâ€™s not the getting out and bliksemming (beating up) okes [thatâ€™s worrying], itâ€™s people getting knocked over. People donâ€™t know the size of their cars, they get too close to bikes, all that kind of stuff. They need more cycling lanes for cyclists to be able to commute. If they did that then I think it would be very safe, but with taxis itâ€™s not safe without that lane.

You get some idiots out on bicycles too, that are causing trouble, packing up around cars and causing shit for everyone else. Itâ€™s not a one-way street, I wouldnâ€™t say itâ€™s just motorists. Cyclists are full of shit too, they really are. Michelle Bettman, 21, student, UCT residence
Iâ€™m much more of a recreational cyclist, but I think when there is a sidewalk or a pedestrian lane then I do feel a lot safer. There are often times where you have no choice and you just have to go on the road and hope that the motorists are aware that youâ€™re there. They are going a lot faster and they donâ€™t have as much time to react, and they do have blind spots. So even though they donâ€™t mean to be harmful, I think thatâ€™s when accidents happen. I had an experience when I was very little where I was riding my bike with a friend, and we got stopped by a guy who was much bigger and stronger than us. He pulled out a knife and then took my friendâ€™s bike. That was a bit scary, so I think thatâ€™s probably my biggest fear on the road. Richard Simpson, 19, student, Stellenbosch
I do feel safe on the road. You get the odd motorist thatâ€™s not pleasant, but most people around Cape Town are pleasant. I think itâ€™s a bit of both – people being responsible and making sure theyâ€™re in the right place. Some cyclists are really stupid and do irritate motorists Some roads, like Constantia Nek, arenâ€™t really safe to cycle on, so avoid them.I think a lot of the behaviour by motorists are antagonistic, but thereâ€™s nothing much we can do. A carâ€™s more powerful than a bike, soâ€¦ Tony Bales, 50, property broker, Claremont
Most of the time I feel safe, but Iâ€™ve got to choose my cycling times. Earlier in the mornings or the evenings are safer. We have to choose these times, because quite a lot of people have had their bikes stolen recently.Â Iâ€™m not very comfortable with the muggings but Iâ€™m not going to put my life on hold for it. I just hope that the authorities can get enough resources together to help.

Iâ€™m easy with motorists. As long as one cycles responsibly most motorists are fairly accommodating. Thereâ€™s always the not-so-accommodating motorist, but that goes whether youâ€™re on a bike or in a car. A lot of motorists donâ€™t understand the way cyclists cycle. Yes, motorists are perfectly valid to hoot at people who are not in single-file, but byÂ the same token motorists do hoot even at cyclists who are cycling correctly, and they behave in an intolerant manner.

– Voxes are edited for brevity and clarity.