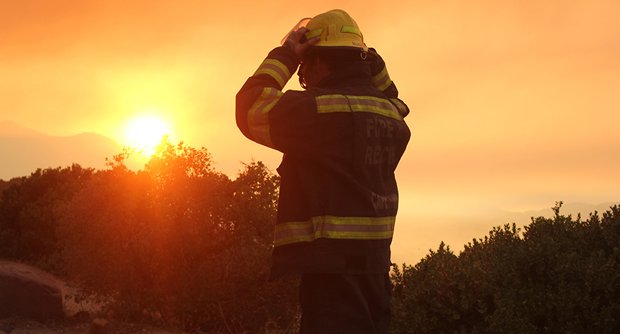 In the early hours of Monday morning, mountains around the Western Cape’s southern peninsula lit up in an inferno. RA’EESA PATHER was there to capture the blaze – and the brave firemen who are fighting it.

Hout Bay, Noordhoek, and regions across Boyes Drive and Chapman’s Peak Drive have been the worst affected by the fires that have hit the southern peninsula. Three old age homes have been evacuated and five houses have been lost.

As the fire continues to blaze, firefighters have worked tirelessly to contain the flames. Some areas of the mountain are currently code red, meaning that firefighters have to monitor the fire all night until they are relieved from duty.

“These guys [firefighters] are absolute flipping angels,” says Kevin Du Preez, a resident who lives at the bottom of Boyes Drive. “I’m not too perturbed about the fire reaching my house, because these guys are here.” More than a hundred firefighters have been deployed from the City of Cape Town’s Fire and Rescue Service. So far, one firefighter has sustained burn wounds and injuries from smoke inhalation, while others are working on shift rotations to contain the blaze. Lakeside Fire Station has become a central hub, where firefighters battling the blaze on Boyes Drive can reconvene. Just before 9am on Monday, a platoon of firefighters packed their vehicle with clothing, equipment and refreshments for the day ahead. Community members began to slowly stream into the fire station with donations for firefighters. By 5pm, on Monday, the station was packed with junk food, energy drinks, water bottles, and ice. A firefighter readies for the drive ahead. Blazes were raging in the early hours of Monday morning. After sunrise, smoke was left with pockets of fire bursting in various points along Boyes Drive. Smoke has remained a risk to firefighters owing to poor visibility and smoke inhalation.

Roads have also been closed in affected areas: Chapman’s Peak Drive remained closed on Tuesday, as well as parts of Boyes Drive. Ou Kaapse Weg was reopened after being shut down on Monday. The fire blazed high on the mountain above Boyes Drive on Monday. Firefighters worked to ensure the base of the mountain remained safe, so that nearby homes would be out of harm’s way. A firefighter waves goodbye to a platoon from Gugulethu Fire Station who had just been relieved from duty. The firefighters work mostly in 24-hour shifts. They begin duty at 9am. Once they get off, they have two days to recover. They can only leave the site once another team arrives to relieve them. Helicopters grab water from Kalk Bay Harbour in order to water-bomb blazes that firefighters cannot reach. Speculation has mounted that once helicopters retrieve water from the ocean, it means that all other resources have been depleted. The City of Cape Town’s disaster management team has denied these claims, saying that it is normal procedure for water from the sea to be used. Firefighters on Boyes Drive near Lakeside hose down the area to ensure that flames do not spark. The wind fanned the flames on Monday, but firefighters managed to contain the blaze. The fire entered its third day on Tuesday. In the early hours of the morning, the mountain above Chapman’s Peak Drive was an inferno. Concerned residents watch as the mountain blazes. Houses near Chapman’s Peak are a few hundred metres under the fire line. If the fire crosses the road, evacuation is imminent. A firefighters’ breakfast on Chapman’s Peak. Volunteers have been driving parcels up to the firefighters since the blaze began. A firefighter puts on his helmet. Each helmet is inscribed with its owner’s name. Early on Tuesday, fears abounded that the fire would cross onto the road. Firefighters managed to contain the flames, although Chapman’s Peak Drive still remains one of the biggest concerns for disaster-management officials. A volunteer hoses down the roof of the Monkey Valley Resort. Houses around Chapman’s Peak Drive have thatched roofs, making them more susceptible to fire damage. On Monday, the Tintswalo Atlantic Lodge was reportedly burnt to ashes. Workers around the Monkey Valley resort worked hard to keep the area surrounding the holiday spot damp.

“It’s terrible, it’s devastating,” says Trymore Madanire, a gardener who works at the resort. “It can be good for nature, so the grass starts afresh, but in the process it will be destroying animals. Think of a tortoise, which can’t run.” Jayson Alers has been working for 36 hours. “I want to go home and sleep,” he says. “But it’s code red, so we have to wait.”

He has only just arrived on Chapman’s Peak Drive, after spending the night fighting fires along other parts of the mountain. A relay pump is when fire engines serve as reservoirs to fill the water tanks of other engines. Up on Chapman’s Peak, a water hydrant from the street further down the cliff supplied water to one fire engine, which then passed the water on to another engine, and so on.

“We have to get this one right, because that’s our driving instructor right there,” a fireman says. Their job is demanding, but the firefighters remain in good spirits. Firemen from stations in Gugulethu, Belville, Brackenfell and Cape Town have worked together to combat the blaze. “Whatever’s left will eventually burn,â€ a firefighter says, looking at the vegetation on the mountain.

Disaster management and firemen have no expectations as to how long the fire will blaze. Tuesday marked an intensely hot day on the mountain, but the winds seemed to abate. Disaster management says that although the fires are still raging, they do not pose a threat to residents.

All images: by Ra’eesa Pather.