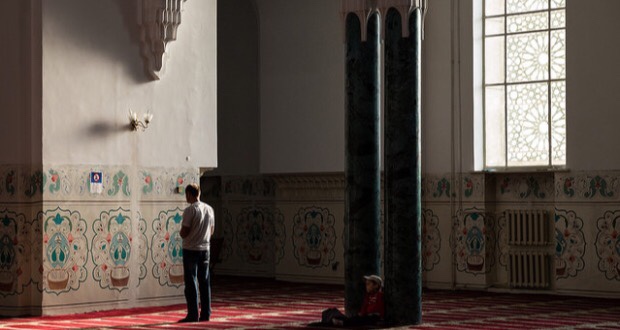 United States Army veteran, MUHAMMED MAQSOOD ALI KHAN was threatened at gunpoint at his local mosque in Hoke County, North Carolina, on the first Thursday of the Islamic holy month of Ramadan by a soldier in the US military. He explained to The Daily Vox what happened.

Madina Masjid is the biggest mosque in this area, and is about a thirty-minute drive from me. The mosque is doing a few renovations and because I have a truck, and the community had asked me to pick up a few tables from the local Wal-Mart. When I got to the mosque, it was quite empty and one of the doors was open. There was a packet on the floor and I thought someone had forgotten something, until I realised it was a packet of bacon. I looked around and asked, â€œIs anybody home?â€ and a Yemeni brother there, Abdullah, came out. I asked him to help me unload the tables and asked him if he knew who put the bacon there – it is forbidden meat in Islam, and definitely canâ€™t be cooked in the kitchen there. He didnâ€™t know, and we thought maybe somebody had forgotten it or displaced it. We definitely didnâ€™t think it was something as intense as a hate crime.

Abdullah put the bacon into the dumpster that we have behind the mosque and I went inside to pray. After I prayed I put my shoes on and went back to my truck, and a white SUV pulled in very close next to me. There was a guy driving alone, and this individual had a dark brown t-shirt on, like military camouflage, and I was in my army t-shirt because after dropping the tables I had intended on going to the gym.

He started shouting at me with a very foul language – I have never been exposed to this kind of language, even in the military. Maybe a very, very close friend might talk like this. Using the f-word multiple times, he said â€œwhat the f are you doing here?â€ I was quite shocked and had many thoughts come to mind. First I thought maybe this is a soldier and he knows me very closely but Iâ€™ve just forgotten because I have been retired for four years. The second thing I thought was maybe this is a labourer, but then I said a labourer wouldnâ€™t just use words like that. The third thing I thought was maybe heâ€™s a new Muslim and doesnâ€™t know.

I asked him, â€œWhat the hell are you doing?â€, and he said to me, â€œWhy donâ€™t you leave this country?â€

This was another shock. I told him that I work in the army and have just retired, and he didnâ€™t believe me, asking me which army. So I questioned him, â€œDo you think only white folks work in the army? Do you have a problem working with black people and Spanish people?â€ He said that no, he didnâ€™t have a problem; â€œMy only problem is working with the Muslimsâ€. So I asked him if he had a problem with Muhammad Ali and he said no, he should come back.

I invited him in – I told him to come to the mosque, bring his family, they were even welcome to break fast with us and get to know the Muslims. He said that he didnâ€™t want to, and began asking why we have security cameras at the mosque, and I told him that it was to protect the mosque from being vandalised. He stayed arguing with me about being in the army so I showed him my retirement military card, which he looked at and then said, â€œOh yes, you were a captain in the army.â€ I was in a hurry to get to the gym and then get home in time to break my fast, so I told him to give me his name and contact details so that I could contact him. He refused to give me his name, and I said, â€œAre you scared?â€ He said no, he was not scared – and at that point, pulled his gun out and flashed it at me.

I asked him, â€œWhy donâ€™t you give me a ticket and tell me which country I should go to?â€ â€œI will not give you any ticket,â€ he said, â€œbut I will kill you and bury you right here.â€ I said, â€œNo man, take it easy, this is a country for everybody, I defended this country for 32 years.â€

He said that there are two churches down the road and I said that they are my brothers and sisters – they can worship anything they want. This is a country I defended for this reason, trying to convince him. He said no I am not your brother, at which point I told him, â€œIf you believe in Adam and Eve, you and I come from the same place, unless you come from a different species.â€

The talking was just back and forth, so I told him to just wait, I would get a pamphlet on Islam and terrorism for him. As I opened the other side of my truck to get it, he started reversing his SUV. I told him to wait, and he said, â€œI am coming back to kill you.â€ Never ever in my 32 years of military life has a soldier spoken to me like this. I didnâ€™t want to panic anyone, so I didnâ€™t tell anyone. I went to gym and I went home and broke my fast and only then, I told my wife. She immediately called the people in charge at the mosque. They said that he had come back after I had left and tried to drive into kids who were playing, later chasing people and even following some to their home.

Someone had taken note of his licence plate and called 911, and the sheriff – who was close by – came by. At first, he told the police that he had just taken a wrong turn, but they later charged him and impounded his SUV.
(Note: According to the local paper, the accused, Army Reserve Maj. Russell Thomas Langford, faces charges of ethnic intimidation, assault with a deadly weapon, stalking and other counts in the incident at Masjid Al-Madina.)

This came right in the wake of us mourning Muhammad Ali, someone who really did a lot to show the world what Islam is about. We were all so sad about his death, even though we never knew him personally. This is a very tragic world that we live in.This thing happened, and just recently was the Orlando tragedy as well. Even in the Middle East, there is no peace – so many people are dying in places like Syria. There is a South African priest currently visiting our town and when I met him, he told me about the religious harmony that there is in South Africa. I would love to visit South Africa at some time to experience this harmony for myself.

*Editor’s note: The headline has been updated.