Home Features “My whole life has come to a standstill because of these court...
WhatsApp
Facebook
Twitter
Email
Print 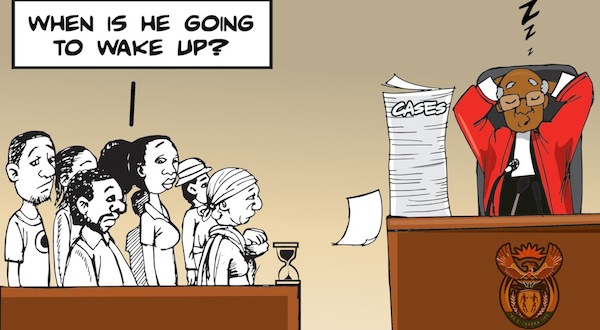 Ever wondered what itâ€™s like to be caught up in the South African legal system, or wondered what a person accused of a crime, or their family, goes through while waiting for their case to be resolved? BHEKI SIMELANE spent a day at the Protea Magistrates Court. This is what he found. Mapule Ntjangase, 31, White City
Iâ€™m here to support my younger brother but I cannot tell you what charges heâ€™s facing. Iâ€™m not sure if this ordeal will ever come to a close because this is his sixth appearance here but there seems to be no progress at all. This is a very painful moment for the family and a huge embarrassment too. The legal system in this country is very slow. They make people [stand] trial for a long time, even when they have gathered all the evidence they need. In my brotherâ€™s case they had all the evidence they needed but the case is still dragging on. There is another member in the family who has had a brush with the law. He had been arrested for armed robbery and even that case too took decades to conclude.

Samuel Nkombyane, 38,
Iâ€™m here to support my 17-year-old son who police picked up and arrested because he was in possession of a screwdriver. I have been attending [court] for so long Iâ€™ve actually lost count. The mystery is that when I got here today court officials told me my son does not appear on their system but still they will not let him go. This is a great inconvenience for me because Iâ€™m a security guard and I work night shift. I had to come here as soon as I knocked off from work in the morning because I did not want to miss the proceedings. I have been waiting since this morning, now itâ€™s 12 noon and still there hasnâ€™t been any difference.

From here I have to go straight back to work without even bathing and changing my clothes because obviously I will not have the time to go home to change. Iâ€™m sure you can imagine what Iâ€™m going through every day, as I still have to keep up with all his appointments with the court.

Apartheid might have been very bad but the legal system was a lot more efficient. Court officials and the government are failing us. There are a lot of people who are qualified to do this job. There is just too much corruption here and elsewhere, this is what causes the delays at times. I can tell you that the right people to be working here are not inside this gate but outside.

Mildred Shabangu, 77, Naledi
I came here with my granddaughter to support my son-in-law who faces charges of trespassing. He bought a house only to find that there was already an occupant when he tried to move into the house, for which he has been paying a bond for over two years. This is his third appearance here.

There are just too many delays in concluding this case and I do not understand why because this case is from 2010. In my view these people do not make time to study court files after they have remanded an accused person so that the next time the person appears they know exactly all the facts concerning [that case]. Court officials must give themselves time to study court files [to ready themselves] for the accusedâ€™s next appearance. Itâ€™s an embarrassment to the country to keep a woman as old as I am waiting for justice to take its course.

There isnâ€™t any other member in my family who has had brushes with the law. Court officials must pull up their socks or hand over the tasks to people who can handle them properly. There are many such people and they are unemployed.

Tsolofelo, 34, Â Jabulani
I am not sure of the details of the case but Iâ€™m here to support my boyfriend. All I know is that the case involves cars, whether itâ€™s car theft [or something else] I cannot say at this point. Iâ€™m not sure how many times he has had to appear in court on previous occasions but I know that police officers are the ones that are stalling the progress at times because they are generally corrupt, everywhere.

Everyone is busy preaching freedom but to me this is arrested freedom. Freedom is for a select few, those who are immune to prosecution by the court. I know what Iâ€™m talking about because my family and I have been wrestling the family home from an uncle who has since kicked us all out but I never got help from the police. Instead there were visible signs that they were talking to the uncle in private and God knows what they are talking about because we are the complainants in that case.

The service here is poor and officials cannot even provide the most basic information like the schedule of the times at which a loved one is to appear. The service really sucks. They should have people out here who will constantly update us rather that making us wait the whole day before they tell us itâ€™s become late and that there is nobody to attend to our cases. Today I came here at 9 am but at 1 pm there is still no sign [of when something might happen].

Sipho Simelane, 24, Soweto
I came to support my cousin. At the moment Iâ€™m not sure what charges he is facingâ€¦ I have been here since this morning and nothing is happening; as you can see all of us are just standing around. This is my cousinâ€™s cousinâ€™s sixth appearance and each time heâ€™s just remanded back into custody. What can I say, itâ€™s devastating for the family but at the end you reap what you sow.

I guess the South African justice system is at work but at a snailâ€™s pace. Itâ€™s like these guys here are on a go-slow. My older brother was once involved in a case of theft but I think the reason things were quick on that occasion was because the complainant never really followed up on the case after all his items had been recovered and my brother was let loose. There are so many delays but justice is being served, slowly. When you are faced with these problems itâ€™s difficult because itâ€™s a strain on the whole family and having to go through the courtâ€™s protracted procedure is a tedious and painful exercise.

Thabo Lekitla, 33, Protea North
I am actually here as an accused person and Iâ€™m faced with charges of assault after I had a fight with my ex-girlfriendâ€™s boyfriend when I went over to her house to see our seven-month-old baby. This is my first appearance in court ever. From what I have seen so far the South African legal system is very slow. I cannot even begin to describe to you what it means for me to be caught up in this embarrassing situation, the strain of having to attend court regularly.

I can see that my case is far from over as I have been made to run from pillar to post as court officials demand documents that I have no means of obtaining like a letter from a doctor. How can you be expected to run around from a prison cell, where will I get that letter because in the squabble I was the one who was hurt? But they will not consider that.

I guess I can say that the South African legal system works the way only these officials understand but this is about us citizens and not these guys in neckties who seem to be satisfied only with constant remands back into custody. My whole life has come to a standstill because of these court officials who are slow in progressing with my case. I was retrenched at Ellis where I was working. I should be using this time to look for another job so that I can be able to support my daughter like every father does. The local legal system sucks.