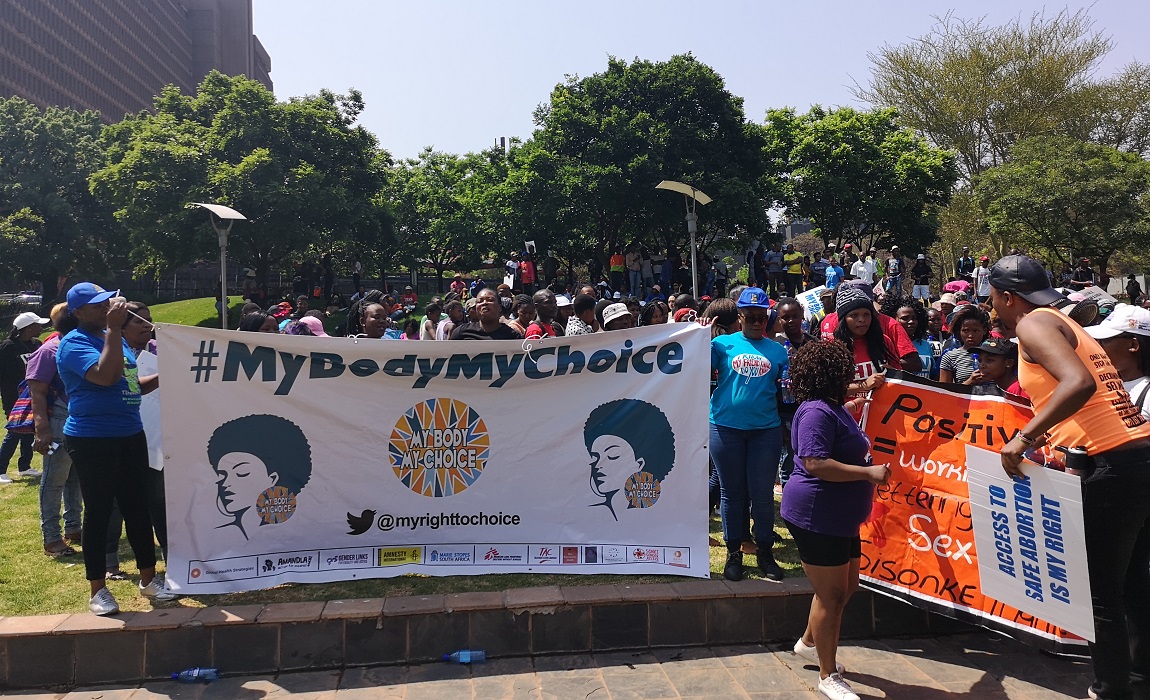 Cries of “my body, my choice”, “my vagina, my choice” and “phansi unsafe abortions” rang in the air in the name of the campaign #MyBodyMyChoice. A group of people marched from Theatre Park in Braamfontein to Newtown Park in the name of access to quality reproductive healthcare services on Friday. There, an event featuring speeches from experts in the field, panel discussions, personal stories of women, and a musical performance was staged. Friday September 28 also marked International Safe Abortion Day.

#MyBodyMyChoice: I’m here at Theatre Park in Braamfontein where folk are gathered to call for women and girls to have access to quality reproductive health services incl #SafeAbortion and contraception. @thedailyvox pic.twitter.com/kRJqs9IAim

The aim of the digital campaign #MyBodyMyChoice is to break the silence around abortion by connecting key audiences and create conversations around sexual and reproductive health and rights and abortion. It also aimed to emphasise that abortion is legal in South Africa and inform women about their rights and how to realise them.

“It being International Safe Abortion Day, in South Africa it is legal to have an abortion. But we still have abortions that are taking place illegally and most of them unsafe,” brands and communications manager for Marie Stopes South Africa, Whitney Chinogwenya said in an interview with The Daily Vox. “#MyBodyMyChoice is a really good message, it’s a really good cause to follow because we have the constitution supporting this,” she said.

In September, Bhekisisa the centre for health journalism at the Mail & Guardian published an article  on how some faith-based NGOs are breaking the law by refusing to give women information on where to terminate their pregnancies.

Twenty one years ago, South Africa implemented the Choice on Termination of Pregnancy Act (CTOPA). The CTOPA is known to be one of the most progressive laws in the world, and allows termination of pregnancy on request up till 12 weeks of pregnancy, and under certain conditions till the 20th week.

These obstacles mean that a number of women are compelled to resort to illegal and unsafe abortion from unlicensed providers, which leads to high maternal mortality.

“We just now need to start incubating and sharing information with the population,” she added.

Chinogwenya also said it’s important to bring men into the conversations around reproductive healthcare and safe abortion. “It’s not one person that’s responsible for it. Yes, it’s a woman’s choice what happens in the end but usually there’s two people in a relationship or in a sexual act. The more men that we bring into topics around sexual health, the better because then we can keep each other accountable and safe and having the right information about everything,” she said.

Marchers were in high spirits as they marched from Braamfontein over the Nelson Mandela bridge and into Newtown. Struggle songs filled the air and morale was high. Occasionally, the group staged sitdowns in the middle of the road to bring awareness to the cause of access to quality reproductive health services.

At Newtown Park, a short programme was held allowing the conversation around abortion and reproductive healthcare to progress.

One of the issues that cropped up was the way women are shamed for having sex and then shamed wanting access to reproductive healthcare services. “It’s my right to have sex. I can have sex how I want. It’s my body, I will choose who I give my body to. I have that right. I will choose if I don’t want to have that baby. It’s my right,” TAC chairperson Sibongile Tshabalala said to loud cheers in the crowd.

“I’m here because I’d like to bring the conversation around safe abortion and women’s reproductive health rights into public discourse,” member of the University of Cape Town (UCT) Amnesty International branch Aaliyah Vayez said in an interview with The Daily Vox. “It’s not not only stigmatised but is inaccessible to the women and femme bodies. It’s a conversation that takes place beyond the sex ed talk that you have in school.”