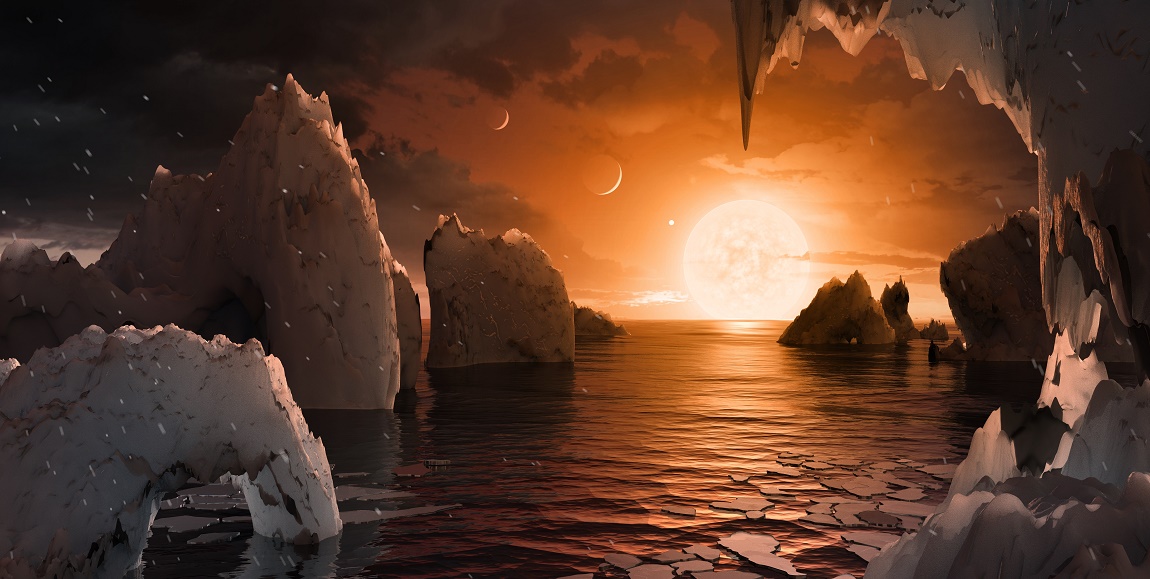 Forget a long time ago in a galaxy far, far away. Itâ€™s happening right now and in a galaxy a mere 40 light years away. No, Independence Day isnâ€™t coming true. Star Wars isnâ€™t either. Itâ€™s TRAPPIST-1. Â An entirely new solar system recently found by the big space guys we all want to be in the US.

Itâ€™s not an entirely new find – the same researchers found the solar system last year, actually. But the new find is even cooler. The ultra-cool (actual scientific terminology) planets have been revealed to be the right condition to sustain life. Three of these seven planets are located in the habitable zone, the area around the parent star where a rocky planet is most likely to have liquid water.

The discovery sets a new record for greatest number of habitable-zone planets found around a single star outside our solar system. All of these seven planets could have liquid water â€“ key to life as we know it â€“ under the right atmospheric conditions, but the chances are highest with the three in the habitable zone.

â€œThis discovery could be a significant piece in the puzzle of finding habitable environments, places that are conducive to life,â€ said Thomas Zurbuchen, associate administrator for the agencyâ€™s Science Mission Directorate in Washington. â€œAnswering the question â€˜are we aloneâ€™ is a top science priority and finding so many planets like these for the first time in the habitable zone is a remarkable step forward toward that goal.â€

Yes, thatâ€™s right. Life on other planets. How superfreakingcool is that?! We may not be alone after all. But before you go all nuts thinking weâ€™re going to be making the first contact with some light show out of Hollywood, letâ€™s hold our horses.

There may not be life there yet. But the coolest part may be yet to come. Even if life isnâ€™t ever found near TRAPPIST-1, it might eventually develop there. The star is relatively young â€“ even when our own sun has run out of fuel and our solar system is destroyed, the newly-discovered one will still be the equivalent of a baby just opening its eyes.

TRAPPIST-1 â€œburns hydrogen so slowly that it will live for another 10 trillion years â€“ more than 700 times longer than the Universe has existed so far, which is arguably enough time for life to evolveâ€, wrote Ignas AG Snellen from the Leiden Observatory, in an accompanying article about the discovery.

The first exoplanet was found in 1992. Since then, astronomers have detected more than 3 500 of the worlds, distributed across 2 675 star systems. In all, there might be 40 billion potentially habitable worlds sitting just in our galaxy, the Milky Way, astronomers estimate.So what this discovery means for exoplanet hunters is that the possibility of us being alone is not only diminished, but the hunt can now focus on a smaller area.

However, if youâ€™re thinking that they want to blow up the planet with one big bada-boom – it may not be them we should be worrying about. Remember what colonisers did to other people here on Earth? Yeah â€¦ you guessed it. Genocide.

So before you get excited about meeting your alternate universe self, hosting an actual Miss Universe contest, or making alien pen pals, remember, if we couldnâ€™t come in peace to each other, how can we expect a peaceful coexistence with other planets?

Just some food for thought while we imagine finding E.T. nibbling on his Mars bar somewhere out there.