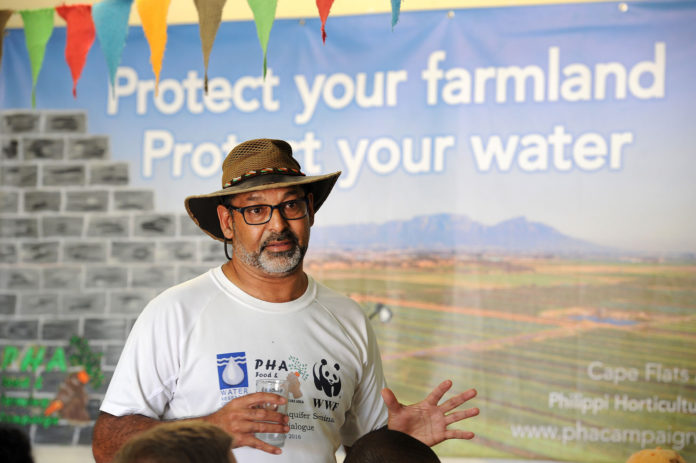 When visiting Table Mountain, you will find flat land that runs between the mountain into another mountain scape. The flat land which used to be underwater is part of the Philippi Horticultural Area (PHA). It is here that Nazeer Sonday farms the land producing food for the city. He is working to protect the land being threatened by developers, climate change and a number of other factors.

Sonday is passionate about the PHA and it’s not difficult to understand why. He was born and grew up in the area on his grandfather’s property in the area. His grandfather rented the land from a German farmer. On the land, there were crops, animals and even a cafe that Sonday’s grandfather used to run. The PHA was all that Sonday knew. Then, the 1973 land act became law under the apartheid government. Sonday and his family were forced to move from their land.

“I came back here in ‘91 and I bought a hectare of land close to where we used to live,” said Sonday. He wanted to put down his roots and expand the farming. That’s why for Sonday there is no choice about whether he wants to protect the area or not. “If I didn’t work to protect this area, I would again be removed from this area. Then in my lifetime I would have been removed twice,” he said.

For many years, Sonday and others from the community have been working to uplift and protect the area. The PHA Food and Farming campaign started by Sonday was initially a civic organisation. They were engaging the government around service delivery issues. Then the organisation developed to look at protecting the area and creating awareness around food production.

Read more: The Rise Of Urban Farming In Johannesburg

“Whatever happens in our area impacts directly on people outside of our area because this is where their food comes from,” said Sonday. The organisation is concerned with two main issues. They want to protect the agricultural land within the PHA. They are also concerned about the existing colonial farming practices. Sonday says that those practises impact negatively on the environment and do not deliver food security to communities. Instead, the organisation is working to develop farming methods which focus on small-scale farming taking inspiration from indigenous farming practices.

Read more: We speak to Khanya Mzongwana on growing food and your life

In a new podcast series by JoJo called Water For Life, Sonday is featured as a water hero. He says it is satisfying to amplify his voice around the issue of protecting the area. “In 2013, we realised that if we are to save this area, we have to be able to spread awareness about the importance of this area in the city and further afield in the country,” he said.

The PHA is very important for Cape Town but also South Africa. It supplies the city with around 200 000 tons of vegetables per year is produced in the PHA. Up to 80% of the carrots consumed in the city comes from the PHA says Sonday. Situated under the PHA is the Cape Flats aquifer. This is an underground body of water used to irrigate the crops. The aquifer also made the area drought proof – something that came in handy when the Western Cape faced Day Zero.

“Our area is where food comes from and if we don’t have this area, food will have to be imported from other areas and other provinces and from overseas,” said Sonday. Importing food means more expensive food with a lot of added carbon miles. The PHA ensures that people are getting healthy food without the environmental damage.

The importance of preserving the PHA goes beyond just its impact on the community. South Africa has limited land available for agriculture. Of that limited land many of it has been used up for urban development and mining and activities not related to food. Sonday says if there is no land available for farming, it means South Africa will need to rely on imported food.

“We won’t be a sovereign country,” said Sonday. He said there is a need to think about food when planning cities.

“More and more cities are doing that because of climate change and all the shocks that will come about like the coronavirus shock and the financial crash. This will impact on food availability. We need to think about how our cities are planned for food because that’s important,” said Sonday.

With creating cities that are planned for food, people need to be more connected to their food. Communities need to be asking where their food comes from. “Food doesn’t grow in supermarkets […] We have been disconnected from our food and I think to connect ourselves to our food we should be planting some food around our houses,” said Sonday. He says while having flower gardens are lovely, food needs to be grown in gardens. This will help people to connect to where the food actually comes from.

“Everybody should be engaging and growing some food to connect us to the soil and the question of food and nutrition,” he said. “It’s important to question where our food comes from.”