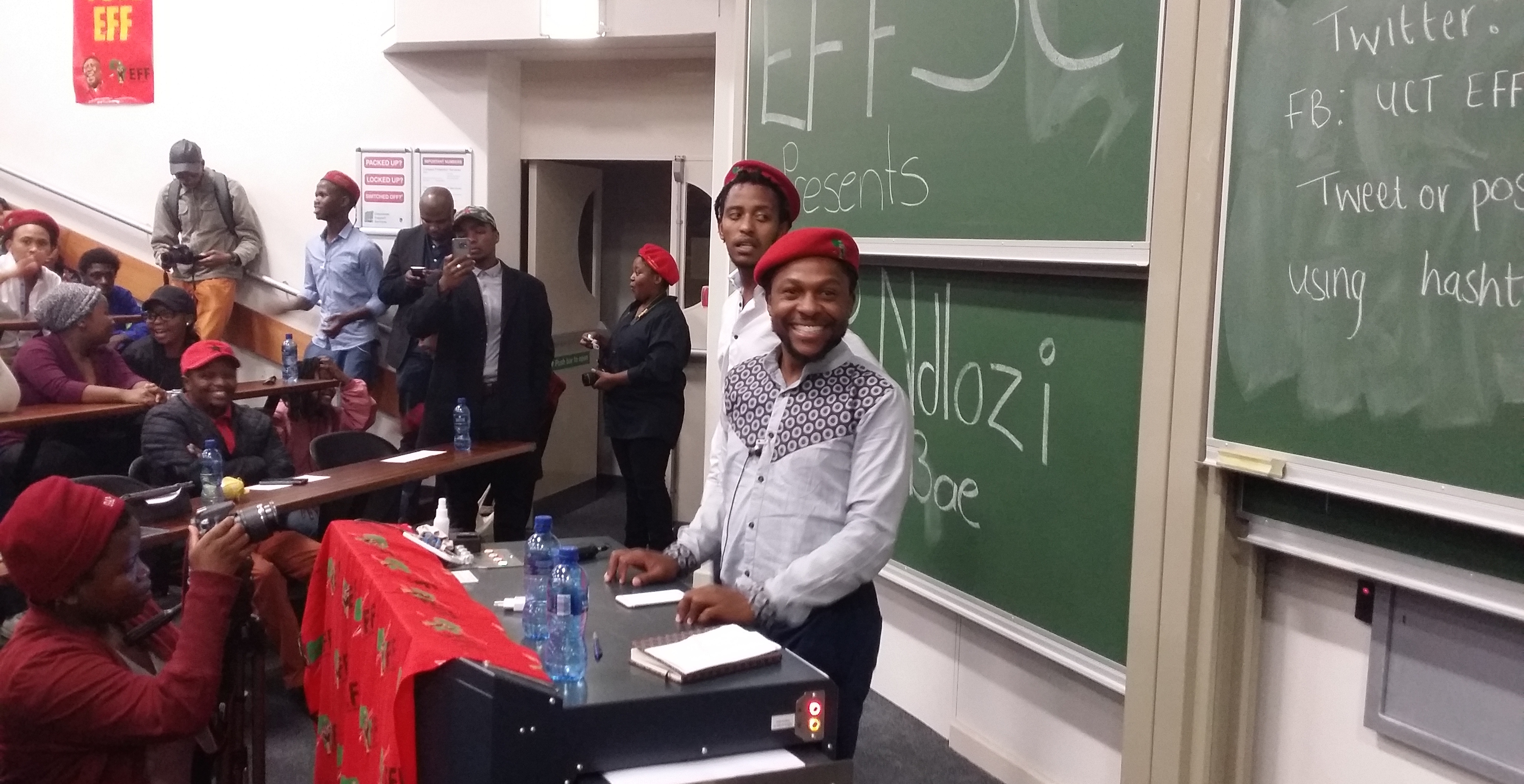 Economic Freedom Fighters (EFF) spokesperson aka The Peopleâ€™s Bae, Mbuyiseni Ndlozi gave a public lecture on post-colonial African liberation movements at the University of Cape Town (UCT) on Thursday. As some are perhaps unaware, Mbuyiseni is a Ph.D student in Political Sociology at the University of Witwatersrand. Hundreds of students filled the lecture hall over capacity to watch the charismatic EFF leader deliver the flames.

1. The EFF is trying to speak to feminist politics, but leaders such as Ndlozi still have a lot to learn

Ndlozi repeatedly called out the continued violence women face in South Africa. Yet, as some in the audience picked up, there was an awkwardness in his pro-feminist politics.

Compared to his eloquent and sophisticated rhetoric when discussing policy, dialectics and philosophy – his gender politics were quite clumsy. He more than once seemed to suggest that oneâ€™s sexuality, or having a non-binary gender, was a â€œchoiceâ€ – which upset the crowd. He also only began mentioning queer folk after being called out by an audience member.

This was disappointing considering that the younger generation of EFF members such as Naledi Chirwa and Simamkele Dlakavu are doing amazing work around gender and queer activism. However the work done by these young leaders is somewhat undermined by the older male leadership of the EFF – such as when Julius Malema lapses into openly sexist and misogynistic rhetoric in public.

While the EFF consistently speak out against patriarchy, one wonders whether their Central Command are open to taking the lead from the young women in their ranks.

The EFF refers to its political ideology as Marxist-Leninist-Fanonism – perhaps its time black feminism and intersectionality are included?

2. Post-colonial African liberation movements, such as the ANC, are not interested in true decolonisation – they simply want to take up the old seats of colonial powers

Drawing mostly from decolonial philosopher Frantz Fanon in his â€œPitfalls of National Consciousnessâ€ , Ndlozi highlighted African liberation movements followed a pattern that embodied by the ANC. This pattern is promises liberation through a radical restructuring of society, when in fact the true agenda is simply for the liberation movement to replace the colonial powerâ€™s positions.

#NdloziAtUCT Decolonisation for Fanon is the creation of new species, a new praxis of self. It is not substitution of white power for others

Mbuyiseni outlined true decolonisation was not the substitution of one power by another, despite the latter now being black. Rather, this tendency by national liberation movements was borne out of a desire to mimic the colonial masters.

#NdloziAtUCT : The policies of the ANC are founded on the mimicry of the West. In pleasing the West. As is seen in neoliberal policies.

â€œThe organising concept he [Fanon] uses is precisely â€˜national consciousnessâ€™ which he exposes as native bourgeoisie practice of self that is rooted in mimicry, laziness and nostalgia,â€ said Ndlozi.

3. The biggest damage of colonisation is that people are left unable to run their own affairs

According to Ndlozi, through colonialism, Africans were left with the idea that they cannot run their own lives and thus, without guidance from settlers, would fall back to barbarity.

â€œThe problem is not there! Rather it is in the actual fact that within their own ways of understanding humanity, they have excluded us as Africans and we are only included on the condition of their supervision,â€ he noted.

He argued that liberation movements such as the ANC, through its neoliberal policies, hoped to make the economy stable by opening up borders to foreign investors. This, according to Ndlozi, is another form of economic supervision – to try to get foreigners to â€œcome solve all our problemsâ€.

He said the solution was to empower and industrialise the South African people through economic self sufficiency which catered to self-determination.

4. The Land Question is important for three reasons besides taking back what was stolen by white people

Ndlozi highlighted that the EFF policy of expropriation of land without compensation, for equal distribution, is important for reasons besides the misleading narrative that blacks people wanted revenge on white settlers.

#NdloziAtUCT : We want the minerals for free education, free healthcare and reinvestment in industries controlled by foreign capital

Primarily, nationalisation of land is fundamentally linked to the issue of food sovereignty. According to Ndlozi, the majority of the food South Africans consume is not produced locally.

â€œIf Donald Trump tomorrow decided he wants to declare war on Russia, in three months there wonâ€™t be food in the shelves of South Africa,â€ he said.

Secondly, land is needed to deal with the matters of human settlement, legacies of spatial apartheid and the overpopulation of townships.

Thirdly, Ndlozi said minerals (gold, platinum etc) should be owned and utilised for the public good. According to Ndlozi, the importance of the minerals being nationalised lies their value in financing free education, providing better and quality public healthcare and financing local industry towards the production and manufacturing of products that better lives.

â€œYou go dig gold out and you think youâ€™re a powerful capitalist? Thatâ€™s lousy thinking and laziness. Go invent something and advance us to make our lives better,â€ he said.

5. The EFF believes economic protectionism is the way forward in industrialising South Africa

Ndlozi said the EFF wants investments from nationalising the mines to be redirected to those industries that are captured by white monopoly capital – particularly foreign capital.

#NdloziAtUCT : The policies of the ANC are founded on the mimicry of the West. In pleasing the West. As is seen in neoliberal policies.

According to Ndlozi, in South Africa, we import too much of what we consume and need to develop local industry in order to solve the issue of rampant unemployment in South Africa.

â€œOne of the lies the ANC tells is that we have no jobs because we have no skills, but let me tell you the people who are making teaspoons, smartphones and televisions donâ€™t even have a matric,â€ he said.

He said South Africans should be producing whatever we consume locally. The factories and production sites for these products should be placed in rural areas where people live.

In order to facilitate the growth of these industries, Ndlozi said high import tariffs strategically placed to aid infant industries were necessary. He said that this protectionism was fundamental in the economic development of the USA and many East-Asian countries – including China.