Home Fascination You need to get your hands on these comics that tell African...
WhatsApp
Facebook
Twitter
Email
Print 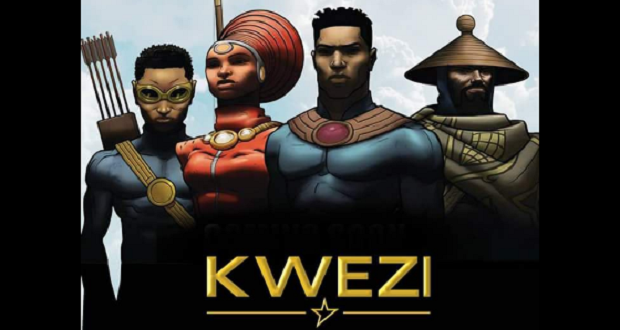 Comics havenâ€™t always been the best at telling complex stories with diverse characters. For example, when Black Panther came onto the scene back in 1966 he was more of a wallflower appearing in other characters’ comic books. Now, we donâ€™t only have a comic series dedicated to Black Panther, we have comic book creators throughout Africa telling African stories – and they are amazing. We round up some of the best comics to come out of the African continent.

Kwezi is a comic created by South African Loyiso Mkize who was a co-illustrator for the Supa Strikas series. Kwezi is a 19-year-old from Johannesburg who is your typical SA teenager – but his life changes when he discovers he has powers. Now he has to navigate living life in the city of gold while taking on the social responsibility for his powers. You can find the comic at Exclusive Books or check it outÂ here.

Look at what I just got!!

My very own copy of our first black Superhero comic! #Kwezi straight out of ðŸ‡¿ðŸ‡¦

Umzingeli is a bounty hunter working as an agent for an underground government organisation. Battling dictators, warlords, Somali pirates and corrupt ministers is all part of her day job. Created by Zimbabwean Eugene Ramirez Mapondera, Umzingeli is one badass Ndebele warrior who uses her staff to kick bad guy butt. You should be able to get a copy of it here.

#Umzingeli means hunter in #Ndebele a language spoken in #Zimbabwe the Title character is a Bounty hunter pic.twitter.com/4zL0XuWO3g

E.X.O. – The Legend of Wale Williams

Created by Nigerian Roye Okupe, this story is set in future Nigeria in the year 2025. Wale (pronounced Wah-leh) Williams returns to his home Lagoon City after being away for five years. He thenÂ goes on a journey to investigate his fatherâ€™s mysterious disappearance. Dr Williams, Waleâ€™s father, was an inventor and engineer who worked for a questionable organization called PryTeK – a global leader in innovation and technology.

Wale later finds out that his father left him a cryptic Nanosuit which gives him superhuman abilities. While he doesnâ€™t initially embrace the idea of being a hero, he realises that to find out the truth about his father and to save the city, he needs the suit’s powers. Buy it or read the first chapter here.

Mumu Juju is a Nigerian comic created by illustrator Etubi Onucheyo from Vortex Comics. Roughly translated as â€œmagical foolishness,â€ the story follows Mortar and Pestle, two spiritual servants who are trying to work off their debt to the god, Kenga. Kenga sends them on various quests to get magical items, which leads them into both mystical and wacky adventures. It is definitely a fun read, check it out here.

Champion of Dema takes place in the village of Dema where a champion is magically chosen at random every ten years to uphold justice and defend the village against evil beings known as soul-takers. When the comic starts, a new ten year-cycle has begun and Kade has been chosen as the new champion.

Kade is known as a young self-serving and opportunistic thief. He enjoys the celebrity status of being the champion, without wanting to do any of the work. Now the challenge is for him to accept his new role and the responsibilities that come with it. Created by Hameed Catel, this is a fun fantasy adventure story, which you can buyÂ here.

This is the story of Hilda Avonomemi Moses who was born in 1937 in the remote village of Etunor, a settlement in Ighara – but then she mysteriously disappears. She suddenly pops up in modern times without having aged and with no memory of who she was and where she has been, except for her name. What she also has is a mysterious companion and a gift to see spirits.The comic was created by Comic Republic, a online comic book publisher based in Lagos, Nigeria. You can read it online here.