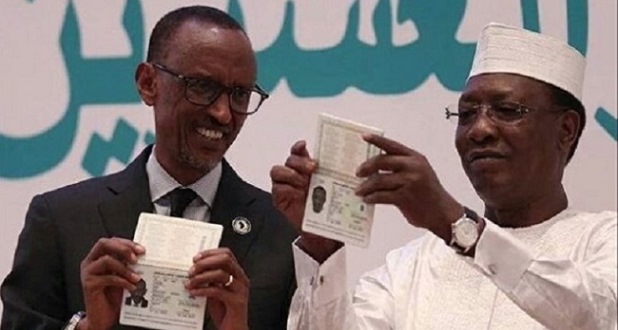 The passports will first be given to AU heads of state and government; ministers of foreign affairs; and the permanent representatives of AU member states who are based at the headquarters of the AU in Addis Ababa, Ethiopia. The Daily Vox looks at what exactly this African passport will mean for Africa.

For now itâ€™s for VVIPs only.

The passport was presented by the outgoing chairperson of the African Union, Nkosazana Dlamini-Zuma to the new chairperson, President Idriss Derby of Chad, as well as the Rwandan President Paul Kagame. The passport also has five languages on it – English, French, Arabic, Portuguese and Swahili.

What exactly is this passport going to do, though?
The passport is said to give holders visa-free access to all 54 African Union states which will make travels for citizens from any of the African states very easy and hassle-free. Currently, Africans need a visa to travel to over 55% of African states.

Even though the passports are at first only being rolled out to important dignitaries, the AU hopes to distribute these passports to all African citizens by 2018.

Several countries in Africa such as the Seychelles, Rwanda and Mauritius have instituted the open visa policy with remarkably good results. It is also hoped that this will be the first step towards greater integration in terms of perhaps a common currency as well.

Sounds cool, but will the thing actually work?
Look, the African Passport falls under the banner of the Agenda 2063 plan of action which is a â€œcall for action to all segments of African society to work together to build a prosperous and united Africa based on shared values and a common destiny.â€ It is hoped that the passport will help to bring about greater integration as well as free movement which will therefore help an increase in trade and economic growth.

It sounds fantastic to us. But not everyone likes a border-free world (See Brexit).

The establishment of the passport could however also be of greater benefit to heads of state instead of the man on the street, an immigration lawyer noted in an interview with Cape Talk early this month. So we’ll wait to see if Sudanese President Omar-al-Bashir is getting one.

On the whole, the idea of an integrated Africa where Africans work together to improve their lives sounds like a very good idea and something that should be advocated for greatly, especially if means that Africa can finally throw off the shackles of being controlled by others and actually use the resources on the continent for its own benefit. It may be a tiny step in the right direction.