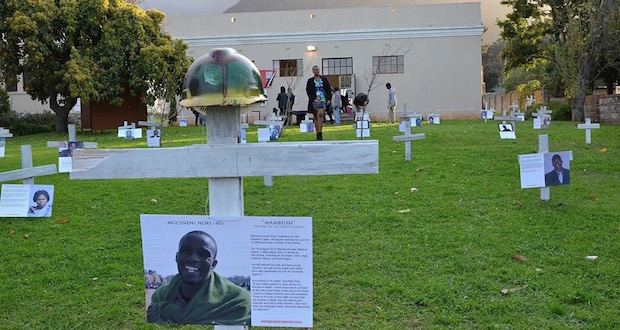 On Sunday, the National Minimum Wage Advisory Panel, which was put together by Deputy President Cyril Ramaphosa recommended in itsÂ report that South Africaâ€™s national minimum wage be set at R3, 500 a month (or R800 per week, or R20 per hour). The panel said that this amount was an effort to help combat inequality and poverty in South Africa, while mitigating possible job losses.

But not all are happy with the recommendation – and some are unhappy for quite complex reasons – so letâ€™s start from the beginning and unpack the discussion.

What is a national minimum wage?

A national minimum wage is, as its name indicates, the minimum amount that workers must be paid, across all sectors nationwide.

At the moment, there is no national minimum wage in South Africa – wages are set differently according to the job and business sector a worker is in. Part of this is done through collective bargaining between worker organisations, such as trade unions, and employers. This is where union representatives negotiate with employers, on behalf of workers, to arrive at a set wage.

For vulnerable workers that arenâ€™t represented by unions, sectoral minimum wages can be set by the Minister of Labour, who is advised on the matter by the Employment Conditions Committee (ECC). Minimum wages set in this way apply to different jobs within sectors and are called â€œsectoral determinationsâ€.

So, for example, the monthly sectoral determination for farm workers is currently R2, 778.83, while for domestic workers in more rural areas it is R1, 993.82, and R3, 660.27 for urban cashiersÂ in the wholesale/retail sector.

A minimum wage would set a â€œprice floorâ€ for all these sectoral determinations. The wages would thus be allowed to be higher, but never lower, than the national minimum wage. In the case above, the cashiers would not be affected – but domestic and farm workers would receive a significant pay increase.

Why is a national minimum wage important?

A national minimum wage is intended to combat poverty and inequality by providing a minimum threshold of pay to help protect the most vulnerable of workers – those who are not part of a union or whose sectoral determination is too low or does not exist.

Neil Coleman, strategies co-ordinator at the Congress of South African Trade Unions (Cosatu) told the Daily Vox that, while the national minimum wage is no silver bullet to deal with the structural legacy of poverty and inequality, it could make a very significant contribution to combating these issues – while also complementing the existing systems of collective bargaining. Quoting from the National Minimum Wage Research Initiative (NMWRI), Coleman said it is estimated that about 54% of full-time workers in SA earn below R4, 123 per month – the amount needed for a household to extract itself out of poverty, according to the paper.

â€œTaking their dependants, which is on average three people, into account means over 20 million South Africans – nearly half the population – are in poverty because the wages are too low,â€ said Coleman. Gilad Isaacs, the Coordinator of the NMWRI at the University of the Witwatersrand explained that SAâ€™s sectoral determination system is quite lacking.

â€œThe sectoral determination system we have now sets certain wages quite low and is also quite fragmented,â€ he said. International trends show that a number of advantages come from having a national minimum wage. â€œIt can be more easily enforced and it includes all the workers, whereas we currently have about a fifth of the work force that is not covered by any minimum wage. It also does not discriminate by setting lower level wages in sectors with higher numbers of vulnerable workers [who are mostly women and immigrants],â€ said Isaacs.

So the national minimum wage is an attempt to address some of South Africaâ€™s most fundamental problems – poverty, economic inequality and the lack of dignity afforded to the working class.

Having a national minimum wage sounds great, so whatâ€™s the hold up?

Well, there are some legitimate concerns. The biggest one is that implementing a national minimum wage may have a significant impact on unemployment – another of South Africaâ€™s fundamental economic problems.

Jasson Urbach, economist and director of the Free Market Foundation, told the Daily Vox that although the people pushing for a national minimum wage likely had noble intentions, the reality of the matter was that an national minimum wage would greatly harm our economy and contribute to workers throughout SA losing their jobs – and is thus not something that served the interests of SAâ€™s poorest and most vulnerable.

â€œI donâ€™t think you can just expect to artificially raise the wages of workers and not expect there to be consequences. I think employers act rationally, so theyâ€™ll increase mechanisation [replace labour with machines] as far as possible, increase the prices of their products or invest less in production in SA and rather invest overseas. And if they do invest less, it means that we wonâ€™t be able to expand and weâ€™re not going to be able to address this massive unemployment problem that we have in South Africa,â€ said Urbach.

In South Africa there are currently about 5,6 million people who are unemployed. If one considers workers that are discouraged and no longer seeking work, this number increases to 8,8 million people, which is about 36% of our population.

Coleman was very skeptical of the concerns expressed by Urbach.

â€œItâ€™s a tired old argument that they use, and it’s got nothing to do with concern for the poor or the unemployed. Itâ€™s a purely ideological position. If you look at the report of the panel, what they reflect is that credible studies internationally show that wherever a national minimum wage is implemented, the dire predictions – which the free-marketeers and other business economists have made on massive job losses – havenâ€™t materialised in any country,” said Coleman.

The National Minimum Wage Advisory Panelâ€™s mission is to find the wage level that â€œis the best level for minimising the danger of job losses while at the same time maximising the potential to pull people out of poverty.â€

Given the varying views on the effect that an national minimum wage will have, this is obviously quite contested. Labour unions such as Cosatu have long been demanding upwards of R4, 000 as the bare minimum, but acknowledge the implementation of R3, 500 a first step to achieving this. The National Union of Metalworkers SA (Numsa) has criticised the the proposed figure for being too low – while the Economic Freedom Fighters outright rejected it.

Yet the great pessimism surrounding the prospects of job losses and a shrinking economy – including from Treasury – remains real. To this end, the panel suggested implementing the minimum wage over two years from 1 July 2017 – the date when it will be legislated. Over the two-year period, employers will be discouraged from, but not fined for, paying wages below the threshold. Further, given the vulnerability of farm, forestry and domestic workers – whose wages would increase most significantly – the report proposes that, in the first year, farm and forestry workers be paid 90% of the national minimum wage while domestic workers ought to receive 75%.

The general sense, however, is that there should be a degree of caution surrounding the amount at which the national minimum wage is set, and that it should be adjusted accordingly as the local effects on poverty, inequality, unemployment, and the economy in general, are observed.

But for now, the question of whether the starting point for this endeavour should be R3, 500 remains the point of departure for the constituencies of the National Economic Development Labour Advisory Council, or Nedlac. The panelâ€™s report has given these constituencies, comprising of government, business, labour and civil society groups, until December 2016 to decide and agree on whether they accept the R3, 500 national minimum wage or not.