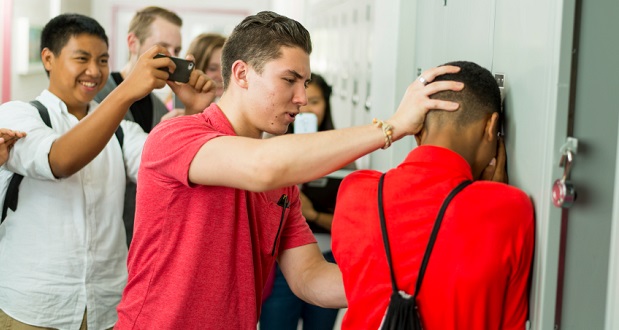 Early in December, a video circulated of a teenage girl being bullied at the LÃ¼ckhoff High School in Idas Valley, Stellenbosch. In it, a girl assaults another girl while her schoolmates watch and record the attack. This was the second video to emerge from the school in the space of a month.Â Each video contains a different set of girls, but incidents like these are not isolated: such videos have surfaced out of South African schools regularly. Why is bullying so prevalent in our society and how we can address it?

Bullying is unwelcome and violent behaviour that occurs between school-aged children and involves a real or perceived power imbalance. Bullying can be verbal, physical, or over social media and texting. A 2013 survey by consumer insights company Pondering Panda, showed that 57% of children feel they have been bullied. A further 71% of female and 73% of male learners said they felt threatened at school.

According to the survey, 52% of learners said they experienced bullying in the form of teasing and insults, 26% experienced physical abuse as bullying and 16% were cyberbullied via texts, email and social media.

Schools need to create safe environments for their learners

In 2015, the Department of Basic Education commissioned the National School Safety Framework, which provides guidelines on how schools should create a safe learning environment for their learners.

In it, the framework cites the â€œwhole school approach” to school safety saying that all parties – the principal, teachers, support staff, school governing body, learners, and the community – must all participate in eradicating violence from schools.

The Framework says that the national Department of Basic Education must take responsibility for monitoring and evaluating the safety of schools while the provincial department must ensure that all schools are trained in and are implementing its guidelines.

Why is bullying so prevalent in our schools?

Basically, children who are dark-skinned, poor and queer are often targeted by bullies.

With this in mind, the project aims to do anti-bullying work â€œusing an intersectionality lens but also decolonising the system of how kids interact with each otherâ€. Dhlamini has devised an anti-bullying curriculum that targets high school learners which she presents in schools across the Western Cape.

â€œI started Injabulo Project because my nephew, who is gay, was bullied at school. When I started the project I wanted to help LGBTQI+ kids. When I got to the school I realised that the problem of bullying was much bigger than that and I had to make it a general bullying project,â€ said Dhlamini.

The project runs weekly themed workshops at the school, for example rape culture in relation to bullying, which deals with slut shaming and victim blaming in an anti-bullying framework. They also offer a 24/7 support network, tutoring sessions, speech and drama workshops and referral services where they work with other NGOs in the Western Cape to access resources like counselling.

Today our #antibullying leaders are getting an intense much needed workshop on gender and sexual diversity hosted by @GenderDynamix #IABP pic.twitter.com/upBMxPfEQW

In Dhlaminiâ€™s experience, bullying starts at home but can be reinforced by teachersâ€™ attitudes and school policies.

â€œOne of the stories from one of my kids was that they were bullied because they were fat. When the learner went to report the case to the teacher, the teacher said â€˜No, you are not fatâ€™ but then the teacher started saying, â€™shut up fat one,â€™ and other kids would laugh and use that against the kid,â€ she said.

How do schools deal with bullying?

Gora Ebrahim, the principal of Auckland Park Academy of Excellence, told the Daily Vox how his school handles bullying cases.

â€œEvery year we have one whole week dedicated to anti-bullying in which students and teachers are expected to participate,â€ he said.

He said the school has tried to instil a culture of reporting incidents to authorities from learners to teachers to management. The teachers have opportunities to report bullying four times a week during morning briefing sessions.

â€œTeachers are expected to write out a report detailing the incidents of bullying that happen in the classroom and present it to the management,â€ he said.

But according to most of the learners Dhlamini works with, reporting bullying to teachers does not work.

â€œWhen you report the case to the teachers say, â€˜Oh no, you know how kids are, kids are mean,â€™ but kids are only mean because they get that meanness from home and/or from the school,â€ she said.

What about a childâ€™s home circumstances?

The Daily Vox also spoke to Misha Ramjanam, deputy principal at Marlboro Gardens Secondary School, who said that violence stems from the fact that the learners are exposed to violence at home.

â€œYou have to take into account contextual factors because when it comes to the violence, it always comes down to the fact that it often comes from home. For example, sometimes weâ€™ll call a parent in for disciplinary procedures and witness them hitting the child right in front of our eyes,â€ she said.

â€œWhen parents are abusive towards that kid or the kid is witnessing the violence at home and wants to take it out on other kids at school,â€ Dhlamini agreed. This is why perpetrators of bullying need help too.

Focus on the bully and the bullied

Dhlaminiâ€™s anti-bullying work focuses on the perpetrators as well as the victims. â€œWe work with the bully and the bullied,â€ she said.

Dhlamini said schools have the power to address bullying and they need to help bullies realise that their actions could have repercussions beyond school.

â€œThe school must work with bullies and punish them but educate them about the damage they are doing to others. We need to reform bullies so they can help others that are going through the same thing,â€ said Dhlamini.

Looking for inspiration as to how to use your #powerforgood this Anti-Bullying Week? We’ve got some ideas for you.. #antibullyingweek. pic.twitter.com/gtbsPAQaeP

Bullies need to understand the repercussions of their actions because when they bully others, bystanders laugh, and their behaviour is validated. Dhlamini said that her project tries to find out what makes the children want to bully and give the perpetrator counselling. â€œYou help that kid so they can help other kids,â€ she said.

Ramjanam told The Daily Vox that solving bullying as a society needs â€œbuy-in from all stakeholders.â€ She said that learners, teachers, parents and society as a whole need to come together and commit to anti-bullying.

#AntiBullyingWeek if you see someone being bullied step in don’t walk by. Some people need help, and bullies have to be stopped #endbullying

Dhlamini will be introducing her project to LÃ¼ckhoff High School this week. She is hoping to run her workshops at the school next year.

The LÃ¼ckhoff bullies implicated in the videos face disciplinary procedures in line with the school’s code of conduct. The case of the bully implicated in the first video went to court on 7 December and was transferred to the Child Justice Court in Stellenbosch where it will commence on 25 January 2017.

Disclaimer: The principal interviewed in this article is the authorâ€™s father.