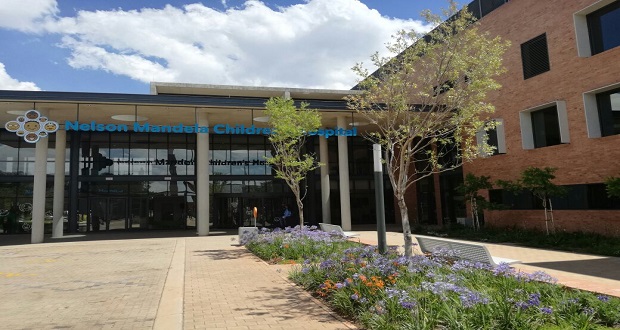 On Friday, with much excitement and celebration, the eagerly-awaited Nelson Mandela Childrenâ€™s Hospital (NMCH) was unveiled. The hospital was built at the request of former president Nelson Mandela who had a vision of a dedicated childrenâ€™s hospital from which no child would be turned away.

Located in Parktown, on land that belonged to the University of Witwatersrand, the hospital boasts state of the art facilities, brightly decorated wards and lush gardens filled with jungle gyms and fountains.

With 200 beds, the NMCH is a specialist and academic facility that operates on referral only. It features seven centres of excellence, namely: Cardiology and Cardiothoracic surgery, Haematology, Oncology, Nephrology, Pulmonology, Craniofacial Surgery, Neurosciences and General Paediatric Surgery services.

A young engineering student, Jed Aymler, has designed all the beds that will be used at the hospital ðŸ‘ðŸ™Œ #NMCHBringsHope

At the request of Madiba, the Nelson Mandela Childrenâ€™s Hospital Trust was established in 2009 with the task of raising money to fund the hospital. With global donors, corporations, citizens, children, and key partners, the money was eventually raised and the construction began on 22 April 2014.

The project is also special because it was spearheaded by three prominent women. Former first lady, GraÃ§a Machel, who is the chairperson of the Trust, Ms Nana Magomola, the deputy chairperson and Ms Sibongile Mkhabela, the CEO of the NMCH all played integral roles in the planning and execution of the hospital project.

In a media statement, Magomola said: â€œFor all of us who knew Madiba, we knew he was happiest when he was healing little hearts. This event, this moment, is a continuation of his love, and commitment to the welfare of South African childrenâ€.

Machel thanks Tata Madiba for the lessons he taught us, to love and care for and be in service of the children. #NMCHBringsHope

The hospital is neither public nor private; instead it has its own inclusive healthcare model that is centred around the wellbeing of children with a family-oriented ethos.It will serve children from all financial backgrounds and is in the process of putting together its team and testing its business processes and systems before its first patient can be admitted.

The #NMCH will be the first on the continent to feature a children’s radio station: Radio Lollipop ðŸ­ðŸŽˆ #NMCHBringsHope

The NMCH is supported by the Departmentof Health, and Health Minister Aaron Motsoaledi helped Machel launch it on Friday. The launch, was attended by prominent politicians, members of civil society, donors, trustees and, of course, the guests of honour: children. The inspirational launch was peppered with speeches and performances by schoolchildren and famous entertainers. It celebrated the legacy of Tata Madiba and those that contributed to his legacy with hard work, donations and passionate commitment.

Mokgoro: All of us with our commitment and passion will ensure that this hospital will be sustained. #NMCHBringsHope

All of us at The Daily Vox have nothing but well wishes for the new hospital. May it flourish, heal our children, and save lives!