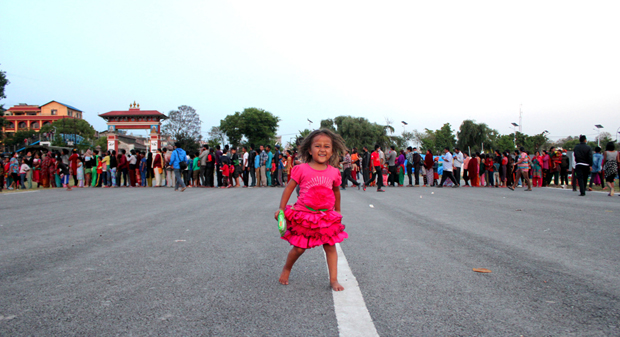 One of the biggest relief camps in earthquake-affected Nepal, situated in the capital Kathmandu, is currently providing shelterÂ to at least 10,000 people. Photojournalist SHOWKAT SHAFI was there to find out how people displaced by the earthquake are surviving.

On 25 April, Nepal was hit by a massive earthquake measuring 7.8 on the Richter scale. It has killed thousands of people, injured thousands more, andÂ destroyed almost 300,000 homes and heritage buildings in this Himalayan nation.

The Nepalese army is running one of the largest relief camps in Kathmandu at the Tundikhel parade ground, but it relies on local and international NGOs for donations of food and water. The affected people are living in different relief camps across the country. Estimates suggest 2.8 million people have been displaced by the earthquake. The biggest relief camp, where more than 10,000 people are living, is at the army ground inÂ Kathmandu.Â â€œWe took overÂ the camp on 27 April. The whole area was dirty as more than 11,000 peopleÂ spent two nights under open sky. Due to the efforts of many internationalÂ NGOs, we got access to water and sanitation and the make-shift toilets for bothÂ men and women. We are a team of 250 Nepalese army [officers] working in the camp,â€ said Prayog Rana, the Nepalese army colonel in charge of the relief camp. Children have been missing out on school and can be seen roaming around inÂ the camp. According to Unicef, nearly one million children in Nepal will not be able to return toÂ school. There is anÂ ever-present threat of an outbreakÂ atÂ the relief camp, where displaced people fearÂ contracting an infectious diseaseÂ due to a lack of access to clean waterÂ and sanitation. â€œWe are trying our best to maintain sanitary conditions, but with soÂ many people, it is tough. Attempts are being made to provide water-purificationÂ tablets so that water borne diseases can be prevented,â€ an aid worker said. The camp is severely overcrowded. Hera Bahadur Shahi and 35 family members are living in a single tent in the relief camp. InÂ some camps there are three or four families living together. The basic amenities of life are missing from the camp, including mattresses and bedding. Here, two children lie on a thin layer of foam, placed over cardboard boxes. Children, women and men form queues to receive food. The residents of the relief camps have been surviving on rationed foodÂ and water. Food here mostly comprises packed biscuits or slices of bread. The food is handed outÂ individually to each and every person. The Nepalese army, who are running the relief camp,Â distribute foodÂ twiceÂ a day.Â Water has become a major concern in this situation. â€œWe get water three times aÂ day (1 liter per person) and food twice a day. I donâ€™t know for how long we willÂ survive on biscuits and breads. We miss eating our rice with vegetables,â€ saidÂ Yogita Sheshtra, who is living in the camp. The tents were provided by Nepalese army and many international NGOs.Â Women at the camp say they feelÂ unsafe sleeping outside, in the tents, and sharing a livingÂ space with so many people.

â€œThese tents are overcrowded and uncomfortable. IÂ havenâ€™t slept properly ever since I came here, because I am always scared and IÂ feel unsafe sleeping like this,â€ saidÂ Dina Shahi, 35, whose house was devastatedÂ by the deadly quake and who now lives in a make-shift tent. The people are given biscuitsÂ or aÂ slice of bread two times a day and water three times per day. Colonel Rana, who is in charge of the relief camp, saidÂ itÂ is impossible to provide food to these displaced people living there without the help of international NGOs. Many parents are worried about the future of their children as they are missing out on going toÂ school. People spend their day talking about their memories of their houses thatÂ wereÂ destroyed by the earthquake.

Showkat Shafi is a freelance news photographer and has completed assignments for Al Jazeera English and The New York Times. He was born in Kashmir. Follow him on Twitter.