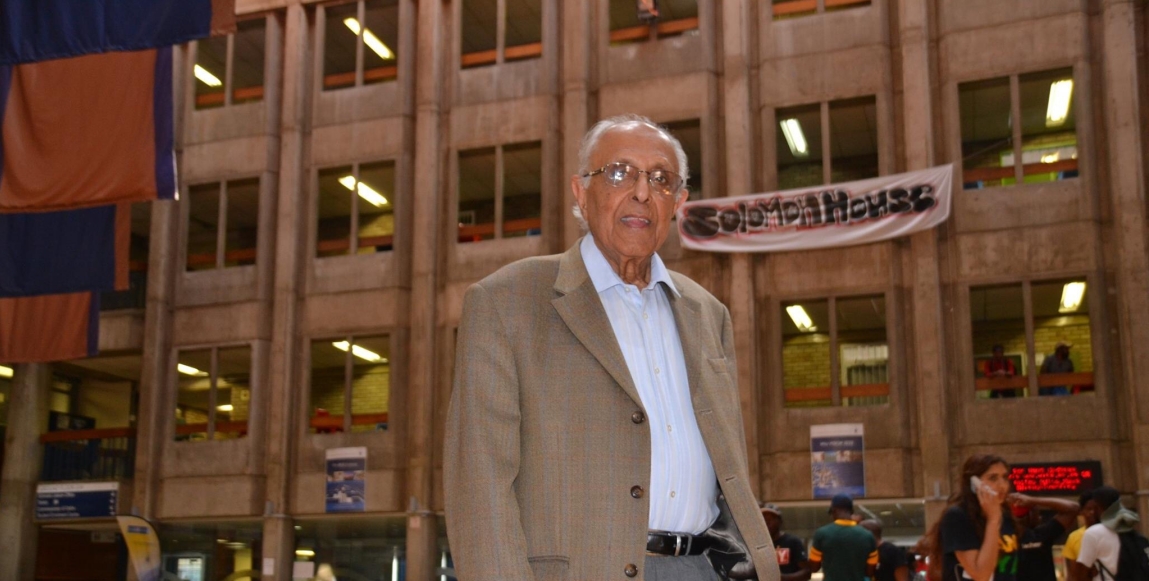 Student activists reflect on the legacy and impact of Ahmed Kathrada on their lives as young change-makers. While some students may not fully agree with his political line, each speaks to the character and sheer political will of Kathrada that left an impression on them to better engage in challenging the status quo. Brian Kamanzi, University of Cape Town
I first came across the story of Ahmed Kathrada through engaging with the story of Nelson Mandela. While my politics have changed considerably for those early years, the steadfastness and dogged sacrifices of the likes of Kathrada have most definitely impacted my attitude, thinking and actions. I have come across more of his political thought and trajectory, and while I might not agree with his political line, I find common cause and inspiration in what is clearly a sincere desire for an emancipatory future for this country from someone who has put their life on the line in ways I struggle to imagine. After meeting him in person, I found his eagerness and willingness to engage with young people in a relatively flat approachable way something to be admired and welcome in the context of a public space that is growing more hostile.

In my small environments, I have also noted a steady withdrawal of young Indian students in radical/left political spaces. I think it is important that we look to the past to hit the point home the centrality of being involved and making common cause with the most marginalised in our society in defiance of the privileges afforded to Indians by white society.

Irfaan Mangera, University of the Witwatersrand Growing up, I learned of the apartheid struggle from many prominent activists and family members that resided in my community, Lenasia. One such struggle hero was Uncle Kathy. Joining the [Ahmed Kathrada] Foundation was my first step to uncovering what lies beneath this national icon. On meeting Uncle Kathy I was taken aback. He was so full of energy despite being so old. This was a lesson on how not to allow your circumstances define you. His sheer humility, joyful presence and wisdom was moving. He often joked with us, and never failed to bring a smile to our faces.

I had the privilege of participating in the Foundation’s youth camp on Robben Island two years ago. I say privilege because Uncle Kathy gave us the tour of the prison and took us through all that they had to endure. In doing so, he sparked this courage in me. The kind that was willing to sacrifice for something bigger than myself. Aside from this, his ability to overcome and to resist was in part an education. Teaching us to value life and most importantly those that could not live freely of all forms of oppression.

His extraordinary being is one I continue to emulate. From living simply to challenging injustice wherever it manifests itself. From advocating for social change to tearing down racial barriers, Uncle Kathy remains a guiding star for many South Africans. His triumph of the human spirit is motivation for me to continue being an active member in society and to continue his legacy, knowing that he too was an activist from the age of 12, that believed in standing up for what he believed in. Alex Hotz, University of Cape Town
I know Uncle Kathy’s politics quite well. I’ve just been in contact with him a couple of months ago about the student movement. I think it was an important intergenerational conversation about the gap: what we can learn from the older generation and what the older generation can learn about us. There was a willingness from him to learn, to be in conversation with us and to impart his experiences in being part of the ANC and going to prison. It wasn’t an easy question – we were able to discuss and to disagree. I think that’s very important to be in a space where it was okay to disagree and to differ politically but also to be able to learn.

Uncle Kathy, like his generation, [shows] a resilience and that’s very important for us as young people who are politically active. We face a lot of challenges and struggle [but Uncle Kathy and his generation teach us] resilience and to continue the fight even when things seem better and not as challenging, to continue to think, challenge ourselves, learn and unlearn. I think what is clear, at least from the conversation I’ve had with Uncle Kathy, is that, “We weren’t perfect, we’re not perfect and there are lots of things we could’ve done differently.” That’s important. Also, as politics change as things change, to continue to fight. That’s what he’s done in his support of BDS [Boycott Divestment and Sanctions], in his support for Palestine. And to continue to challenge and critique the ANC even if though he is a member of the ANC. I think that’s important – that we are always critical. Amanda Mavuso, Tshwane University of Technology
I have learnt that courage, discipline and staying true to what you believe in can change a lot of things. Regardless of the fact that he was never really black but Indians were categorised with blacks, he never shied away from fighting for justice for all. Most of all, my situation might differ from another person’s but if there’s any injustice shown on someone else, I must fight for proper justice for another fellow human being. Dedication to what you love and have struggled for in never an ending journey. Those who came before us influence us because we are trying to correct what they’ve done wrong. Uncle Kathy played a significant role in inspiring the young people in this country by participating in the struggle at a young age.

Uncle Kathy is one of the thousands that volunteered to be arrested for at least six months. I mean it’s not easy for one [to] simply just sacrifice for the struggle. The long imprisonment that he was subjected to, it would never change him. I mean when he got out he continued to speak the same language. He was one of the most disciplined cadres. You would understand that the majority of these struggle icons, they started living big after the 1994 transition. But Uncle Kathy remained in the same position. I mean he continued with the same lifestyle, he never changed. He remained the same man that was known through the struggle.

He influenced some of us because of when you look at such people, you start thinking that there are those who are committed to the struggle indeed, not participating in the struggle for the sake of gain or self-interest. He did a lot for us. I mean in the sacrifices that he made, we tend to start thinking if people can sacrifice like that, why not us? I mean they played a role, we should do the same.